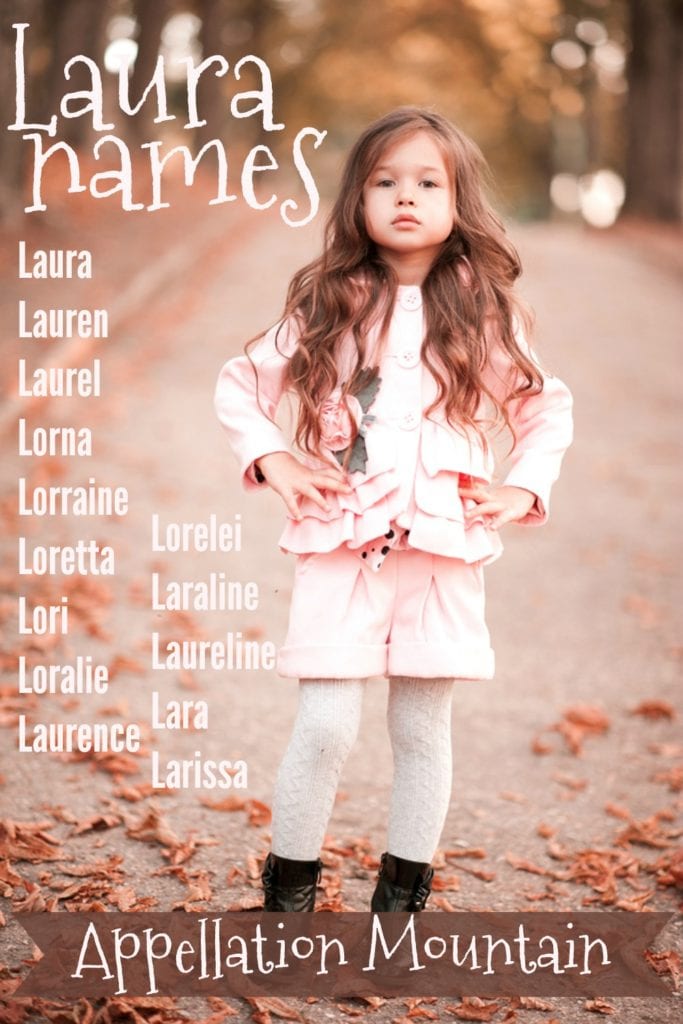 Laura names intrigue me, and here’s why: we often don’t give Laura the credit it deserves.

The name ought to be considered an enduring classic, a sister for Elizabeth or Mary. It’s appeared in the US Top 100 more years than not. And yet, because Laura enjoyed a surge of popularity in the 1960s, lasting right through the 1990s, we tend to dismiss it as dated. A mom name.

Nothing could be further from the truth. Saint Laura, an early bearer of the name, was martyred during the ninth century. Laura inspired Renaissance poet Petrarch. Canadian heroine Laura served in the War of 1812. Laura Bush became First Lady in the 1990s. And while Little House on the Prairie debuted on television in 1974, it’s set a full century earlier.

Like many a classic, there are spinoffs galore, from the recently popular to the truly rare. Unlike some classics, Laura names tend to be linked by sound, rather than the reoser Daisy-Margot-Peggy links name fans often know.

Let’s take a look at them.

Lauren – Lauren started out as a masculine spin on Lawrence and Laurence, but quickly became a favorite for girls. The reason? Lauren Bacall. Born Betty Jean Perske, the actress made her big screen debut opposite Humphrey Bogart in 1944. By 1945, Lauren ranked in the US Top 1000. From 1978 through 2014, it appeared in the Top 100. That’s a powerfully popular name!

Laurel – All of the names come from the Late Latin laurus, which means laurel. Victors received laurel wreaths in Ancient Rome, making it an auspicious meaning. Some parents discovered Laurel back in the heyday of Laura and Lauren, but it’s back again, thanks to our affection for nature names.

Lorna – Names like Lorna, with that awkward crunch, are out of favor today. We’re not into Bertha or Norma or Gilda, either. But I love the romance of the story Lorna Doone. Author RD Blackmore created the name for his novel, though today we mostly think of the cookie. Just 35 girls received the name last year.

Lorraine – Trailblazing Lorraine peaked in the 1920s. The French place name reached the US Top 50 ages before Brittany, Savannah, or Brooklyn caught on. Just over 100 girls received theme last year, making Lorraine one of the rarest Laura names.

Loretta – Lacy, retro Loretta caught our attention when Sarah Jessica Parker and Matthew Broderick chose the name for one of their twin daughters in 2009. Since then, the number of Lorettas born every year has doubled – actually more than doubled! Worn by an Oscar-winning actress and a country music legend, this 1930s favorite might be staging a comeback.

Lori – Lori ruled the 1960s and 70s, a cool girl name like Lisa. It served as a slimmed-down form of Laurie. While the name has tumbled from its peak in the 1960s, 133 girls still received the name last year – making it more common than Lorna or Lorraine.

Loralie, Laurelie – Spelling variations abound, making numbers difficult to track. But smoosh names formed from Laura and Lee are heard from time to time, too. While my sense is that they’re died to Laura’s peak use, they might find favor today, along with vintage names like Rosalie.

Laurence – Before you cry name theft, check out Meilleurs Prenoms. In French, Laurence is the feminine; Laurent the masculine. I hesitate to suggest it in the US, though, because Americans pronounce it just like Lawrence. The French say it more like lah RAUNCE. (I’m not doing that justice!) Still, it might make a lovely Laura name for the middle spot.

Lara – Lara fits right in with those short, sweet, pan-European names. We tend to think of it as Russian, thanks to Doctor Zhivago’s unforgettable Lara Antipova. And yet, the name also exists in Dutch and Hungarian and Italian, too – and more languages, besides. I’ve too often overlooked Lara on lists like this one, but it makes a good alternative to many of the most popular names.

Larisa, Larissa – Larissa lacks the Laur/Lor sound, but it makes this list because of Lara. In the ancient world, Larisa appeared in Greek legend as the name of a nymph, as well as a city in Thessaly. There’s also a Saint Larissa from the fourth century. The single ‘s’ spelling is closer to the original, but the double ‘s’ is preferred in English.

Lorelei, Lorelai – Lorelei comes from German, and bears no relation to Laura and friends. It’s borrowed from a mermaid/siren-like character in German folklore. It sounds like a successor to all of the earlier Laura names. Credit beloved television series Gilmore Girls, and the mother-daughter duo who share the name – for the rebirth of Lorelei. The series spells it Lorelai, which is gaining as an alternate version.

Laraline – Count Loraine with the rarities. I found only a few in the US Census records, and there have never been even five girls given the name in a single year – that’s pretty rare! But there is a history and meaning behind Laraline that could make it a compelling choice in our Adeline age.

Laureline – Upcoming movie Valerian is based on a French comic book about the 28th century adventures of two heroes – Valerian and Laureline. In France, parents have embraced the name in steady numbers since the comics’ 1960s debut. Now Cara Delevingne is set to play Laureline in the big screen version. Could the name be the next big thing?

What are your favorite Laura names? Have I left any off this list?