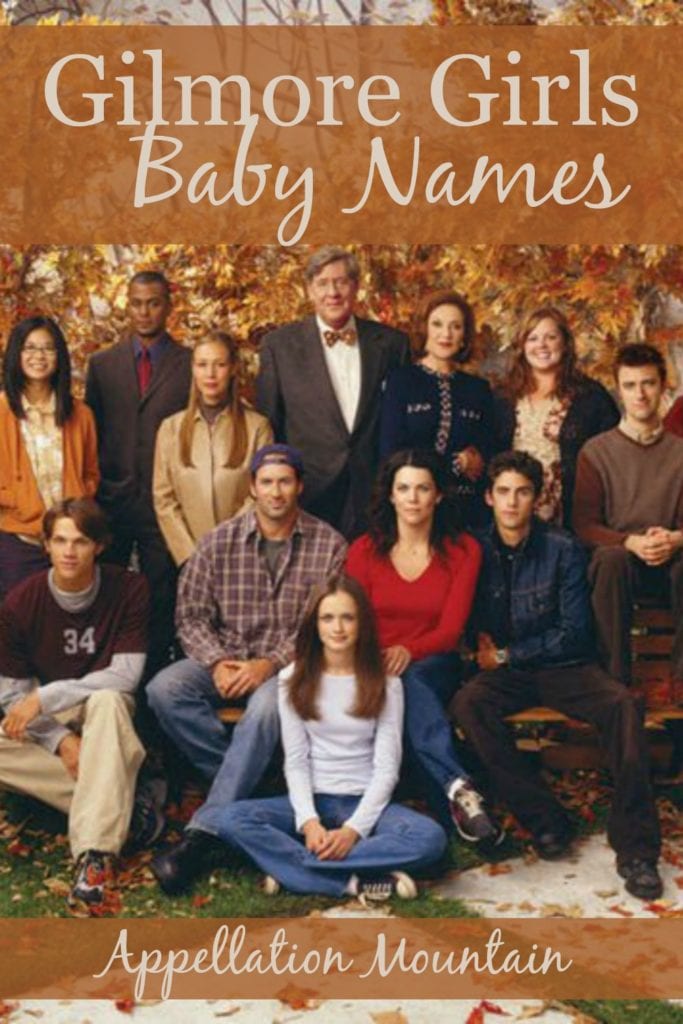 How could they not? The show’s premise involves a mother-daughter duo who share an unusual family name. The cast includes dozens of characters, from preppy, privileged classmates of the younger Gilmore to the quirky denizens of Stars Hollow.

Besides, the show ran for seven seasons, beginning in 2000 and ending in 2007. Plenty of characters married and started families over the years.

Now the show is headed back to the small screen courtesy of Netflix. There may be new characters added, but we’ll talk about that later this month.

For now, let’s take a rok at the best of the Gilmore Girls baby names from the show’s original run.

Lorelai – Lauren Graham plays the mom at the center of the series. She’s the first person introduced by the name. Her full name is Lorelai Victoria. More often spelled Lorelei, the name rose sharply in use following the series’ debut.

Rory – The second Lorelai we meet is introduced as daughter to the first, known almost exclusively as Rory. But since the first few episodes involve registering Rory at her new school, there’s conversation galore about how mother and daughter share the same name. It’s proof that the show’s writers included at least a few world class namers. We eventually learn her middle name is Leigh.

Trix – The show’s earliest conflict involves Lorelai and her mother, Emily. But a few seasons later, we learn that Emily’s relationship with her mother-in-law is no walk in the park. It also turns out that the mother-in-law is the original Lorelai, though she’s known to her loved ones as Trix.

Emily – Lorelai clashes with her mother, Emily, but the pair eventually reconnect over Rory.

Richard – Lorelai’s dad, a successful insurance exec who also bonds with his granddaughter.

Christopher – Back in high school, Lorelai and Christopher Hayden dated. He proposed when they found out Lorelai was expecting, but she declined. They have an on-again, off-again relationship for a few seasons.

Georgia/Gigi – Christopher eventually settles down with Sherry, and they welcome a daughter, Georgia called Gigi, a half-sister for Rory.

Gypsy – Mechanic to Stars Hollow, Gypsy appears at many a town event.

Jess – Luke’s wayward nephew comes home to Stars Hollow to stay with him, and becomes another love interest for Rory.

Lane – Lane Kim and Rory met in kindergarten. The daughter of super-strict Korean Christian parents, Lane struggles to find her way in the world. All ends well, though – she becomes the drummer for a rock band, marries the lead singer, and welcomes twins named Steve and Kwan in the final season.

Luke – From the first, Luke Danes is the every-guy, reliable and rock solid. He owns Luke’s, the Stars Hollows Diner where Lorelai and Rory regularly eat three meals a day. For years, Luke and Lorelai have an on-again, off-again, will-they, won’t-they romance.

Tillie – Tillie is the young girl who talks Luke into sponsoring a local soccer team.

Gilmore Girls: The Independence and The Dragonfly

Drella – Ella, Stella, and … Drella? In early seasons, Lorelai managed The Independence, a historic inn on the edge of Stars Hollow. Gilmore Girls fanatics know Drella for two reasons: first, she played the harp in the Independence during the first season. Second, Alex Borstein played Drella – but she’d originally been cast as Sookie.

Sookie – Sookie St. James rivals any chef in the area for inventive cuisine. She starts out as Lorelai’s BFF and colleague at the Independence. The pair eventually open The Dragonfly Inn together.

Michel – Born in France, talented concierge Michel comes across as difficult and uptight. But he’s loyal to Lorelai and Sookie, and goes with the duo to the Dragonfly.

Tobin – While Tobin appears just a few times, the night manager proves that the inns have plenty of staff besides Lorelai, Sookie, and Michel.

Louise – Madeline, Louise, and Paris are usually seen together, though Paris focuses on good grades, while Louise and Madeline are much less driven.

Paris – Overachieving Paris Eustace Geller starts out as Rory’s rival, but they eventually become close friends and head off to Yale together.

Francine/Francie – Among the most popular of the Chilton students, Francie’s attempts to recruit Rory for a school sorority cause problems.

Tristan – Tristan becomes an early love interest for Rory when she enrolls at Chilton.

Hanlin – Headmaster of Chilton, Hanlin Charleston is a dear friend to Richard and Emily Gilmore.

Finn, Rosemary, Juliet – Three friends to Logan, they are equally privileged and wealthy.

Jackson – We first meet Jackson Belleville as the producer supplier for The Independence, a farmer devoted to his craft. He eventually become’s Sookie’s husband, and they welcome three children together. While Jackson was already catching on as a given name in the era, I suspect the character added something to its appeal.

Davey – The couple welcomes David Edward shortly after their wedding.

Martha – Martha Janice Lori Ethan Rupert Glenda Carson Daisy Danny arrives a few years later. Sookie feels strongly that their family is complete with the arrival of Martha, so she uses all the names they’d considered over the years, even though Jackson was willing to save some of the names “for the next one.”

Baby #3 – As the series ended, the couple was expecting a third child. Here’s hoping we’ll hear the names of any new Belleville babies later this month!

April – Luke learns late in the series that he has a school-aged daughter named April.

Gil – Lane’s band includes Gil, played by Sebastian Bach. He lives in a neighboring town, and the band almost rejects him because he’s much older than them – but Gil proves to be a key member.

Macon – We meet Gil’s school-aged son just once, but I love the name they chose for him.

Pennilyn – We meet Pennilyn Lott just once, but hear about her for years. She dated Richard Gilmore before he met Emily; we later learn that Trix Gilmore far preferred Pennilyn. No explanation is given for the name, but it seems like there must be a story, right?

Okay, I’m still missing dozens of Gilmore Girls baby names! Which are your favorites? Would you use any? And what would you add to the list? Minor characters are fair game, too.

ALSO, a big shout-out to Kacey for correcting my spelling in the original version of this post! I had Lorelei spelled Loralei. Yikes!