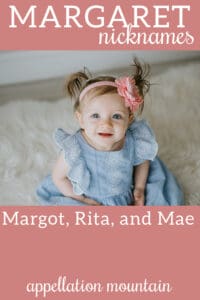 It’s not quite as versatile as Elizabeth, but it comes close.

After all, Margaret ranks as an enduring classic.

It comes from the Greek word margarites, meaning pearl, via the Latin Margarita.

Medieval Crusaders returned from the Holy Land with tales of the 4th century Saint Margaret. Legend told that she battled a dragon – and won.

The name caught on, and has been used steadily ever since. As it traveled across cultures and languages, Margaret nicknames – and variations – multiplied.

Today, Margaret feels accomplished. Figures like author Margaret Atwood and comedian Margaret Cho offer examples of contemporary figures. Not so long ago, Iron Lady Margaret Thatcher served as the first female British prime minister. The legendary Margaret Hamilton played the Wicked Witch of the West in The Wizard of Oz.

Odds are that you can name a dozen more notable Margarets – as well as women in your own life.

So let’s take a look at the best nicknames for Margaret, and the many forms of the name that could be just right for your daughter.

Of course, a great many Margaret nicknames stand on their own. Depending on the moment, some diminutive forms of the name have actually outranked the originally.

That’s true for Betty and Elizabeth; Kaitlyn and Katherine/Catherine; Molly and Mary; and so on. The most traditional version is often eclipsed by another form.

But the baby name Margaret is enjoying a modest comeback in recent years.

Just like the original, a long list of Margaret nicknames has climbed and fallen across the years.

From Maggie Simpson to Dame Maggie Smith, plenty of famous Margarets opt for this go-to nickname choice. While it does stand alone – Jon Stewart named his daughter Maggie Rose; Faith Hill and Tim McGraw went with Maggie Elizabeth – it also feels like the obvious, most familiar way to shorten the traditional name.

Of course, dozens of longer names, like Magnolia, could also shorten to Maggie.

If Margaret means pearl, why is the nickname Daisy? It sounds like a stretch, but the explanation is straightforward. The French version of Margaret is Marguerite. And in France, another name for the daisy flower is marguerite.

Screen legend Greta Garbo lends this name some glam. Garbo was born in Sweden, and Greta has a long history of use in Scandinavia. Unlike Astrid or Ingrid, this one doesn’t feel especially Scandi anymore. Instead, it’s a spare, intriguing, and straightforward possibility for a daughter.

Two decades ago, Gretchen was one of the Mean Girls in the 2004 smash hit movie. Tailored Gretchen has moved into mom name territory in recent years. There’s bestselling author Gretchen Rubin, known for The Happiness Project and other works on happiness and habits. While -chen indicates a cute nickname in German, in English this name feels capable and pulled-together.

May is a month, but it’s also short for many classic names for girls, including Mary and Margaret. While there are plenty of longer Mae- names, this is one choice that’s short, sweet, and complete. Both Mae and May are popular middles, too.

An alternative to Sadie and Millie, Maisie comes from Margaret via the Scottish Mairead, which sounds something like mawr aid or mur aid. While Mairead isn’t the most accessible name to American English speakers, sparky, retro Maisie feels exactly on trend. There’s fictional detective Maisie Dobbs, a creation of Jacqueline Winspear, to put a smart and fearless spin on this name. Henry James’ novel What Maisie Knew lends it some literary polish.

Ends in ‘o’ names for are stylish for girls and boys alike, but Margot occupies a special place. It appeals to parents who love vintage gems, traditional choices that haven’t been often heard in recent decades, even as it works for families seeking something modern in sensibility and style, too.

Drop all the excess, and the perfect nickname for Margaret might be Meg. It’s the version preferred by Little Women’s eldest sister, as well as the hero of A Wrinkle in Time. Why not Mag? It’s probably due to regional accents influencing how vowels were pronounced. Meggie is sometimes heard, too.

Most Megans are just Megan, but the name started out as a Margaret nickname. It’s easy to imagine Margaret becoming Meg, and then adding the familiar -an ending. While it’s widely used today, the nickname originated in Wales.

Remember the origin of Margaret, margarites? It makes Pearl a logical nickname choice. Scottish queen and later Saint Margaret of Scotland was known as the Pearl of Scotland. It’s a play on her name, but also refers to her charitable, pious nature.

Not so long ago, lots of Margarets became Peggy. Remember Mad Men? Margaret “Peggy” Olson couldn’t revive parents’ interest in the name, but never say never. There’s also Agent Carter from the Marvel Universe, as well as many others. It’s a confident, cheerful possibility.

In several languages, Margaret becomes Margareta or even Margaretta. Either makes Etta a baby girl name that works as a short form.

Drop the “Mar” and this name becomes the boyish Garet.

Margaret’s strong G sound opens the door to Gigi as a nickname. It might pair even better with the clearly French Marguerite.

As a surname, Greer comes from Gregory. Hollywood legend Greer Garson was born Eileen Evelyn Greer Garson; her future stage name came from her mother’s maiden name. So it’s a stretch to associate it with Margaret nicknames, and yet the sound is there. It’s even more true for the French Marguerite.

Speaking of Marguerite, it’s easy to hear how Grete comes from that version of the name. There’s also the Dutch Margriet/Griet, as well as other international forms. It’s sometimes pronounced like “greet,” with a long E sound. But just as often, Grete sounds more like Greta.

Gretel is forever trapped in a fairytale, the quick-witted sister who shoves the evil witch into her own oven, saving herself and brother Hansel, too. Both names are diminutives – Hansel for John; Gretel for Margaret. And somehow they’ve remained quite rare, at least in the US, even though we all know the names.

Old school nickname names Madge and Midge attach to multiple classic favorites. Fans of The Marvelous Mrs. Maisel will know that Midge is actually Miriam. Ages ago, Palmolive dish soap was promoted by Madge the Manicurist, a twentieth century version of Progressive Insurance’s Flo. Madonna fans might remember that she adopted this nickname while living in London. It appears that British publications used it from the early days of her career, possibly for the sharp contrast between the glamorous, young pop star and the middle-aged image of the name. But that would’ve over thirty years ago, meaning that maybe Madge’s revival is just around the corner …

Obvious Margaret short forms. The latter feels especially promising in our of age of Miles and Brooks.

Typically considered a cousin to Mary, Mara could stand as a Margaret nickname, too.

Like Madge, Marge is a former mainstay that’s stuck in the past. Just ask the blue-haired Marge Simpson, an animated character from the 1980s, modeled after creator Matt Groening’s mom, Margaret. (Though Mrs. Simpson is actually Marjorie.)

Margie edges Marge closer to Maggie and other sweetly vintage nickname names we love today. It sounds like a sister for Hattie, or an unexpected nickname for Margaret.

On paper, Margaux is just a fancy spelling for Margot. Except inspiration actually comes from Chateau Margaux, a wine from Bordeaux. Jack Hemingway, son of author Ernest, and his wife Byra enjoyed a bottle one romantic night. Nine months later, their daughter Margot was born. When she heard the story, Miss Hemingway decided to change the spelling of her name to match the wine. Margaux became a model in the 1970s, and a few parents embraced the spelling. It’s more popular now than ever, rising along with Margot.

Mame is a Broadway musical for a larger-than-life figure. Based on a 1955 novel by Patrick Dennis, it’s inspired, in part, by his Aunt Marion. Mamie is former First Lady Mary Geneva “Mamie” Eisenhower, whose husband served as 34th president of the United States from 1953 to 1961. It all makes Mame and Mamie feel quite midcentury. And yet, the incomparble Meryl Streep named her daughter Mary Willa in 1983. Nickname Mamie and now a successful actor in her own right, Mamie Gummer helps the name feel fresh and interesting today.

A logical way to shorten any name beginning with the letters Mar, Mare and Mari run right into Mary – though, of course, so do Mae and many others on this list. Actor Mare Winningham’s given name is Mary Megan.

Contracted names keep the first and last letters, and drop the middle. Marit is a Scandi form of Margaret; the spelling Maret is used in other languages, including Estonian. It’s tailored and unexpected. Princess Mette-Marit is the wife of the current Crown Prince of Norway, Haakon.

Actor Marlo Thomas started out Margaret, was nicknamed Margo, and then become Marlo when she couldn’t properly pronounce her nickname. It stuck, and now Marlo feels like a midcentury alternative to the fast-rising Margot.

Alfred Hitchcock’s 1964 movie Marnie starred Tippi Hendren as a con artist. It’s based on an earlier novel: Hitchcock gave his story a much happier ending than the original. The name rocketed into use following the movie’s success. The character’s full name was Margaret, forever wedding Marnie to the name – even if the sounds aren’t quite there.

Marta is usually considered a form of Martha. Except in Swedish, Margaret becomes Margareta, and Margareta is contracted to Marta – some of the time.

Borrowed from the boys, Marty feels like it would be a wearable stretch nickname for Margaret. Or possibly it makes Margaret a possible way to honor a beloved Martin.

There’s no shortage of formal names for Maddie and Mattie, but Margaret works, too.

Neither name is directly connected to Margaret, but it’s easy to imagine some forms of the name reducing to Mia. Margarita, for example, seems like a fit. As for Mila, when The Today Show co-host Jenna Bush Hager welcomed her first daughter, she was named Margaret Laura, after her grandmothers. Margaret doesn’t shorten to Mila quite as neatly without the Laura, but the association remains.

Take the last syllable, and Retta feels as possible as Etta.

Of course, Margaret’s last syllable might also lead to Rett or Rhett.

The last part of Margarita makes Rita a logical possibility. The Hollywood legend known as Rita Hayworth started out life as Margarita Cansino. While the nickname has been out of favor for decades, it peaked in the 1940s. Could it be ready for revival in another dozen years?

OTHER FORMS OF MARGARET

Actor Maggie Gyllenhaal’s given name is actually Margalit, the Hebrew form of the Margaret.

If not for the fruity cocktail, this would be a gorgeous name for a daughter.

The elegant French form of Margaret ranked in the Top 100 choice in the US from the 1890s through the 1921. Despite a long list of admirable women and literary characters, it’s been obscure since the 1970s.

What are your favorite Margaret nicknames? Would you consider any of these names for a daughter?