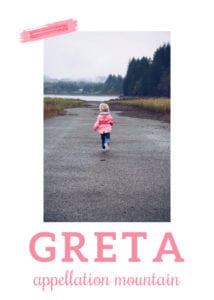 The baby name Greta belonged to a Hollywood legend, but today it brings to mind a world-changing activist.

Thanks to Abbey for suggesting our Baby Name of the Day.

The baby name Greta started out as a Margaret nickname, one of many. It occurs in German, but also Italian and Swedish. In fact, you’ll hear across much of Europe and throughout the English-speaking world.

You can hear Greta nested in Margaret, but a common variant of the name makes it even clearer how this nickname developed: Margareta.

It’s not the only diminutive starting with Gr. There’s Gretchen, a name that peaked in the 1970s and fell out of use not long after Mean Girls became an early twenty-first century sensation. Gretel, too, comes from Margaret, but despite Hollywood revamps of the classic tale, it’s never caught on in the US.

By twenty-first century standards, Greta feels more like a stand-alone name, independent from Margaret, but borrowing some of the classic name’s strength.

Greta Gustafsson became one of the world’s most famous bearers of the name. Born in Stockholm in 1905, you know her as Hollywood icon Greta Garbo.

She rose to fame in silent films, and became one of the few leading ladies to make the transition to talkies.

In 1930, Garbo earned an Oscar nomination for her first role with sound, as Anna Christie in an adaptation of Eugene O’Neill’s Pulitzer-winning play of the same name. More nominations followed over the next two decades, for Camille and Two-Faced Woman, but she never took home the statue.

Garbo retired in 1941, and attempted to live a low-profile, if luxurious, existence. We remember her uttering “I want to be alone” in 1932’s Grand Hotel. Later in life, she’d quibble with the meaning, emphasizing that her character wasn’t looking for mere solitude, but a certain freedom from demands.

Names fueled by the Golden Age of Hollywood – think Audrey and Ava – rose into the US Top 100 early in the 2000s. But Greta languished.

In the 1930s, at the height of Garbo’s stardom, the baby name Greta briefly ranked in the 300s. But it spent years out of the rankings entirely. It returned in 1999, but has yet to re-enter the Top 500.

It’s possible, of course, that some of the many Margarets answered to Greta. But Peggy and Maggie and Meg feel like the more popular options over the years.

In years years, journalist Greta Van Susteren comes to mind. So does actor and filmmaker Greta Gerwig, who has already racked up a handful of Academy Award nominations, most recently for Little Women.

But the most famous Greta of the moment is young climate activist Thunberg. Time named her Person of the Year, and she’s racked up Nobel Prize nominations, too – all while still in her teens.

There’s even talk of “The Greta Effect,” referring to a wave of young activists inspired by Thunberg’s leadership.

That might signal that the baby name Greta was already on the rise, before it made headlines.

Overall, Greta hits the sweet spot for lots of families. It’s familiar, easily spelled and pronounced, but relatively uncommon. That’s a trifecta! Add in that it is nickname-proof, offers plenty of history, and sounds feminine, but not too frilly, and I can imagine Greta joining names like Ruby, Leah, and Grace near the top of the charts.

What do you think of the baby name Greta? Would you consider it for a daughter?