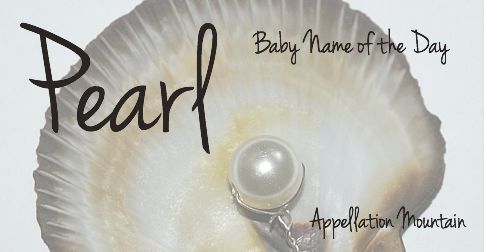 This post was originally published on February 21, 2009. It was substantially revised and re-posted on September 21, 2015.

It’s simple, elegant, and so much more than just a gemstone name.

Thanks to Kate for suggesting today’s Baby Name of the Day: Pearl.

Pearl: A Gem of a Name

Like many a precious gem, Pearl was first widely used as a given name in the nineteenth century. In the US, the name ranked as high as #24 in the 1890s.

A beautiful pearl is rare. They’re produced by oysters. In nature, a bit of sand slips inside the oyster’s shell. An elegant defense system coats the grain with a shiny substance as a barrier. Instead of diving down and prying open every oyster hoping for a jackpot, today most pearls are farmed. The oysters are still employed, but the sand is slipped in on purpose.

So pearls come from oysters, but the word is a little harder to trace.

The Old French was perle, and is first recorded in the 1200s. But the usual Latin was margarita, from the Greek margarites – the source of the classic Margaret. Theories abound, linking pearl to words for similar shapes. There’s the Old English pere, for pear and the Sicilian perna, or ham. We just don’t know for certain.

Nonetheless, we’ve been wearing the gems forever. The earliest record goes back to China, circa 2300 BC. Royals used to sew them into their clothing. They’ve been crushed up as cosmetics.

And, of course, it’s the birthstone for June, making this a logical choice for a summer baby.

The Pearl of Great Price is a New Testament parable. According to Matthew, Jesus compared the kingdom of heaven to the costliest pearl. This makes the name a subtle spiritual choice.

The name picks up a literary dimension thanks to:

There’s also Vermeer’s Girl with a Pearl Earring. The portrait inspired a 1999 novel by the same name, which became a 2003 movie starring Scarlett Johansson as Griet – the name the author gave to the girl. 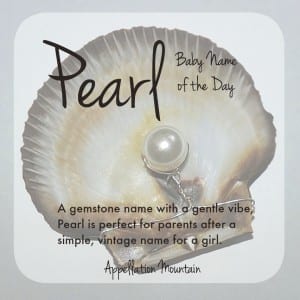 The name has acquired something of an edge in recent years. Pearl Jam emerged from Seattle’s grunge scene to become one of the most influential bands of the decade. And let’s not overlook Minnie Pearl, she of the Grand Ole Opry and Hee Haw fame. If the rock band lends Pearl an edge, the country comedienne gives the name a certain spunk.

Maya Rudolph and Jack Osborne both gave this name to their daughters. It was the middle name Busy Phillips chose for daughter Cricket, and Shonda Rhimes has an Emerson Pearl.

Not far behind is #664 – Perla, the Italian and Spanish version of the name.

Pearl is spare, sophisticated, and undeniably vintage, with layers of meaning. It’s a great option for parents looking for a fits-in/stands-out name for a girl.

What do you think of Pearl? Will this name continue to catch on?