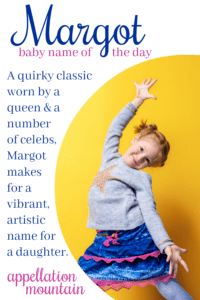 Margot peaked back in the 1930s, and seems poised to rise even higher today.

Our Baby Name of the Day comes from Asha, and also appears on this list.

Everybody knows Margaret. It comes from the Greek word margarites, meaning pearl. It became Margalit and Margarita, and eventually Marguerite in French.

Margot evolved as a short form of Marguerite.

Some say the nickname was invented for Marguerite of Valois, who married King Henry IV of France back in 1572. But the Dictionary of Medieval Names from European Sources records it in use at least a century prior to her 1553 birth.

What we know is that the queen popularized the nickname and ensured it entered the history books.

The French queen was stylish and highly educated. She authored her own memoirs – perhaps the very first work of its kind.

But she was also entangled in the controversies of her day. Her marriage was meant to cement a truce in the Wars of Religion. Instead, rumors and scandals plagued their relationship, and they often found each other on opposite sides.

Margueriten makes for a complex, intelligent, and capable figure, but we tend to remember her in a negative light. La Reine Margot, written by Alexandre Dumas, père, is the longest lasting of the many tales told about the queen, and it’s unflattering.

Despite that less-than-stellar historical reference, the name remained in use, in France and elsewhere.

Legendary English ballerina Dame Margot Fonteyn was born in 1919. She initially adopted the stage name Margaret, but the prima ballerina of the Royal Ballet is remembered to us by her birth name. She was wildly famous in the 1950s; and then Rudolf Nureyev defected from the Kirov Ballet. Despite a nearly twenty-year age gap, the pair danced together in Giselle in 1962, and became an even bigger international sensation.

And yet, Fonteyn doesn’t get credit for popularizing the name. Instead, it peaked in the 1930s, barely grazing the US Top 500.

Margot: T or no T

The silent T causes some consternation.

In French, it’s ordinary. Think of escargot or haricot. But in English? Not so much.

In 1950, Bette Davis starred as Margo in All About Eve; Grace Kelly played a character by the name in 1954’s thriller Dial M for Murder, only this time spelled with a t.

O-ending girl names can be found on the fringes over the years. Besides Margo, there’s also Cleo. But -ot ending names? This might be the only one.

Maybe it’s that distinctive spelling that makes the name feel quirky. It reads as creative and sophisticated, high-spirited and maybe a little edgy, while remaining traditionalish.

It’s the perfect choice for Gwyneth Paltrow’s character in The Royal Tenenbaums. All of the characters are accomplished, but eccentric.

When the 2001 movie came out, Margot was at the height of popularity in France, but hadn’t cracked the US rankings since the 1960s. There’s a tiny uptick in the name’s use around 2001/2002, but Tenenbaum wasn’t enough to take this one mainstream.

Other notable figures by the name include:

The name appears in Evelyn Waugh’s 1928 novel Decline and Fall; Nicole Kidman played the title character in 2007’s Margot at the Wedding.

Robbie might deserve credit for the name’s recent rise – and our tendency to use the -t spelling.

But here’s my best guess: the name owes its recent revival to the good ol’ 100-year rule.

In brief, it typically takes about a century for a name to peak in use, fall out of favor, and then be re-discovered anew.

The o-ending helps, as does the name’s nickname-proof style and vaguely French sensibility. It feels classic, but creative; traditional, but still daring.

It’s more popular than ever today, a stylish possibility for parents seeking a fresh and modern name with history galore.

Would you give this name to a daughter? What’s your favorite form of Margaret?