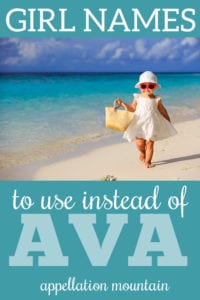 Ava appears in the US Top 1000 every year from 1880 – when the data begins – right through the 1970s. But despite the popularity of Hollywood icon Ava Gardner in the 1950s, the name remained under the radar until relatively recently. Now it’s become a Top Ten staple in the US, and shows no signs of slowing down.

Credit celebrities with boosting the name’s profile. Heather Locklear and Reese Witherspoon were just two high-profile parents who gave the name to their daughters in the late 1980s and 1990s. After Heather’s birth announcement, the name nearly doubled in use. Two years later, Reese chose the name and it entered the Top 200. More celebrities – and plenty of regular parents – followed.

It fits right in with our love of mini names, too – just ask the parents of Mia and Zoe.

What makes names like Ava? They’re short, but complete. They borrow some of Ava Gardner’s Hollywood glam. But they’re far less elaborate than many popular girl names, so they feel modern and brisk, too.

With roots in Persian and Germanic words, as well as ties to Hebrew and possibly Latin, Ava feels universal, and flexible enough to wear as a sweet child or a grown woman of accomplishment.

So we’re looking for short names that bring the shimmer, but still remain flexible. It’s an everygirl name, but one with plenty of sparkle and charm, and a certain resilience, too.

Ada seems like the most obvious substitute for Ava, doesn’t it? Both come in at just three letters and offer the attractive long ‘a’ sound. They’re also nickname-proof choices with multiple possible origins. But maybe Ada feels a tiny bit homespun, a sister for Hannah or Nora instead of Hollywood favorites like Ava and Harlow. Of course, Ada claims a pretty great namesake, too – Ada Lovelace, a nineteenth century mathematician considered the grandmother of computer programming.

Parents after something just a little different might consider Avalyn. Or Aveline, from the French word for hazelnut. But Avalon – the mythical paradise of Arthurian legend, a popular beach name in real life, and an iconic Roxy Music album – isn’t just a spin on Ava. It’s something completely different, a name both rare and recognizable. While the extra syllables make it less portable, it still feels like a wearable substitute.

Like Ava, Cleo regularly ranked in the US Top 1000 in the late nineteenth and early twentieth centuries. But while Ava reigns in the US Top Ten, Cleo just returned to the charts in 2019. Thanks to Cleopatra, the name feels mysterious, even exotic. That bright ‘o’ ending might help drive a resurgence in the name’s use, along with a handful of high-profile Cleos, both fictional and real. It also picks up on the very popular sounds of long-time Top 100 favorite Chloe.

In the late twentieth century, Echo came with a bunch of Bunnymen, an indie rock band with just enough of a following to make it familiar. But Echo belongs to myth, the name of a nymph who suffered from unrequited love. Today, it means “to repeat,” and also stands for the letter E in the phonetic alphabet. Parents have embraced o-ending choices and mythological ones, too. Echo might feel too different to substitute for Ava. But if you’re after something brief, complete, and unlikely to ever be shared, Echo seems like a possibility.

A name both classic and vivacious, Eliza hits the same sweet spot as Ava. We know the name has been around forever, but it feels particularly right for our moment. The most famous Hollywood Ava was a real actor; the most famous Hollywood Eliza might be the fictional Doolittle. Or maybe that title now belongs to Eliza Hamilton, who falls somewhere between the historical figure and the musical version we all know. Either way, Eliza fits with names like Ava – traditional without being too buttoned-up.

The Italian word for jewel, Gemma has a long history of sparing use. In the US, it’s caught on post-Emma … and might be seen as a substitute for that popular name, too. But Gemma shares Ava’s short and compact style, plus offers a distinctive sound. And a name that refers to all things sparkling naturally feels a little bit glam.

This name belongs to another screen legend, Greta Garbo. Born in Sweden, the actor came to the US to star in silent films in the 1920s, and made the leap to sound in the next decade. The screen legend earned a trio of Oscar nominations along the way. Originally short for Margaret, Greta stands on its own nicely. It feels simple and straightforward, but carries all the appeal of the luminous Miss Garbo, too.

Haven shares much of Ava’s sound. But Haven takes things in a different direction – tailored and perhaps slightly unisex. It’s a modern virtue name, rare in the past, but perfectly mainstream today.

Like Ada, Ivy makes a logical substitute for the popular name. Just three letters, but clearly not a nickname, Ivy has been used as a given name since at least the 1880s. It stands at its most popular today, though. Like any popular nature name, there’s something fresh about Ivy. There’s glamour here, too. Maybe it’s because of the many femme fatales called Poison Ivy, like Batman’s enduring enemy. Or maybe Ivy simply picks up on the sparkle of the holiday season, since it’s heavily associated with Christmas and wintertime.

Lake shares Ava’s crisp, clear sound. Unlike Ava, Lake is seldom heard as a girl’s given name. Actor Lake Bell has helped change that slightly. But I think it belongs with Ava for two reasons: first, that striking sound. Second, Veronica Lake was a 1940s screen icon, still widely recognized all these years later for her blonde, peek-a-boo style hair. That makes Lake more than just a nature name. It belongs in the same category as Hollywood surnames like Harlow and Winslet, too.

Like Ava, Lena shares an international assortment of possible origins. And yet there’s no question that this name works independently, too. It has appeared in the US Top 1000 every year, and ranked in the Top 100 through the 1910s. That leaves plenty of notable Lenas, like singer Horne, to inspire parents. Girls creator Lena Dunham is familiar to a younger generation. Today it is quite popular throughout much of Europe, too.

The name of a warrior queen from Irish legend, Maeve sounds sharpe and strong, but still feminine. It’s a logical successor to Ava, the kind of name that can’t be ignored. And while it’s rising in use quickly, thanks in part to Thandie Newton’s Westworld character, it remains far less common than Ava.

Margot seems vintage and modern at the same time – just like Ava. Like Greta, it owes its origins to the classic Margaret, though it also feels more like an independent name than a nickname. Margot sounds creative and fun, but also powerful and intelligent. It’s the kind of name that ages effortlessly. And while it continues to gain in use, it remains comfortably outside of the current US Top 100, making it a great alternative choice. The silent ‘t’ version is far more popular than the phonetic Margo, though that spelling also appears in the US Top 1000.

The Neva is a river in Russia, and Russian-born model and entrepreneur Natalia Vodianova named her only daughter Neva in 2006. But it’s no novel import. Instead, Neva appeared in the US Top 1000 from 1880 into the early 1960s. There’s a silent film star by the name Neva – born Genevieve Gerber – and plenty of other women, too. Other origins for the name are possible, too, lending Neva a certain globe-trotting style. It’s rare, but very wearable, with the same sharp ‘v’ of chart-topping Ava.

A long-time Appellation Mountain favorite, Sylvie’s success owes something to Sophie, and perhaps even more to Ava. V names, from Ava to Violet, are booming, and Sylvie’s 2017 debut in the US Top 1000 is yet more proof. Cousin to Sylvester and Silvia, Sylvie sounds slightly French, and thoroughly at-home on a modern American playground. The three-syllable Sylvia is also in steady use, but it’s Sylvie that feels so fashionable today.

Maybe Stella isn’t uncommon enough to satisfy every parent. But it does shift slightly farther up the popularity list, without sacrificing style. Stella’s meaning – star – combined with the name’s Hollywood associations make this name effortlessly cool and very wearable. Bella is pretty and Ella is enchanted, while Stella shines.

In Russian, Vera means “faith.” But it resembles the Latin verus – truth. That makes Vera a serious virtue name, but a subtle one. Vera has all the hallmarks of names like Ava. It’s short and complete, with that sharp, sophisticated ‘v.’ And while Vera might strike some as too vintage, this name peaked back around 1900 – making it ready for revival after a long hibernation. It substitutes beautifully for Ava, and so many other two-syllable, ends-with-a names.

As brief and sparkling as Ava, Vita can come from the Latin word for life, or it might be short for Victoria. The latter explains how English author Vita Sackville-West got her name. While it’s far less known than Ava, Vita seems like the same kind of nicely portable, vintage-but-modern choice.

Longer like Avalon, but closer to Ava in terms of popularity, Vivian could be a logical substitute for Ava. After all, it’s got that great V sound. And Vivien Leigh puts this name in the same Hollywood icon category as Ava Gardner. Vivian’s bright sound is matched by the name’s meaning: life.

Zara sounds like Sarah-with-a-Z, and perhaps some parents arrive at Zara that way. Voltaire probably borrowed it from Arabic for his 1732 drama. And when Princess Anne chose the name for her daughter, Zara Anne Elizabeth, in 1981, saying that it meant “bright as the dawn.” There’s history galore to this short name. The Z is every bit as big a sound as Ava’s V, making for a memorable name choice.

That wraps up this list of names like Ava – plenty of possibilities that share the same qualities that pushed mini name Ava to the top of the charts.

What would you suggest to parents eager to choose a similar name that’s not nearly as popular?

Thanks to Emma, Katinka, and Onomastodon for their suggestions to add to the list! 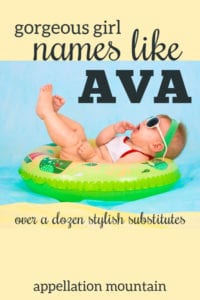 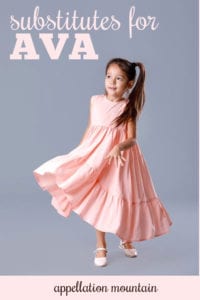