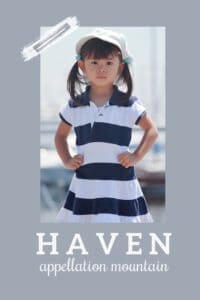 The baby name Haven combines a stylish sound with an appealing meaning.

Haven comes from the Old English word for a port, possibly related to our word have. (Because a port holds – or “has” ships.) Another theory connects haven to an old word meaning sea.

Today, though, it signals just one thing: refuge. Protection. Safety.

A place can be a haven for far more than boats, and not all havens are physical. It’s sometimes a feeling, too – “this cottage by the sea feels like a haven from real world worries.” It’s often used in combination: safe haven.

If your ancestors lived near a physical haven, then you might answer to the surname. As with any last name, a few individuals – mostly men – received Haven as a first name over the years.

While the baby name Haven has some history of use, it’s only become a mainstream possibility during the twenty-first century.

After all, this is the age of noun names steeped with meaning. Genesis and Journey, Trinity and Harmony.

The growing popularity of the name Haven speaks to other trends, too:

No surprise, then, that the baby name Haven started to rise in use during the 1990s.

By 1996, those numbers were 206 girls and 37 boys. That’s enough to put Haven in the US Social Security Administration’s Top 1000 baby girl names list.

But then along came a celebrity birth announcement, and parents took notice.

Not every celebrity baby name proves influential – most don’t! But the Alba-Warren kids are more visible than many, partly because Jessica’s company is family-focused, with lots of baby and kid-care products. The kids regularly appear on her Instagram, keeping their names visible to a wider audience.

As for how the couple chose the baby name Haven for their second daughter?

The story they tell explains her name perfectly. Haven was born in caul – delivered while still inside her amniotic sac.

Legend tells that Napoleon and Charlemagne share the same rare birth story, so perhaps Haven is destined for greatness.

TikTok and other social media platforms are making a younger generation of Havens prominent, too.

But if we go backwards in time, there’s Haven Gillespie.

Born James Lamont Gillespie, you know his work if not his name. His most enduring composition? He’s co-author of “Santa Claus is Coming to Town.”

Speaking of male bearers of the name, football player Haven Moses played wide receiver in the 1960s and 70s.

More proof that the baby name Haven works well for a baby boy, as well as a girl.

The baby name Haven is richly meaningful, and it works on multiple levels.

It satisfies Christian parents, after something symbolizing shelter and care. And, of course, it’s far less obvious than naming your child Heaven.

But Haven suggests a universally appealing quality, one that works outside of a faith context, too.

Frills-free and stylish for a daughter, meaningful and current for a son, it’s easy to see why Haven has become a twenty-first century staple.

Would you consider the baby name Haven? 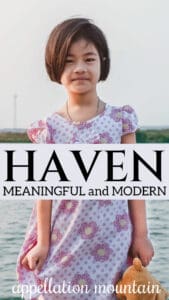 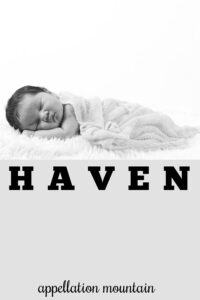