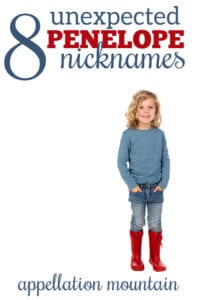 Unexpected Penelope nicknames meet a need. After all, over 6,000 girls were named Penelope last year alone, and nearly 20,000 in the last three years.

That’s a lot of little girls sharing the same name!

It marries the long and lovely sounds of favorites like Isabella and Olivia. Plus, Zoe and Chloe paved the way for interesting e-ending options.

Plenty of Penelopes answer to their full name, no nickname required.

Penny is the default, a sweetly vintage choice. There’s The Beatles’ “Penny Lane” and The Rescuers’ little girl Penny. But Penny isn’t for everyone – and definitely isn’t the only option.

Read on for eight unexpected nicknames for Penelope!

There’s a definite ‘lo’ sound in Penelope. Lola is traditionally associated with Dolores, a name out of favor today.  Lola can stand on its own, and ranked a respectable #260 in 2021.  But if you’re after a formal name, Penelope is a stylish possibility with the right sound. A similar option that’s even more obscure is Pola, as in Polish-born silent film star Pola Negri.

Traditionally associated with Eleanor and Helen, Nell works for Penelope, too. The ‘nel’ is right there in Penelope, transforming a long, extravagant name to a spare, simple one.

Poppy has been huge in the UK, and climbing in the US, too. With the strong repeating ‘p’ sound, Poppy makes sense as an affectionate form of Penelope.

Another possibility thanks to the repeating ‘p’ sound, and also bigger in the UK than the US. If Philippa seems too obscure, Penelope might be another route to sparky Pippa. Pippi – as in children’s storybook character Longstocking – could be another sweet short form.

Between Iron Man and Annie, there have been plenty of prominent characters called Pepper. But like Cricket and Bootsy, Pepper doesn’t feel strongly connected to any single given name. Instead, Pepper is the feminine equivalent of Buddy or Junior.  But if Pippa and Poppy are possible short forms of Penelope, it stands to reason that Pepper would work, too.

At one point, naming your daughter Mary and calling her Molly was perfectly acceptable. Likewise, many a Mary became Polly. That feels a little odd today. Instead, Polly sounds more like a potential nickname for Penelope.

Sweet, botanical Posy; quiet, literary Posy. This one is usually connected to Josephine, but traditional pairings are less well known in our who-needs-a-formal-name age. Posy could easily link to Penelope.  It’s a stretch sound-wise, but then again, Posy for Josephine isn’t obvious, either.

Yes, there are a handful of women really named Pixie.  And Pixie could be a nickname for nearly any name – see actress Pixie Lott, born Victoria.  But that letter P means that Pixie works particularly well for Penelope.

What is your favorite Penelope nickname? 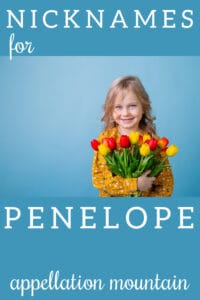 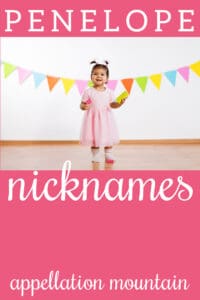