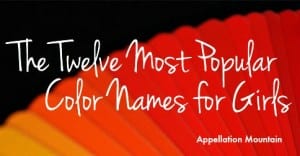 Who doesn’t love color? And color names are big in the twenty-first century.

While several have cracked the US Top 100, there are as many possible color names for children as there are colors in the rainbow!

It turns out that it’s surprisingly difficult to determine precisely what qualifies as a color name. Do Sky and Skye count? Jade is obviously in, but what about Jada? And Roses come in dozens of hues, but rose is also a shade of pink. Does that still count?

Amber’s heyday was back in the 1980s, after a sensational 1944 bestselling novel called Forever Amber catapulted this from obscure semiprecious substance to favorite name.

While Amber is often used in jewelry, it isn’t a stone. Instead, it’s fossilized tree resin. That doesn’t sound especially pretty, but with colors ranging from golden-brown to orange to yellow, it actually is quite lovely.

Looking for a fresher alternative to Amber? Fiery Ember is a fast-rising alternative.

Olivia isn’t exactly a color name, but edible Olive is a shade of green.

Olive is also a favorite with celebrity parents like Isla Fisher and Drew Barrymore.

More tailored than long-time Top Ten favorite Olivia, it’s a name that feels tied to the natural world, and nicely wearable. Olive ranked a respectable #282 in 2014. Hard to believe that back in 2006, the name didn’t even rank in the US Top 1000.

Beyonce named her baby Blue, but it’s Skye and Sky that most parents favor. Yes, they’re nature names – but the phrase “sky blue” is so familiar, I think this counts as a color name.

Combined, the two blue-hued names rank #10 on the most popular color names for girls list. In the overall rankings, Skye charted at #368 in 2014, with Sky at #736 and rising fast. That’s not counting Skylar, Skyler, and Skyla, all of which share the same distinctive sound.

Iris doesn’t scream color name to me. Instead, I think of it as a vintage, botanical, and literary choice. But colorful it is! In Roman mythology, Iris was the goddess of the rainbow. And as a color, iris usually refers to a blue-violet shade. For our purposes, I’m grouping Iris with Violet, both names in the purple family.

Looking for an alternative to Iris? Harry Potter name Lavender is a similar color – and far more rare as a given name.

Sage is also another word for wisdom, which makes this a virtue name, and an herb – meaning that it’s an edible name, too.

In 2014, Sage stood at #388 and rising, while Paige-with-an-S spelling Saige came in at #604 – and is also climbing fast. Together, they’re the eighth most popular color name for girls in the US.

The Italian city is Siena, but the preferred spelling in English takes a double ‘n’ – Sienna.

It’s familiar as a reddish-brown color in the box of Crayola crayons. Long before that, sienna was a pigment produced in the city of Siena during the Renaissance, and widely used in artwork from that time forward. (And actually before then, too – cave paintings used the same pigment.)

Red, white, yellow, pink, even shades of lavender, copper, and gold – there are so many colors of roses. But the color associated with rose is always pink. Tea rose is a paler, more delicate color. Rose pink and French rose are brighter, the colors of pink associated with little girl’s backpacks.

Of course, Rose is also a classic and enduring name for a girl, very different from newcomers like Sienna and Skye. So classic, in fact, that it’s almost possible to overlook Rose as a color name. Scarlett Johansson chose the name for her daughter, keeping color names in the family. 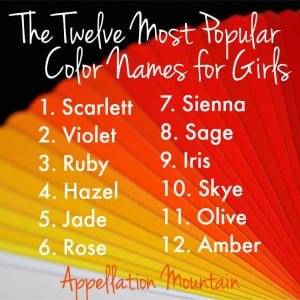 lete, colorful Jade manages to be both girl-next-door and exotic import at once.

A popular name since musician Mick Jagger named his daughter Jade in 1971, it’s borrowed from an ornamental rock long valued in China, India, Korea, Taiwan, and elsewhere in Asia. Jade is almost always green, though it comes in many shades.

While Jade may hail from the other side of the earth, Jade’s sound is only a little different from everygirl names like Jane and Kate.

Celebrity chef Giada DeLaurentiis gave the name to her daughter. Giada is the Italian form of Jade.

Jade has faded in recent years, but remains #139 in the US, and the fifth most popular color name for girls.

Hazel is a gentle nature name, and a celebrity favorite. Julia Roberts has a Hazel. So do Emily Blunt and John Krasinski. Fictional characters have worn the name from Watership Down – where Hazel is a (male) rabbit to Emma Frost’s mother in the X-Men comics.

As colors go, hazel is somewhere between green and brown. Hazelnuts have brown shells, but hazel eyes can be light brown, gold-flecked, or almost green.

Hazel ranked #107 in the US in 2014, a fast-rising vintage name, and the fourth more popular color name for girls.

Hazel and Olive are gentle color names, but Ruby? Ruby is bold. Like Jade, this name comes from a gemstone and has a strong, unambiguous sound.

Rubies are the birthstone associated with July, and, along with sapphires, emeralds, and diamonds, are among the most precious of gemstones.

The word comes from the Latin word for red – ruber – and “ruby red” is instantly recognizable as a deep, blood red color. It brings to mind lipstick colors and the soles of Christian Louboutin shoes.

For years, Violet was the quirky character in a Roald Dahl novel. Tori Spelling played Violet Ann Bickerstaff, Screech’s shy, awkward girlfriend in Saved By the Bell. And Violet Parr was the equally timid daughter in The Incredibles, whose power was – appropriately enough – the ability to become invisible. The term “shrinking violet” can refer to a shy person.

But now Violet feels vibrant, the name chosen by Jennifer Garner and Ben Affleck for their eldest daughter, as well as the name of the marvelous Maggie Smith’s quick-tongued character on Downton Abbey.

Whatever the reason, Violet has risen to become the #67 name for girls in the US as of 2014, and the second most popular color name for girls.

Hard to remember, but in Margaret Mitchell’s Gone With the Wind, the heroine’s full name was Katie Scarlett O’Hara, named after her grandmother. Scarlett was a surname, originally given to someone who dyed wool for a living.

Scarlett was slowly catching on in the late 1990s. Then along came a young Scarlett Johansson, and her breakout role in 2003’s Lost in Translation. Scarlett jumped to #760. By 2009, it ranked in the US Top 200. As of 2014, it was the 30th most popular name for girls in the US, and by far the most popular of the color names for girls.

Red comes first, thanks to Scarlett and Ruby. More than 10,000 girls were given one of those two names in 2014.

Next up is purple, thanks to the combined popularity of Violet and Iris.

Almost 7,000 girls received a brown name – Amber, Hazel, or Sienna/Siena. But had I counted Hazel with the green names, green would have moved into third place. Instead, I’ve counted just Olive, Jade, and Sage/Saige, totaling around 5,700 girls, and putting green names in fourth place.

What are your favorite color names? Would you use one of these dozen? Are there other names that should have been on this list? What are the boldest color names you’ve ever considered?