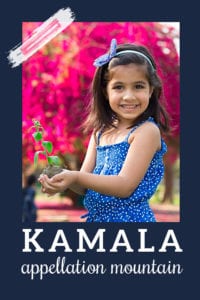 Could the baby name Kamala become one of the hottest picks for the coming year?

The historic election of Kamala Harris as Vice President of the United States inspired this post.

Maybe it’s not immediately obvious to English speakers, but it is easy to spell and pronounce – particularly after the California politician has spent so much time in the headlines.

Mispronunciations of her name even sparked the Twitter hashtag #MyNameIs. It shines a light on respect for names from all cultures.

But where does her distinctive name come from?

Harris is the daughter of immigrants. Her mother came from India to complete graduate studies at UC Berkeley; her father came from British Jamaica to do the same. The couple met, married, and raised daughters Kamala and Maya in northern California.

She’s both the first South Asian American to serve in the US Senate and the second African American woman to do so. A lawyer by training, she started her career as the district attorney of San Francisco before seeking state-wide office.

In her biography, Harris explains that Kamala means “lotus flower,” a significant symbol in Indian culture. She writes:

… a lotus grows underwater, its flower rising above the surface while its roots are planted firmly in the river bottom.

It’s a powerful image, but there’s even more to this name.

Nearly any flower is likely to carry multiple meanings, and the lotus is no exception.

It’s particularly significant in Buddhism. It rises out of the muddy water, suggesting reaching for enlightenment. But it also conveys purity and faithfulness.

Lotuses are also known as the flower of life, and different colors can convey different messages.

Besides lotus, the baby name Kamala conveys other meanings.

It means perfection in Arabic.

And it’s another name for Lakshmi, Hindu goddess of love, beauty, and good fortune. She’s often depicted holding lotus flowers and gold coins. But the fortune she brings goes beyond material abundance. The goddess offers spiritual well-being, too.

It’s easy to imagine parents seeking a crossover name choosing Kamala. In the 1950s and 60s, Pamela enjoyed peak popularity, reaching the Top 20 in the US.

Way back in the year 1900, British author Thomas Anstey Guthrie penned a story called The Brass Bottle. It’s the original version of a story we’ve heard countless times since. Man finds antique bottle, releases genie, and has his every wish granted – to unexpected, and often calamitous – results.

Adaptations of the story followed, first on stage, and eventually on screen.

At some point, a female genie appears – possibly in Guthrie’s original, or maybe in a later version. When the 1964 version of the movie was made, the genie – Tezra – was played by Bombay-born actor Kamala Devi.

Devi went on to appear in The Man from UNCLE and other television series in the era.

It seems likely that the Harris family heard the name thanks to the actor. After all, the senator’s full name is Kamala Devi.

As for The Brass Bottle, it co-starred Barbara Eden as a mortal. She went on to play the supernatural Jeannie in hit 1960s genie-in-a-bottle sitcom I Dream of Jeannie, loosely based on the movie.

The Brass Bottle seems to have aged poorly – even if we’re still borrowing the concept of careful-what-you-wish-for.

But here’s another reason the baby name Kamala could catch on: the Marvel universe.

Then she discovers she’s actually a shapeshifter.

Since 2014, Ms Marvel has starred in her own, Hugo Award-winning series. It’s now headed to Disney+ as a series starring Iman Vellani. Kamala Khan is smart, principled, and, yes, heroic. It’s easy to imagine parents could be inspired to consider the name accordingly.

And for one more fan favorite tie-in: there’s a Kamala in an episode of Star Trek: The Next Generation, a brief love interest for Captain Picard.

With the exception of the 1960s spike driven by the actor Kamala Devi, this name remains rare.

But with history being made, the politician – or the superhero – might inspire some parents to consider this appealing, richly meaningful name for their daughters.

Would you consider the baby name Kamala?