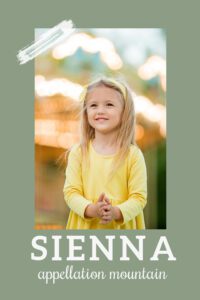 The Italian city is spelled with just one N: Siena.

Located in Tuscany, it’s been settled since sometime between 900 and 400 BC. That means the Etruscans got there first.

The Romans referred to the city as Saena Julia by the year 70.

Theories about the name Siena about, including:

While the city remained small and sleepy under the Romans, it flourished in the Middle Ages. Siena became a center for banking and trade, as well as the arts.

A reddish-brown pigment comes from this part of Tuscany.  Originally called terra rossa – red earth – it eventually became known as terra di Siena – earth of Siena.  It was used from ancient times through the Renaissance and beyond.

The word appears in English by the 1700s, spelled with a double N.

Born in 1347, the future Saint Catherine of Siena witnessed both the height of the city’s prosperity, and the devastation of the plague. Devoutly religious from a young age, Catherine refused to marry. Instead, she joined the Third Order of Saint Dominic.

Catherine became involved in politics, traveled widely, worked for religious reform, and wrote prolifically – all at a time when such pursuits were rarely open to women.

She’s considered a patron saint of Italy and a doctor of the church.

It’s not clear exactly how the baby name Sienna went from the map and the artist’s palette to the nursery.

One theory comes from British Baby Names. Families sometimes named their children for foreign cities in which they were born. Think of Florence Nightingale and her sister Parthenope. Their parents took inspiration from Italian cities they visited on their three-year tour of the country.

Given Siena’s popularity as a destination, no question that many a European tour included a stop in the city.

Regardless of the reason, the baby name Sienna might have risen in use in the UK first.

One possible inspiration? That year, a short-lived love interest for Seinfeld’s George was named Siena. It might’ve been enough to explain the bump in the name’s usage.

Or maybe it was just our love of Italian names. After all, the 1990s were the age of Francesca and Angelica and Claudia, romantic choices with Italian roots. Place names, like Savannah, and color names, like Scarlett, were rising in use, too.

But a pair of English actors really put the baby name Sienna on parents’ radar.

There’s Sienna Guillory, an English actor with a long list of credits, particularly on television.

And then there’s Sienna Miller.

In 2004, the model-turned-actor co-starred with Jude Law in the remake of Alfie.

They became a real-life couple, too, and were married at Christmastime.

The name might’ve continued to climb. Plenty of high profile parents chose the name for their children. And fictional characters answered to Sienna, too, on popular shows like Hannah Montana.

But Miller stepped out of the spotlight in 2009. When she returned a few years later, Miller took on grittier, more serious roles. While she’s won critical acclaim, the work is just slightly under-the-radar.

A NOTE ABOUT THE TOYOTA

Along the way, Toyota introduced a minivan called the Sienna.

It’s been in production since 1998, so parents would’ve well-aware of the name’s use by a car company when they welcomed their daughters.

While Sienna Miller helped put her given name on parents’ lists, the baby name Sienna has since succeeded on its own merits.

Part of it comes down to sound: Sienna fits with liquid names, the Arias and Elenas so in favor now.

And while it’s not popular – or even really used as a given name – in Italy, the baby name Sienna is a favorite across the English-speaking world.

That makes it a logical crossover choice for families who wish to acknowledge their Italian heritage. One high profile use? Princess Beatrice, granddaughter of Queen Elizabeth II, and her Italian husband, Edoardo Mapelli Mozzi, named their daughter Sienna Elizabeth in 2021.

Romantic and stylish, Sienna has quickly gone from Hollywood sensation to modern staple for our daughters.

What do you think of the baby name Sienna? 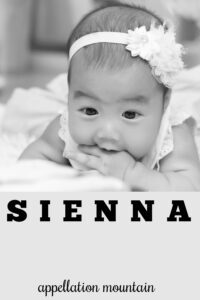