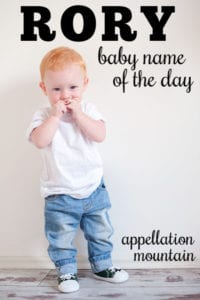 Legendary High King of Ireland, Ruaidrí Ua Conchobair, claims this name first in the history books. His given name traces back to ruadh – red. It’s the kind of historical link that lends a name strength.

There’s also Rory O’Moore, the well-born leader of the Irish Rebellion of 1641, standing up to the powerful King Charles I of England with little more than guts and determination on his side. A bridge in Dublin bears his name.

All of this makes the name read distinctively Irish.

It reached a high of #280 in 1959. Credit Rory Calhoun. Born Francis, he left behind a record as a juvenile delinquent to become a Hollywood heartthrob in the 1940s and 50s. He played a lot of cowboys. His screen name was chosen not for its royal roots, but because it sounded like a lion’s roar.

Calhoun’s popularity likely explains the name’s spike in use.

Did he help popularize Rory for girls, too? Maybe. He gave the name to a daughter in 1971. But Calhoun was late to the party. An even bigger Hollywood star, Errol Flynn, chose the name for his daughter in 1947. That marks the first time we start seeing the name chart, in small numbers, for girls. Another spike came in 1969, after the late Bobby Kennedy’s youngest daughter, Rory Elizabeth Katherine Kennedy, was born following his assassination.

Overall, though, Rory belongs to the boys.

All those famous figures aside, the name remained relatively unknown into the 1990s. Until Amy Sherman-Palladino developed Gilmore Girls. It debuted in October 2000. The mother-daughter duo at the heart of the series are both named Lorelai, but the younger of the two answers to Rory.

It’s not just her name, either; there’s more than one mention of how Lorelai chose to name her daughter in the first season.

The show is a treasure trove for name enthusiasts. But it did it influence parents?

No question. Check out the numbers:

In the years since the show left the air, the name climbed for boys and girls alike. That’s true even during recent years, with the Netflix reboot of Gilmore Girls: A Year in the Life taking us all back to Stars Hollow.

Today, perhaps the best comparison is Ryan. It’s the kind of name that we sometimes hear for girls, but it remains masculine.

With a famous king and a world-class athlete among the many bearers of the name, this feels like a handsome name with plenty of swagger, but still rich with traditional roots. It’s a cheerful, thoroughly likable name.

What do you think of Rory? Do you like it better for a boy or a girl?

This post was originally published on October 28, 2009. It was revised substantially and re-published on November 20, 2019.