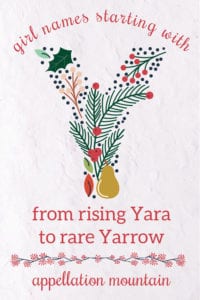 Girl names starting with Y tend towards the obscure.

After all, Y ranks 23rd out of 26 in terms of most popular first initials. Only X, Q, and U are less popular.

Another factor? Lots of Y names aren’t exactly Y names at all. The letter easily stands in for I – see Ysabel and Ygraine.

It swaps out with J, too, especially in Latin America. Several names appear to have a Spanish origin, but dig a little deeper and they’re actually Arabic, Hebrew, or something else entirely.

Slavic imports sometimes add a Y in front of an E, like Yelena.

In some ways, girl names starting with Y fade into the background a little, just as the sound itself often disappears.

An import from Latin America, Yaretzi is part of a cluster of names, all related to Yara.

Actor Yara Shahidi helped put her lovely name on parents’ radar. Yara claims at least three distinct origins and meanings. It could be an Arabic name meaning friend; a Brazilian mermaid-like creature; or a Hebrew name meaning honeysuckle. It’s sometimes considered a butterfly name, and if all of that wasn’t enough? There’s even a Yara on Game of Thrones.

American parents love Jasmine for our girls; Yasmin is Arabic, and often pronounced with the emphasis on the second syllable: yas MEEN. Spellings Yasmine and Yasmeen are also in use, but less common in the US.

We recognize Jamila as a name with Arabic origins. It means beautiful. In Spanish, Jamila becomes Yamila and then Yamilet or Yamileth.

The second spelling might make the pronunciation more obvious. It’s ya EHL, rather than Yale. The Old Testament name means ibex in Hebrew.

Another example of J becoming Y, Yahaira comes from Jair, a name with Hebrew origins. It means “he shines.” The Old Testament name is typically pronounced with two syllables, and sometimes respelled with a Y. So Jair becomes ya-air, and picks up an A to become feminine, making Yahaira a Spanish phonetic version.

In Slavic languages, Jana – a feminine form of John – becomes Yana. Or even Yanina.

The Hebrew form of Jordan, Yarden rhymes with garden.

A place name and surname, Yardley might be among the rarest of the -ley names.

A gentle nature name possibility, Yarrow is occasionally heard as a surname, and even more rarely as a first. But it fits right in with Willow and Sage, an English herb name.

A feminine elaboration of Yasmin.

A nature name originally borrowed from a South American tree, Yesenia was launched by a 1970s telenovela and a related 1971 movie. While the movie was Mexican, it became an international blockbuster. A 1987 television reboot followed.

A Slavic form of Eve.

Another Game of Thrones names, a little bit Ygraine with a dose of Scarlett.

Spanish and Portuguese forms of Agnes, we typically see these names spelled with an I – Inez and Ines.

To an American audience, Yoko feels like a one-person name. John Lennon’s parter, Yoko Ono, answered to a traditional Japanese origin name. Based on the kanji used to write her name, it means ocean child.

Likely derived from the Latin word for the violet flower – viola – Yolanda (along with Jolanta and Iolanta) has appeared in European royal families over the ages. It’s also one of the most successful girl names starting with Y in the US. During the 1960s and 70s, it briefly dipped into the Top 100.

Yet another Yolanda cousin.

Isabeau often comes up as an alternative to Isabelle, though the two names are related. Fans of A Discovery of Witches might recognize this spelling as the name of Matthew’s aristocratic and immortal mother.

Neil Gaiman gave this sharp, pretty name to his fallen star come to life in Stardust. It’s probably a feminine form of Owain and Ywain, a name worn by one of the Knights of the Round Table.

Along with Ysabelle and Ysabella, one of the many cases where the letter I and the letter Y can be used interchangeably.

A French feminine form of Yves, Yvette peaked just outside the US Top 100 in the 1960s.

Another spin on Yves, Yvonne might be one of the most familiar girl names starting with Y. A midcentury favorite, it reached the US Top 100 in the 1930s.

What are your favorite girl names starting with Y? What would you add to the list? 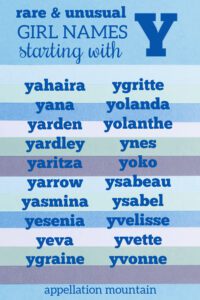 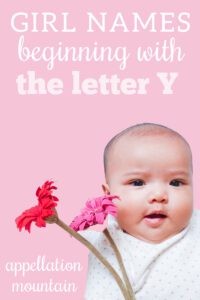