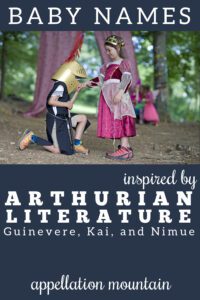 Names from Arthurian legend range from mainstream favorites to the truly obscure. But even some of the lesser-known possibilities could wear well for a child born today.

And why shouldn’t they? Tales of King Arthur and his Knights of the Round Table have captivated us for generations. And not just in the distant past, either. The stories of King Arthur’s rise to power, the forbidden love between Lancelot and Guinevere, and all the rest have been well-told tales since at least the 1100s, and probably earlier.

Some re-tellings are more romantic. Others adventurous. Magic features in nearly all of them, at least a little.

Names from Arthurian legend have long histories. They’ve evolved across languages and time. Some of the names on this list come right from the text, their Old English roots evident. Others are more of a stretch, re-invented as they were translated into new languages and adapted for movies and other productions.

Geoffrey of Monmouth’s Historia Regum Britanniae tells Arthur’s story as early as 1138, though at least some of it was borrowed from existing folklore. He gives us Excalibur and Avalon, as well as Arthur’s final defeat by Mordred.

The poet Tennyson added “The Lady of Shalott” and Idylls of the King in the 1800s.

Twenty-first century parents might think of the musical Camelot, or maybe Monty Python and the Holy Grail. But more recently, BBC One’s Merlin and Netflix’s Cursed have told the story from different perspectives.

If you’re after something just a little bit off the mainstream, but still rich with history, consider names from Arthurian legend.

The name appears in a German compilation of Arthurian tales.

Looking for a Welsh heritage choice? It translates to “more love.” In a collection of Welsh tales, including Arthurian lore, Angharad features in – what else? – a love story.

In Arthurian legend, Avalon was a place, not a person – their equivalent of paradise. Today Avalon reads like a mash-up of Ava and Allison, and thoroughly wearable.

Blanchefleur means “white flower.” In the most frequently-told tale, she’s the wife of Percival. Is this name too much for a modern child? Maybe. It could be marvelous in the middle spot …

Before there was Romeo and Juliet, there was Tristan and Isolde. Bragnae is Isolde’s maid in the ages-old tragic tale. Early days, the doomed romance was probably unrelated to the Arthurian tales, but over time, the story was expanded to make Tristan a Knight of the Round Table.

A sister for Gavin in some tales.

Tennyson’s “Lady of Shallot” answered to Elaine. At least four other Elaines appear among Arthurian baby names, including the Grail Maiden, daughter of the Fisher King. A French form of Helen, the name was a favorite in the US during the 1940s.

A handmaiden to the Lady of the Lake, and a love interest for Gareth, Eluned is renamed many times over the years. In English, Eluned often becomes Lunet, Lunete, Linnet or even Lynette.

The first is mother to Tristan; the second name belongs to a cousin and confidante to Guinevere. Both look quite a bit like Elizabeth and Isabel. While the Dictionary of Medieval Names from European Sources doesn’t list these as variants, it seems like a possible source.

The character Enid is a brave and loyal wife, to either Geraint or Erec, depending on the version of the story.

From an Old French poem associated with tales of King Arthur. It’s probably cousin to Esme.

Aunt to Lancelot, and bearer of a name that seems exactly on trend in our age of Evelyn and Everly.

This storied queen needs no introduction. If Genevieve can catch on, why not Guinevere? Former chart-topping favorite Jennifer is a Cornish version of the name.

Mother to King Arthur. It’s Ygraine in the BBC’s Merlin.

She was Juliet before Shakespeare’s story came along. Also spelled Iseult, this name seems accessible in our Age of Isabella.

Another alternative name for Eluned, and a nod to the ever-so-popular Luna.

Morgan le Fay was a sorceress, usually considered a half-sister to King Arthur, and sometimes at odds with her half-brother. She’s also called Morgaine and Morgana, but most accounts list her as Morgan. Odds are that Geoffrey of Monmouth intended the name to mean “born of the sea.”

Another Mor- name, this one associated with King Arthur’s half-sister.

A princess or possibly an enchantress, sometimes appearing in tales of King Arthur, particularly in Italy.

From the Latin vivus – alive. Vivian is another name often connected with the Lady of the Lake. She’s a benevolent figure, rescuing the orphaned Lancelot and helping Arthur claim the sword Excalibur. She’s also called Viviane, Niniane, Nimue, occasionally Elaine and Evienne.

Yvain is a knight. There’s no Yvaine recorded in the Middle Ages. But Neil Gaiman gave this name to a girl in Stardust. It became a movie in 2007, with Claire Danes cast as the fallen star-turned-girl. And if Evaine is a feminine name in some Arthurian tales, why not Yvaine?

One of King Arthur’s nephews.

Another name for Merlin.

Cousin to Tristan in the Tristan and Isolde story.

The king himself, and a classic name newly fashionable.

Medieval tellings give these names to the brothers Savage. Today, of course, they just look like alternate spellings of the same name. Sir Balin, it is said, killed the Fisher King, the guardian of the grail.

Another Knight of the Round Table, Caradoc’s name is Welsh in origin.

More than one figure answered to these names, and unlike many of the names on this list, there’s historical evidence for their existence. Constans was the oldest son of the Western Roman Emperor, Constantine, in the early 400s. Constans briefly served as a co-emperor. Legend has it that Constantine was father of Uther Pendragon, and thus, grandfather to Arthur.

Originally a surname for a dark-haired person, Corbin comes from the French corbeau – raven. Corbenic is a place name in Arthurian legend. The castle at Corbenic is home to the Fisher King as well as the birthplace of Sir Galahad. There are lots of theories as to the place name’s origins, but if you’re after a subtle tie to Arthurian tales, this is it.

The name is almost always spelled Erec. And there may be no connection between the Round Table Knight and the Old Norse name Eric. But Chretien de Troyes told of the knight’s adventures and his romance with fair Enide, so he definitely merits a seat at the Round Table.

Not one, but two, Escanors appear in various tales. ely

Sir Thomas Malory mentions a knight named Fergus in Le Morte d’Arthur. Like Constantine, there was a real person by the name – Fergus of Galloway was a powerful Scottish leader in the 1100s. Malory wrote three centuries later, but he based his stories of Fergus on the Roman de Fergus from the 1200s.

The wounded guardian of the Holy Grail, The Fisher King is sometimes given a name. But Fisher might make an interesting choice, an allusion to the legend, as well as the many artistic works that have been inspired by the story. Today, few might link it to names from Arthurian legend. Instead, Fisher might seem more like a Christian reference to evangelization – “to be fishers of men.”

A dashing name, Sir Galahad was among the better known Knights of the Round Table. It may come from Biblical place name Gilead. In the stories, Galahad is the son of Lancelot and Guinevere, and he’s the one who succeeds in finding the Grail.

Centuries before Ricky Gervais brought The Office to the small screen, Gareth was a brave knight, and the beloved of Eluned.

It’s tempting to list Gawain with names from Arthurian legend. But while Sir Gawain’s encounters with the Green Knight are well-known, this name is nearly always updated to Gavin. It might come from the older Welsh name Gwalchmai, meaning hawk.

Equally modern and medieval, Kai owes its current popularity to the Hawaiian word meaning sea. But Sir Kay – or Cai in Welsh and Caius in Latin – was one of the very first Knights of the Round Table. That puts Kai on the list of Arthurian baby names.

Even if you’ve never seen a single movie or read a line of text, Lancelot is probably familiar. He’s Arthur’s best friend, a trusted companion. But then he falls for Arthur’s beloved Guinevere, and well … that’s the end of Camelot. But it isn’t the last of the knight’s adventures, as he goes on the quest for the Holy Grail.

A cousin to Lancelot, and the hero of a folk ballad.

The son of a Duke, and an early ally to Arthur. Despite many Luke names succeeding in the US right now, this one is rare.

Another Luke name, this one given to an enemy of King Arthur.

Uncle to Tristan. His marriage to Isolde is at the heart of the doomed love story.

A wizard and a wise man, Merlin is Obi-Wan Kenobi to Arthur’s Luke Skywalker, a mentor with vast, otherworldly powers. Geoffrey of Monmouth probably borrowed existing Welsh legend, as well as historical figures, to create his composite Merlinus Ambrosius. Today, Merlin’s reputation rivals that of Arthur – particularly following the successful BBC series Merlin, featuring a young version of the wizard. The character pops up everywhere, from Disney’s animated series Sofia the First to Legends of Tomorrow, where Merlin is a DC Comics superhero.

King of the Faeries, sometimes considered a son of Morgan le Fay.

A modern favorite, Welsh Owen reads as Owain in names from Arthurian legend. It’s also sometimes Ywain, Yvain, or even Ivan. In the stories, he’s one of the Knights of the Round Table. It’s possible Owain was based on a historical figure, as the name was fairly common.

The name of the one of the Grail Keepers.

It literally means “head of the dragon.” In many tellings, it’s the surname of King Arthur himself, inherited from his father, Uther.

Sometimes spelled Perceval, today this name sounds elaborate, even fussy. But Percival was one of the few knights to survive Arthur’s death. Some stories make him a commoner who rose through the ranks. In other versions, he’s of noble birth but raised in seclusion by a widowed mother. Either way, Percival earns his knighthood. The story of his quest to find the Holy Grail is among the best known.

The first Welsh poet named in history, Taliesin was part of King Arthur’s court. There’s a real sixth-century poet by the name. It’s also famous as the name architect Frank Lloyd Wright chose for one of his homes.

Tristan’s tragic love story with Isolde wasn’t originally part of the Arthurian canon, but over the years they were patched together, and Tristan was promoted to Knight of the Round Table.

Are there any names from Arthurian legend missing? Would you consider any of these names for a child? 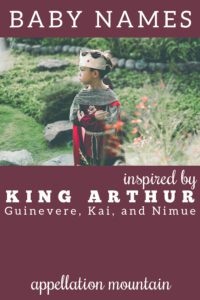 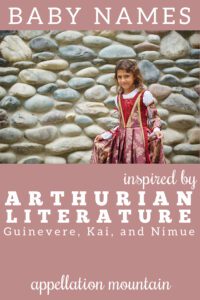