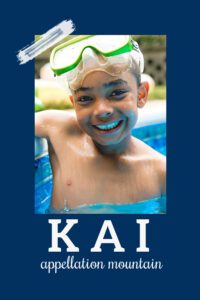 The baby name Kai might belong to a medieval knight or a modern surfer.

Thanks to Clio for choosing our Baby Name of the Day.

Back in the earliest tales of King Arthur and the Knights of the Round Table, we find Sir Kay, foster brother to the king. Sometimes he’s brave and loyal; later tales make the character boorish.

The knight’s name changes, too. Over the years and across languages, Kay becomes Caius, Keu, Kes, Kex, Kei, Cai, and yup, Kai. Caius suggests a link to the Latin Gaius, as in Gaius Julius Caesar. Or maybe the similarity is coincidental.

This dates the name to the tenth century or so. Cai remains in use as a masculine name in Wales.

The baby name Kai might also be short for Cornelius, Nicholas, and other longer names.

Credit for the nickname’s evolution often goes to Frisian – a group of languages spoken in Germany and the Netherlands. It might connect to the Frisian word kaimbe, meaning warrior. As with Gaius, it’s not clear if it explains the name’s roots, or is just coincidence.

Farther north, the name is also spelled Kaj and Caj.

Andersen penned “The Snow Queen” back in 1845. The story goes like this: the devil himself crafted a mirror to distort reality and make us see the world as ugly and cruel. It shattered into millions of pieces, and now we can get splinters in our eyes and hearts.

Best friends Kai and Gerda grow up as close as siblings. But as they grow, Kai falls victim to the splinters, and is taken captive by the Snow Queen. His family believes he has died, but Gerda never gives up. After an epic journey by reindeer, she finds him in the Queen’s permafrost castle, and frees him with her love.

… heard that Disney was making an adaptation of the fairytale.  It could be a huge boost for Kai!  Except it looks like Frozen is a complete reinvention of the story, with no character by the name.

As it turns out, Frozen did give us a Snow Queen, and a reindeer, and a rescue based on love. But the rest of the story is very different indeed.

The baby name Kai didn’t get a Disney boost. But by the time Frozen came out, it didn’t need one.

Keep digging, and some connect the baby name Kai to:

And, of course, the sound brings to mind boys’ names from 90s favorite Kyle to the Biblical Malachi.

Despite these varied international ties, the baby name Kai is linked most strongly to Hawaii, where it means sea. It appears in compound names, masculine and feminine, like Kainoa and Kailani.

That makes it a nature name, in the same category as River.

It first climbed in the 1950s, when Kai Winding, a Danish-born jazz musician, rose to fame. He recorded Time is On My Side before the Rolling Stones.

Pop culture took notice. Elvis starred in Blue Hawaii in 1961, followed by two more movies featuring the singer donning leis and cavorting on beaches. A handful of television shows were set there during the 1960s, too.

Then came Hawaii Five-O, a major prime time phenomenon from 1968 through 1980.

None of them gave us a leading man by the name. There was a Hawaiian actor named Lani Kai – born George Woodd – who had a role in everything from Blue Hawaii to Hawaii Five-O.

And the word for “sea” is everywhere in this island state, appearing in place names and character names, too.

Perhaps as more Americans vacationed in the new state or served at the island’s multiple military bases, the baby name Kai started to sound more familiar and accessible.

Another factor? At the time, Kyle was a fast-rising Top 100 boys’ name. It sounded right.

Celebrities embraced the baby name Kai for their sons.

NPR journalist Kai Ryssdal helped put the name in the spotlight. Ryssdal’s father is Norwegian, and the Marketplace host spent part of his childhood in Denmark.

Beginning in 2011, Lego series Ninjago gave us an animated ninja by the name.

It’s gently trended unisex over the years, too. That’s consistent with the name’s use in Hawaiian, as well as recalling Kylie and Kyla.

The baby name Kai belongs with the Sweet Spot names. It’s not too traditional, nor does it feel invented. And while the name continues to rise in popularity, it’s still far from the Top Ten. As of 2020, it ranks #93.

Of course, in Hawaii, the baby name Kai currently ranks #7. Compound names Kaimana and Kainalu for boys, as well as Kaia, Kailani, and Kailea for girls, also chart in the Top 100.

Assuming you live elsewhere, the baby name Kai makes for a great, modern choice for a boy. International, but still casual, Kai feels at home on a surfboard. And yet the name could suit anyone, from a noble knight to a 21st century world traveler.

What do you think of the baby name Kai? Would you consider it for a son? 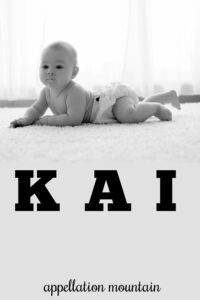