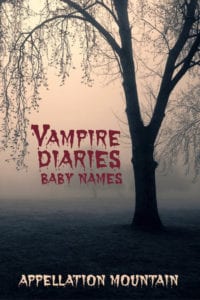 Vampire Diaries names come from the best-selling young adult books turned smash-hit series on The CW. While the original show ended its run in 2017, spin-off The Originals lasted until 2018, and its spin-off, Legacies, is still going strong. The third season of Legacies debuts in January 2021.

That’s quite a run. But then again, vampires live forever, right?

Like many a supernatural series, other creatures mix in, including witches and werewolves. And while some of them answer to fairly anonymous names, the three series have offered up dozens of appealing names – many of which are now rising in use for mere mortals.

Before we dive in, a confession: I’ve never seen the show. I know, I know – what am I doing with my time? So I can’t promise that this is spoiler-free, and if you’re a superfan and I get anything wrong? Please let me know! 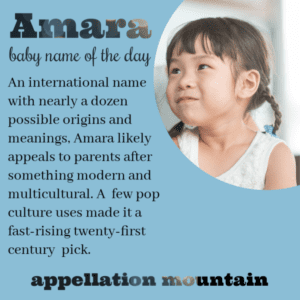 I’ve seen Japanese, Igbo, and even Mongolian roots listed for this name. But we’re talking vampires, so I suspect the Sanskrit or Greek meaning that matters here: immortal. In Greek, the word amarantos means unfading; it’s been used as a given name for centuries. In the series, Amara’s name is spot on. She’s the very first in a line of mystical, powerful women. And while the name offers a very on-trend sound, it also looks like the show deserves credit. Amara leaps in the ratings after the character’s storyline aired. Read more about Amara here.

Bonnie sounds simple and sweet. And while the Vampire Diaries character is known as helpful and compassionate, she’s also a powerful witch with plenty of backstory. That lends her charming given name a little bit of muscle. The character has appeared in the lion’s share of the series’ episodes, and probably gets credit for the name’s rise, too. It was unranked in 2009, returned in 2014, and now ranks a respectable #691 and climbing.  Read more about Bonnie here.

In Virgil’s Aeneid, the name Camilla belongs to a warrior. But Camille became famous thanks to Greta Garbo’s star turn as the title character of the novel penned by Alexandre Dumas, fils. The Dumas-Garbo Camille meets a tragic end. Both stories echo in Camille O’Connell’s storyline on The Originals. It’s not the reason the name has gained modestly, necessarily – we’re all about Camila and Millie, lately – but it hasn’t hurt, either. Read more about Camille here.

Another name from The Originals, Davina’s rise tracks more closely with the character’s 2013 introduction. Of course, it helps that Ava and Olivia were already established as Top Ten favorites when we met the powerful witch. While the name has never been common in the US, it’s the feminine form of a long-standing masculine classic: David. I’ve yet to write about Davina, but check back and I’ll update when I do. 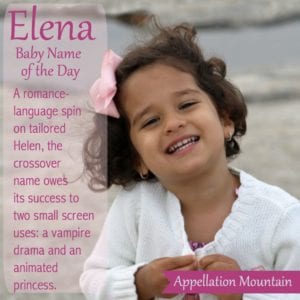 The original series hinges on Elena – her love for two vampire brothers and her status as part of an ancient line. In the books, Elena was a mean girl. But the series made her friendly and approachable .. and audiences loved it. Doubtless the character is a big part of the reason the name has more than doubled in the rankings since the series’ debut. But with history galore, and a very on-trend sound, I can imagine Elena catching on even without the supernatural series. Read more about Elena here.

I’ve called Georgia a sweet spot name, familiar – but not too common. Georgina takes the name in a longer, lovelier direction. And Georgie fits right in with Charlie and Alex and Jo. So I’ve been waiting for Georgina to gain in use. But the character appeared in just one season, not nearly long enough to return this name to the US Top 1000. I’ve yet to write about Georgina, but check back and I’ll update when I do.

In many ways, Hope heralded in the current class of virtue names for girls, from Grace to Felicity. But that means the name peaked in use right around the year 2000 – well before LJ Smith’s series became a household name. (Though the first books appeared as early as 1991.) Though, as it happens, Hope is a main character in Legacies, so there may still be time for this name to reverse course. Read more about Hope here.

Like many Vampire Diaries characters, Nadia appeared with centuries of backstory. But her name feels very twenty-first century. Parents in the US embraced it after a young Nadia Comaneci made Olympic history in 1976. And the name fared well for decades, reaching the Top 200 by 2004. But that means it wasn’t fresh and new when the show debuted. However, it’s still a great name, with a hint of glamour. Read more about Nadia here.

Firmly established as a Top Ten name when we met Olivia Parker, the Vampire Diaries couldn’t boost this name any further. And yet, Liv – the character’s preferred nickname – did rise dramatically once we met the witch. The Norse name Liv developed separately from Olivia; it originally meant protection, but is now associated with the word for life. Both seem appropriate for Liv’s story. Read more about Olivia here.

Sabine and Davina belonged to the same New Orleans coven on The Originals. She appears in fewer episodes, so maybe it’s not surprising that her unusual name remains rare. It’s a name dripping in history – the name originally referred to a tribe, and the Romans famously kidnapped several Sabine women. Read more about Sabine here.

The name Sophie rose along with Sophia and Sofia. Yet another witch from The Originals, Sophie Deveraux is drawn into the thick of the action when her niece, Monique, is involved in a ritual gone wrong. Sophie makes a logical choice for a New Orleans-born woman; its gently French, just like so many of the names on The Originals. But it’s also tough to untangle the name’s popularity due to the series from our general affection from the name family. I’ve yet to write about Sophie, but check back and I’ll update when I do. 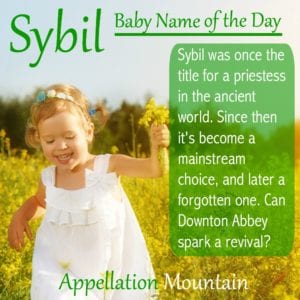 It’s on Downton Abbey. It’s on The Vampire Diaries. And yet, the name remains in style limbo, even while Cora and Marigold and Elena and Davina catch on. What gives? Well, first, Sybil has gained modestly in use. And while the period drama Sybil is a saint, the modern supernatural thriller Sybil is a villain. (Though that doesn’t always matter.) Both appear in a relatively small percentage of episodes, so that’s probably an even more significant fact. In any case, it’s a tailored, familiar, but rare name for a daughter, ancient in origin, but timeless in appeal. Read more about Sybil here.

Count Alaric among the names boosted by the series. The name of a Visigoth leader who sacked Rome back in the early 400s, it’s reasonable to assume anyone with the name would be quite ancient, indeed. But when we first meet him, he’s a regular(ish) history teacher. No question the character helped boost the name. It was given to a few dozen boys prior to the series, and now ranks in the Top 1000. Read more about Alaric here.

When we first meet Atticus Shane, he’s a professor at Whitmore College. And while the character is mainly featured in the fourth season, I think this name matters. Remember when Go Set a Watchman’s 2015 release threatened to make parents regret naming their sons after the principled hero of To Kill a Mockingbird? The name didn’t miss a beat, and I think that’s because other characters – from Vampire Diaries to Downton Abbey – had given us other ways to think about the name. Read more about Atticus here. 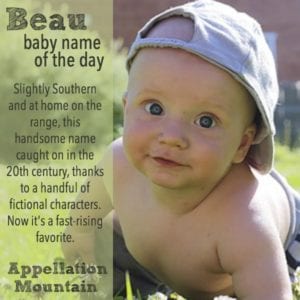 Handsome, energetic, and gently Southern, Beau belongs in New Orleans. Except this character isn’t part of that storyline. He’s originally from England, circa the turn of the twentieth century. The character debuts late in the Vampire Diaries’ run, when the name was already spiking in use. Read more about Beau here.

Yet another villain, Arcadius serves as the Vampire Diaries’ equivalent of Lucifer himself. Maybe that’s why Arcadius has yet to catch on. Or maybe it’s just too different for parents to consider. Cade, on the other hand, has fared well in recent years, a name with a modern vibe and connections to lots of other names. I’ve yet to write about Arcadius, but check back and I’ll update when I do.

Before there was the hurricane, Dorian was a character on all three shows: Vampire Diaries, The Originals, and Legacies. The name’s meaning is debated, but one possibility seems appropriate for the show: exile or wanderer. It brings to mind Top 100 picks like Julian and Adrian. I’ve yet to write about Dorian, but check back and I’ll update when I do.

Enzo first appears in the fifth season of the series, and we quickly learn how he became a vampire. His full name is Lorenzo, but he’s nearly always called just Enzo. Maybe the name is rising quickly because of its cool, on-trend sound. Or maybe it’s down to pop culture uses like this one. I’ve yet to write about Enzo, but check back and I’ll update when I do. 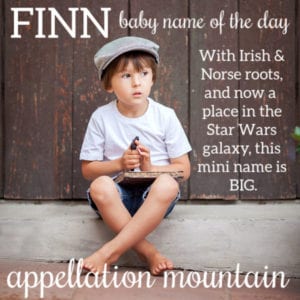 We meet Finn on The Originals, a character first born in the tenth century. He’s mostly a bad guy, or maybe he’s just misunderstood. With a wildly famous – and heroic Finn in the Star Wars universe – not to mention real life figures, this name doesn’t scream vampire. But the character is one more opportunity for parents to hear this brief, appealing name. Read more about Finn here.

I think Kieran is one of those undiscovered gems. The Irish spell it with a C – Ciaran – but that’s pretty all-but unknown in the US. In the series, the names belongs to a New Orleans priest who knows about the things that go bump in the night on The Originals. Like other Vampire Diaries names, it’s gained modestly in use over the last few years, but remains under the radar. I’ve yet to write about Kieran, but check back and I’ll update when I do.

Kol – spelled that way – first appeared on the Vampire Diaries before moving to The Originals. The character clearly inspired some parents to consider the spelling; 27 boys were named Kol in 2018 – a new record. But Kol owes much of its success to our affection for Cole and unconventional spellings. I’ve yet to write about Kol, but check back and I’ll update when I do.

Lucian ranks in the current US Top 1000, but Lucien? The French form of the name has been out of favor for years. It’s a pitch perfect name for a vampire living in New Orleans, though we first meet the character in medieval France, where the name makes every bit as much sense. I’ve yet to write about Lucien, but check back and I’ll update when I do.

Parents have fallen for globe-spanning nature name Kai, and that’s led to a search for longer options that include the sound. The unrelated Malachi, a Biblical patriarch, fits the bill. On Vampire Diaries, they use the spelling Malachai, adding an ‘h.” The character is yet another villain, but it’s possible that Malachai “Kai” Parker deserves credit for some of the names’ rise.

Handsome Rafael comes from the newest series, Legacies. He’s a werewolf, and a student at the Salvatore Boarding School for the Young and Gifted, founded by characters you’ll recognize from earlier installments of the Vampire Diaries universe. While the name hasn’t inched up in the rankings yet, the show is new. That makes me wonder if Rafael might be the new Alaric.

Would you consider any of these Vampire Diaries names for a child? Fans of the show, tell me – what character names have I missed?