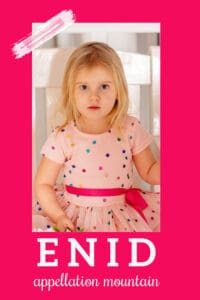 The baby name Enid is a vintage gem that just might be ready for a comeback.

Thanks to Sara for suggesting our Baby Name of the Day.

It means soul, spirit, life, or maybe purity – a positive set of associations.

Some sources connect the baby name Enid to the woodlark, usually via enit. But that seems far less likely. Because Enid’s story is very well known, indeed.

She’s sometimes called a Celtic goddess, but her story is very much that of a mortal woman – though an extraordinary one.

The Mabinogion compiled Welsh tales sometime in the 1200s or so, a mix of stories ranging from heroic quests to romances and more.

Chrétien de Troyes called the pair Erec and Enide. He wrote it during 1170.

It’s not clear if the Mabinogion borrowed from Chrétien de Troyes, or if both were inspired by earlier versions.

Here’s the story of Erec and Enide:

Erec is a knight in King Arthur’s service. He’s out with Guinevere and her companion while the other knights are off hunting.

A strange knight approaches the trio. The newcomers are rude and aggressive, and Erec decides he must pursue them.

Eventually, Erec finds himself far, far away. He meets Enide, the poor daughter of a minor nobleman and former soldier. Her beauty shines, as does her goodness.

First Erec has to challenge the strange knight, Yder. He borrows armor from Enide’s dad, and the two fight. Erec vanquishes his opponent and marries the beautiful Enide.

But it’s no happily ever after.

Instead, Erec is accused of neglecting his duties to the Round Table in favor of spending time with his new bride. The couple sets out on a series of quests to restore Erec’s good name.

Their adventures end, in some tellings, with the pair becoming King and Queen of a kingdom of their very own.

Alfred, Lord Tennyson wrote Idylls of the King between 1859 and 1885. The collection of twelve poems retells the stories of King Arthur, Queen Guinevere, and the Knights of the Round Table. It’s based on Chrétien de Troyes’ versions, as well as others.

By this time, Erec has changed names to Geraint.

In this case, the couple’s perilous journey ultimately demonstrates her loyalty – as well as demonstrating that Geraint can be a hero and a husband.

Just as significantly, it cements the name Enid as virtuous – a compelling mix of perseverance and strength.

Tennyson was already a successful poet, famous and growing wealthy, before he published Idylls of the King.

No surprise, then, that his work influenced popular names. Baby girls named Enid followed the success of his poem.

BLYTON and BAGNOLD and MORE

As the popularity of the name Enid grew, a long list of famous women emerged.

British author Enid Blyton remains among the most-translated authors of all time. While not all of her works have aged well, they remain widely known. If you’ve ever seen Noddy, a wooden toy resident of Toyland who goes on all sorts of adventures, then you’ve seen Blyton’s most enduring character. Television series based on Noddy were staples on British children’s television for decades.

There’s also Enid Bagnold, the author of National Velvet, as well as:

Beginning in 1983, author Francine Pascal launched a series of stories under the Sweet Valley High name. It eventually grew to 181 books, as well as spin-off series about the characters’ adult lives and even a television series that ran for four seasons in the 1990s.

The main characters were identical twin sisters, Elizabeth and Jessica Wakefield, living in the picture-perfect (and fictional) town of Sweet Valley, California.

Enid Rollins enters the picture as the best friend of the more serious twin, Elizabeth. Both girls are good students and tend to stay out of trouble.

At least at first. 181 books is a lot, and Enid experiences her own challenges in the soap opera-esque plotlines.

As names go, Enid was an unusual choice. Most of the characters answered to names you’d expect to hear in 1980s California. Besides the twins and Enid, other characters included Todd, Bruce, Nicholas, Cara, Heather, and Devon – to name just a few.

That’s not exactly a household name.

Except a handful of quirky, offbeat uses kept the name just on the right side of familiar in the post-Sweet Valley era.

The Barenaked Ladies recorded “Enid” back in 1992. The lyrics are about heartbreak, but apparently the band went out to eat at a diner and had a waitress named Enid. Her name inspired the song.

None of this really moved the needle on the popularity of the name Enid.

It’s true that 1998 an all-time low of seven girls received the name.

But that’s not quite a trend.

Except, of course, Enid sounds almost exactly like style star Eden. And with vintage names like Hazel and Esther back in the mainstream, maybe there’s the tiniest bit of interest in Enid.

Then along came Netflix’s Wednesday, a re-telling of The Addams Family. Daughter Wednesday is sent off to Nevermore Academy, her parents’ alma mater.

Wednesday’s roommate is the werewolf Enid Sinclair, an enthusiastic Nevermore student whose favorite color is bubblegum pink, and who works to win over Wednesday as a friend – against all odds.

There’s something about this Enid that harkens back to the original Athurian figure – brave and loyal.

Given the series’ hit status – and news that it has been renewed for a second season – could Enid be ready for revival?

If you’re looking for an offbeat choice with a surprising amount of steel and story, the baby name Enid might belong on your list.

What do you think of the baby name Enid?

First published on December 7, 2009, this post was revised substantially and re-published on January 31, 2023. 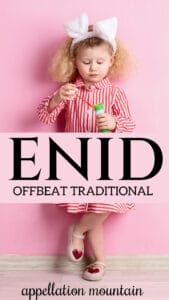 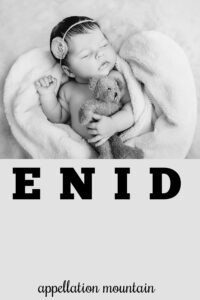