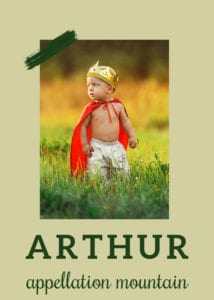 The baby name Arthur straddles the line between distinguished, vintage picks and friendly, approachable ones.

Thanks to Another and Katharine for suggesting our Baby Name of the Day.

THE LEGEND OF KING ARTHUR

Ask people to name a famous King and many will answer Arthur.

Some believe the Arthurian legends are based on a historical figure, possibly Artognou of Tintangel in Cornwall or Athrwys ap Meurig of Wales. Even a second century Roman military commander, Lucius Artorius Castus, has been suggested. The debate remains unresolved.

We all know the bones of the story: Arthur ruled the most enchanting Camelot. He earned the right by pulling a sword from a stone. He loved the fair Guinevere, but she broke his heart by falling for Lancelot, one of Arthur’s knights.

Speaking of knights, Arthur formed a most extraordinary group of heroes, seating them at a Round Table, and insisting they fight for good.

Geoffrey of Monmouth recorded the story in the 1130s, in his not-really-historical History of the Kings of Britain.

Others followed. In the late 15th century Thomas Malory’s Le Mort d’Arthur replaced it, only to be supplanted by Alfred, Lord Tennyson’s Idylls of the King, published in installments from the 1850s to 1880s.

More recently, the Tony-award winning musical Camelot debuted on Broadway in 1960 and hit the silver screen in 1967. More movies came in 2004 and 2017. That barely scratches the surface.

With so many possible origins, the name’s meaning seems elusive, too.

Bear, from the Celtic word artos.

Eagle, from the Germanic arn, which survives in names like Arnold.

Stone, from an Irish Gaelic word.

Most seem to agree that the first is most likely, which puts Arthur in the company of other bear-adjacent names like Theodore.

In several languages, the ‘h’ drops out, and the name becomes Artur or Arturo. Nicknames Art and Artie are the obvious choices, though there’s no need to shorten a two-syllable name.

Meaning and origin aside, the name remained in sparing use over the centuries.

Henry VIII’s older brother was Arthur, Prince of Wales, but he died before their dad. It was likely an attempt to link his lineage back to the legendary King Arthur.

The name remained traditional, but not especially common.

And then along came Field Marshall Arthur Wellesley, 1st Duke of Wellington, named for his paternal grandfather. That Arthur grew up to defeat Napoleon at Waterloo in 1815.

Queen Victoria named her third son (and seventh child) Arthur William Patrick. Not only did the Duke of Wellington serve as his godfather, the two shared a birthday.

The prince’s birth raised the name’s popularity even more.

From the nineteenth century onward, the baby name Arthur has been in steady use. Notables by the name include:

The baby name Arthur brings to mind fictional characters, too:

That puts the baby name Arthur close to the Top 100 most popular baby names … again.

It coincides with the name’s early rise in use.

There’s no question that parents are looking at the baby name Arthur with fresh eyes. With Henry in the Top Twenty, and Theodore not far behind, the quest for exciting, but traditional boy names is on.

Arthur seems poised to be one of the up-and-comers.

What do you think of the baby name Arthur? Would you consider it for a son? 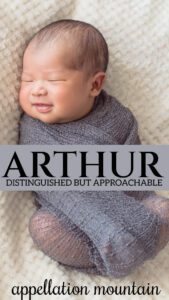