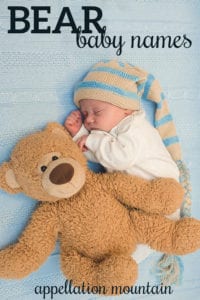 Bear baby names range from the mainstream to the completely unexpected. Odds are that this list includes a name or three that you might consider – whether or not a name with ursine origins matters to you.

Fuzzy Wuzzy didn’t make the cut, and neither did Yogi. (Though fans of Yogi Berra – who got his nickname from a teammate – might argue that one works.)

Just Bear is on the list. After all, Fox and Wren make the most popular lists. But, despite a series of celebrity birth announcements, Bear remains beyond the current Top 1000. And, with figures from Bear Bryant to Bear Grylls answering to the name, it feels more mainstream that some animal options.

Still, plenty of bear baby names fly under the radar. We’d call them current or classic, edgy or antique. But they’re all united by ties to that sometimes fierce, sometimes cuddly creature.

Read on for the bear baby names that you might consider for a son.

Ever regal, lately Arthur feels fashionable and vintage, too. Selma Blair chose it for her son in 2011, not long after Courteney Cox’s character mentioned it as a favorite on Cougar Town. It’s slowly, but steadily, climbed the popularity charts ever since.

The Germanic bern means bear. Plenty of saints answer to this name, and lately Bernadette seems to be on the verge of a comeback. But is Bernard ready for revival? Maybe … after all, Arthur seemed stuck in the attic just a few years ago.

Benno sounds like a cousin to Biblical Benjamin, but that’s not quite right. Instead, Benno comes from the same family as Bernard. If Milo and Leo (another animal kingdom favorite) are white hot, wouldn’t Benno fit right in?

The city’s name may – or may not – come from the German word for bear. But since a bear appears in the city’s coat of arms, and the Goldener Bär – the Golden Bear – is bestowed during the Berlin International Film Festival, it’s safe to say that Berlin fits with bear names for boys. Or possibly girls, since Jeremy Renner’s daughter is Ava Berlin.

A Scandinavian classic, Björn means bear. It’s also spelled Bjørn, depending on whether you’re in Norway or Sweden. Among the most famous bearers of the name is Swedish tennis champ Bjorn Borg, who racked up eleven Grand Slam titles before retiring at the age of 26. The name briefly appeared in the US Top 1000 during Borg’s heyday. Now it’s back, possibly thanks to Bjorn Ironside, from the History Channel’s historical drama Vikings.

Dove is the bird of peace, but Dov is the Hebrew word for bear. Other Hebrew animal names, like Zev – wolf, have also seen some use. We love that letter v, and short names for boys, like Jax, are having a moment. Dov could fit right in.

It looks an awful lot like ESPN, the sports channel. But Espen has its roots in Scandinavian languages. The original looks more like Asbjorn. It sounds a lot like Aspen, too. But this name means, roughly, “bear of God.” So that’s quite powerful, and rather nicely on trend – even if it takes some repeating and spelling in the US.

Most sites indicate that Humphrey means “peaceful warrior,” and that’s accurate. But the first syllable of the name can mean warrior, strength, or bear – all of which seem almost interchangeable. The Dictionary of Medieval Names from European Sources lists bear cub as the origin of the first syllable. Even without that detail, Humphrey might still make this list. In the 1950s, the Walt Disney studio created a series of shorts about Humphrey the Bear. He continues to cameo in Disney productions to this day. Other bears bear the name, including Humphrey B. Bear, a long-running children’s television series – and beloved cultural figure – in Australia.

If you know your Russian diminutives, you’ll associate Misha with Mikhail – Michael. But turns out that Misha has, for ages, been used as a Russian equivalent of bear, too. That’s because the word for bear – medved – sounds similar. The animals loom large in Russian folklore – and they’re quite populous in the country, too. The popular mascot of the 1980 Moscow Olympics was a cuddly bear named Misha, cementing the connection beyond Russia.

Orson Scott Card and Orson Welles make this name familiar. It started out as a surname, derived from the French ors, ultimately from the Latin ursus. It saw sparing but steady use in the late nineteenth century, but we’ve overlooked Orson for years.

In Brideshead Revisited, Aloysius was the beloved bear of Sebastian. An obscure form of Louis, this name was used in steady numbers through the early twentieth century.

An animated bear from a 1930s and 40s series, sleepy Barney looked everywhere for a good spot to nap. Today parents will almost certainly think of Barney Rubble, the big purple dinosaur, or How I Met Your Mother, which makes this less of a fit for a bear baby names list.

A British comic strip staple, Rupert also appears in books and television. He inspired the name of Stewie’s teddy bear on Family Guy. In the US, the association isn’t well known. Rupert Grint, the young actor who played Ron in the Harry Potter franchise, might make this name feel more wearable.

This name could be short for Edward, but is most often associated with Theodore – a classic name rising rapidly today. Teddy makes this list of bear names thanks to former President Theodore “Teddy” Roosevelt. When Roosevelt declined to shoot a defenseless bear cub, it prompted a political cartoon. A sharp-eyed toymaker spotted the cartoon, crafted a bear – and the rest is history.

If Teddy qualifies thanks to Theodore Roosevelt, surely Theodore belongs on this list, too.

Maybe it’s a stretch to call Barrett a Bear name. But the sound is almost, kinda-sorta there.

Kodiak is both an Alaska place name and a type of brown bear native to the region. The name comes from a Russian pronunciation of a native word for island. 37 boys received the name in 2018 – a new high, but still very rare.

Would you consider any of these bear baby names for a son? 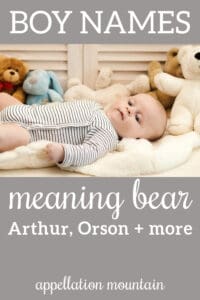 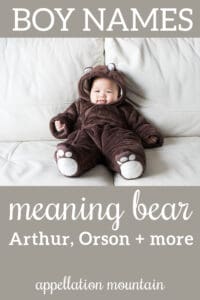