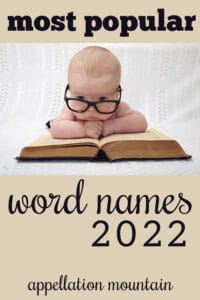 What are the most popular word names right now?

It sounds like an easy question, but it’s not always obvious.

Once upon a time, mason was a job. But now chances are that Mason is a child (or teenager, or even a grown-up) these days.

To make this list of most popular word names, it has to:

Even with those rules, that still left plenty of amazing word names for boys and girls alike – and you’ll notice that some of these appear on both lists, too.

MOST POPULAR WORD NAMES FOR BOYS

Over the last fifty years, Maverick has moved from the Wild West to the wild blue yonder, and now, onto birth certificates everywhere. It currently tops the list of most popular word names for boys.

We’re used to hearing Miles as a given name, but we can – and do – travel miles and run miles and measure MPH.

From the Latin word for messenger, it’s the source of Angela and Angelo, but lately it’s most popular as the word itself. It owes much of its popularity to Spanish-speaking families, but since it qualifies as an English language word, it makes this list, too.

Rome would be disqualified, but adjective Roman – as in Roman villa and Roman nose – just squeaks by.

Rowan continues to rise, a unisex tree name with a bright, modern sound. It’s an Irish surname, too, which further expands its appeal.

A stylish sound, a modern vibe, ties to the late River Phoenix … this word name succeeds for so many reasons.

It’s a lot to live up to, but Legend seems unstoppable. Unheard before the 1990s, Legend has followed Maverick into the mainstream.

A gentle summer name, August started out as the very opposite. During the early days of the Roman Empire, Augustus – meaning venerable – was given as an honorific to the emperor himself.

An action verb name that feels equally polished and energetic.

Jasper is a stylish gemstone name, one of the few that feels exclusively masculine. It’s also sometimes associated with the Three Wise Men, from the Nativity story.

Atlas started out as a character in Greek myth, but it’s broadly known as a book of maps, too.

Dean started out as an ecclesiastical title, but is now most commonly heard as a title in academic settings – think Dean of Students.

King rules. But, as with several of the most popular word names, whether that’s a bold and bragging statement, or a spiritual reference, isn’t always obvious.

Another long-established surname and given name, Grant also appears as a verb and noun in English quite regularly.

A gun, a beer, a young horse. Colt succeeds as a baby name, too, possibly thanks to surname name Colton ranking in the US Top 100.

An Arizona place name, Phoenix started out as a mythological creature, a bird rising from its own ashes.

Cash is king – erm, except that King actually ranks higher on this list. Let’s say that Cash is cool, bringing to mind music legend Johnny Cash.

Once a surname for someone living near a path, Lane now feels like a brisk, bright name for a child.

A surname name long used as a first, Wade also appears in the dictionary as a verb.

A royal title name, but also possibly given in homage to the legendary musician.

A nineteenth century and early-twentieth century favorite, regal Royal is back today.

We’re used to Jay as a first, and sometimes a nickname for James or another traditional boy name starting with the letter. But it makes this list thanks to the birds – think blue.

Originally, Sterling referred to a silver penny. But now it can simply mean anything of high quality. That makes it a little bit of a virtue name.

A military title name with more history than you might expect as a first, and also a big, bold pick in the key of Maverick.

Reid feels like more of a surname, and it’s the far more popular spelling of this short, strong choice. But Reed takes it in a nature name direction, thanks to the tall grasses. And since those grasses are used in musical instruments, it fits with Harmony and Aria, too.

An herb, but also a word meaning wisdom, as well as a shade of green, there are so many reasons to consider Sage for a child’s name.

A brother for Remington, Cannon originally referred to artillery. But it also sounds like so many stylish surname picks, from Landon to Cameron.

MOST POPULAR WORD NAMES FOR GIRLS

Operatic Aria owes its success to Pretty Little Liars, Game of Thrones, and our never-ending affection for A names and ends-in-ia picks.

Another word name with history, this nineteenth century favorite continues to climb.

Take a popular television character, factor in Will Smith’s famous daughter, and no surprise that gentle nature name Willow ranks among the most popular word names for this generation.

A mini name in the key of Ava, Ivy is among the hottest of ecovintage choices for our daughters.

It started out as a place name, but today we count Paisley among the most popular word names because of a pattern. Paisley was first produced in the Scottish town.

Ruby leads the gemstone names for girls, and also represents a popular source of inspiration for girls’ names: the color red.

A beautiful season, and a tailored, modern favorite word name for girls.

First heard in the 1970s, Serenity sounds like old school Puritan virtue names like Amity, but is very much a modern favorite.

Jade tops the list of the literally green names for girls, a high energy choice with a distinctive sound.

A sweetly musical word name option for a daughter, similar to Melanie and so many other three-syllable girl names ending with -y or -ie.

Multiple Rose names compete for our attention, but it’s the elegant, straightforward Rose that makes our list.

A fresh and appealing floral, Daisy is connected to classic Margaret – but also stands nicely on its own.

Elaborate Magnolia fits in with so many floral favorites. This one feels slightly Southern, too.

A sunny, casual name for a daughter.

This nature name caught on first for our boys, but science fiction – Doctor Who and Firefly – suggested it for our daughters, too.

Former favorite Amber has faded, but Ember – borrowed from the coals of a fire – is catching on.

Popular with the Puritans, and still going strong in the twenty-first century, Faith feels like the most obviously spiritual choice on the girls’ list.

Jasmine was a hit long before this name soared on Aladdin’s magic carpet. Today it feels like a culture-crossing botanical that fits in with so many floral favorites.

Another of the most popular word names shared by our sons and daughters alike, Sage feels modern, but tied to history and the natural world alike.

Olivia holds the top spot, but it’s tailored Olive that counts as the word name.

Famous for the Colorado city, Aspen started out as a tree name, and so makes this list.

A powerful word, full of strength and optimism.

A vibrant tree name that also appears on the list of most popular word names for boys.

A sweetly spare name for a daughter, inspired by the bird.

Another modern meaningful, Journey suggests a life of adventure.

A spiritual name, Trinity refers to a Christian principle. But it’s also well-established as a given name.

A word name boosted by its meaning, as well as that appealing middle V.

A floral name long used as a first.

Another seasonal choice, and the fastest rising of the four.

Another bold borrowing from all things royal.

Another name that rules.

A 1990s favorite, Destiny paved the way for names like Trinity and Journey.

A name for a child born against all odds.

A long-time word name, Joy brings to mind the central character of Inside Out, the very personification of happiness.

One of several bird-inspired names, set to soar.

Another name with ties to all things musical and literary.

Yes, Scarlett is the far more popular spelling. But Scarlett comes from the surname. It’s Scarlet – with just one T – that belongs on the list of most popular word names.

A color – and a branch of the military. Navy owes something to Ava, maybe even more to Ivy.

Would you use one of the most popular word names? Or do you like your word names more obscure?