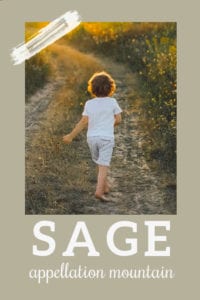 The baby name Sage combines a virtuous meaning with ties to the natural world.

Sage just plain sounds like a given name. It falls midway between late 1990s favorites like Paige and Gage.

But none of them claim much history.

Sage debuted in the US baby name data in 1963, when it was first given to five girls. By 1968, it appeared on the charts for boys, too.

The baby name Sage’s 1960s debut suggests that it might be part of the counterculture’s embrace of all things green and growing. Sunshine fared well in the late 1960s. So did Rain and Misty.

But names borrowed from herbs have plenty of history. Basil and Rosemary feel more like vintage charmers than modern innovations.

The herb sage takes its name from the Latin salvus – healthy – via the Old French sauge and Old English sawge.

It’s been said to remedy a host of ailments, and was once common in kitchen gardens for both cooking and for use in home remedies. An old saying went like this: Cur moriatur homo cui Salvia crescit in horto? In English: Why should a man die while sage grows in his garden?

The baby name Sage’s other meaning – wise – comes from a completely separate source: the Latin sapere.

It isn’t just about book smarts, but about taste and judgment, too.  The Latin sapere originally meant “to taste.” Sap – liquid from a plant – shares the same root.  This put the baby name Sage in the same category as modern virtue names like True.

It’s both a adjective and a noun. A smart person can be described as sage; but the Seven Sages of the ancient world were a group of Greek philosophers.

Their names aren’t terribly wearable today: Cleobulus, Thales, Pitticus, Bias, Solon, Chilon anyone? – but the baby name Sage has been gaining use for decades.

The 1970s gave us Sage Stallone, son of actor Sylvester, former NFL quarterback Sage Rosenfels, and ESPN correspondent Sage Steele. They were among the first wave of Sages born in the US.

While the early numbers gave this one to the girls, by 1990 they pulled even.

But it also ranks a respectable #449 for boys, making this a truly unisex option.

Overall, the baby name Sage is a shapeshifter. It’s a humble nature name with intellectual overtones, a single-syllable, twentieth-century discovery with complex, ancient roots. There’s much to love about Sage.

What do you think of the baby name Sage? 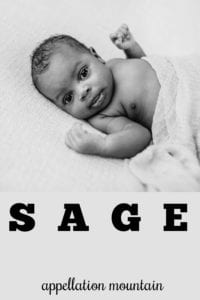