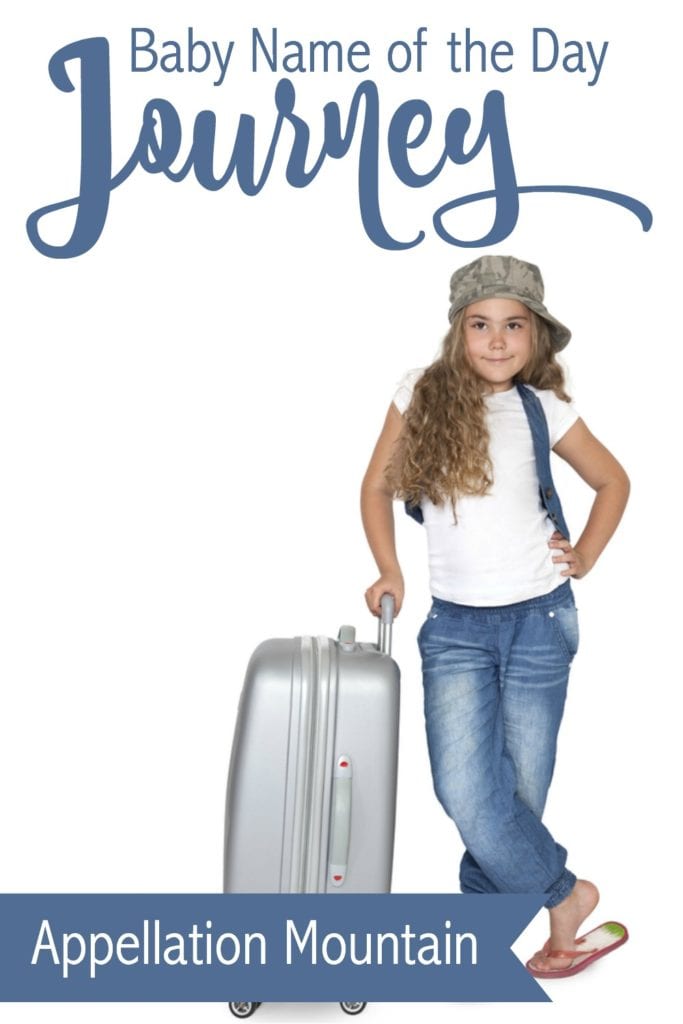 Journey is a modern virtue name with an adventurous vibe.

Thanks to Lyn Z. for suggesting our Baby Name of the Day.

Journey: To Drudge or to Trudge

This word brings to mind travel, often ambitious, continent-crossing travel. Other times, it suggests a transformation of a more personal type – life’s a journey.

But one thing is for certain: it wasn’t a name at all until very recently.

Journey is a whispered-down-the-alley take on the Latin diurnus – one day. In Old French, journee meant the day’s work. A journeyman is one who does a day’s work – a skilled craftsman who has finished an apprenticeship, but is not yet a master in his own right.

The occupational sense is less common today; instead, it sometimes refers to one who is middling in skill – reliable, but not a star player.

It could also describe the amount of land that could be plowed in a single day, and so became a surname for someone who worked such a piece of land.

By the fourteenth century, the word referred to travel as well as work. In both cases, it described a day’s worth of effort.

Now, in age where we can cross oceans in a matter of hours, it’s taken on a romantic appeal.

Interestingly, the first uses of Journey as a given name coincide with the early success of the rock band by the same name.

Formed in 1973, Journey scored major hits in the early 80s, including 1981’s “Don’t Stop Believin'” and the ballad “Open Arms.” They played to sold out stadiums and sold millions of records.

And in 1981, seven girls were given the name – the first time it registered on US Social Security birth records.

Fewer than five children received the name in 1982, but in 1983, there were five girls and six boys.

Were those early 1980s children named after the band? I cannot say, but the numbers suggest that it is very possible.

Journey: By the Numbers

That almost makes it mainstream – more than 1,100 girls were given the name.

Alternate spelling Journee is now in the US Top 500, too.

With names like Destiny and Trinity in the girls’ Top 100 in recent years, it’s no surprise to find Journey succeeding. It’s spiritual but not specifically religious, and it’s a word name that’s very unlike anything today’s parents would have heard growing up – but it still sounds like a name.

What Journey lacks is a single high-profile use. A handful of minor celebrity kiddos, a character from one episode of Doctor Who, a shoe store in many suburban shopping malls. None of it is enough to boost then name, and yet it is undeniably succeeding.

Credit a mix of factors, including our long-time love of the letter J and the interest in modern word names rich with meaning.

Overall, it’s a name that’s likely to succeed, bold and distinctive when compared to names of the previous generation, but perfectly at home in the kindergartens of the early twenty-first century.

What do you think of Journey? Do you like it better for a boy or a girl?