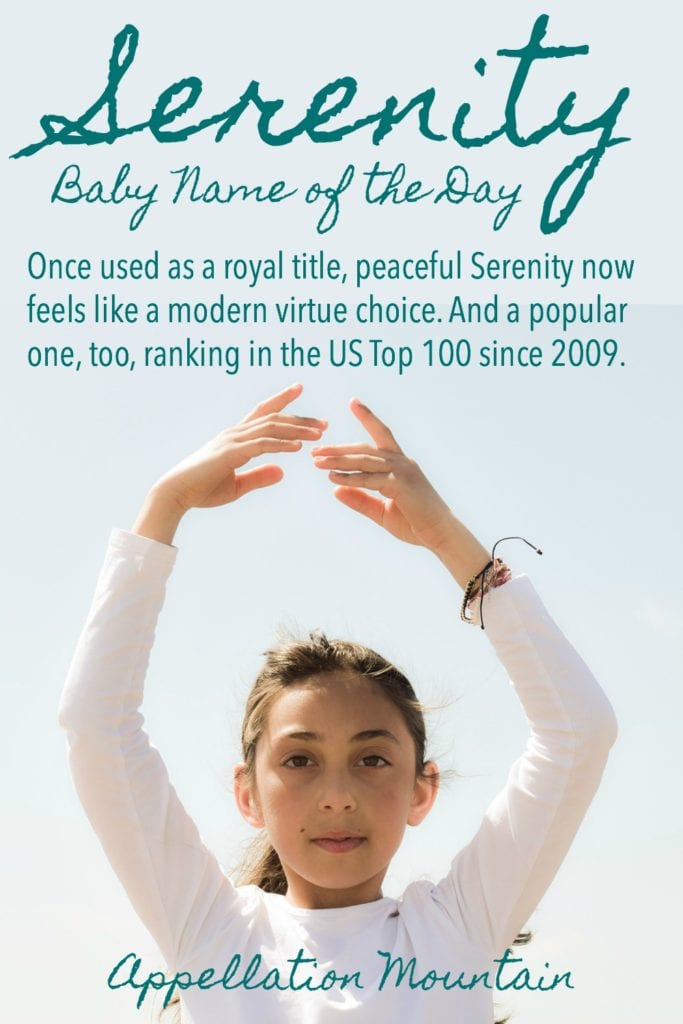 Serenity makes for an admirable goal, as well as a sci-fi spaceship … and, in recent girls, a modern virtue name, too.

Thanks to TruStyle for suggesting our Baby Name of the Day.

File this one somewhere between word name and given name. To be serene is to be calm, tranquil, at peace. The word inspired the virtue name Serena by at least the fourth century.

Serenity, on the other hand, came into general use as a given name far later. It was given to more than five children for the first time only in 1972.

One of the long-standing uses of the word referred not to peace, but to power.

It first referred to Roman emperors, and later popes. Several monarchies adopted the style “His Serene Highness,” including Monaco. When Grace Kelly married Prince Rainier in 1956, she became Her Serene Highness.

Maybe – just maybe – Grace’s image, and her oh-so-appropriate given name – started to shift the word’s image from merely regal to truly poised.

Chances are that this name started out as a deeply spiritual choice. The Serenity Prayer, authored by Reinhold Neibuhr, appeared as early as the 1930s, and was published around 1951.

Even if you don’t follow any specific faith, the opening words “God grant me the strength …” ring familiar to many. Credit the prayer’s inclusion in many twelve-step programs and popular culture in general for such widespread recognition.

It also transformed this word into a modern virtue.

Their historic achievement happened in 1969. The Sea of Tranquility was named way back in 1651 by a pair of Italian astronomers.

They’re also responsible for naming the Sea of Serenity, another lunar mare – a plain, rather than an actual body of water – though it never made the same headlines.

I suspect there’s the tiniest shift in language during the 1960s. If serene previously connoted the dignity of a title, the changing culture pushed it into a different category.

By 1961, Serena had re-entered the US Top 1000, and remains solidly established there today. It’s another factor that explains Serenity’s slow transition to given name.

Here’s a fun twist: Japanese anime sensation Sailor Moon gives us a Queen and a Princess by the title. That princess, of course, eventually turns out to be Sailor Moon herself.

In English versions, she’s known as Serena – and sometimes Selene, inspired by the Greek moon goddess. In fact, Serena might be a nod to the ancient figure.

In any case, children who came of age during the 1990s and followed Sailor Moon probably warmed to the idea of the virtue word as a name.

Then came Seinfeld. The smash hit sitcom gave us George Costanza, and his fabulously difficult parents. During season nine, George’s dad, Frank, is advised that his blood pressure is too high. To combat this, he should chant “serenity now” whenever he feels stress.

Instead, Frank hollers the phrase.

Like so many Seinfeld quotes, it quickly filtered into pop culture.

The downside? It makes the word a punchline. And yet, there’s no question that this had become a virtue.

The characters travel through outer space in a Firefly-class spaceship named Serenity.

When the series inspired a feature film in 2005, it took the ship’s name as the movie’s title.

It’s the use that ties together the threads, confirming that this name is modern and virtuous, bold and aspirational, too.

Serenity: By the Numbers

The numbers of girls named Serenity spiked after the series debuted, and again following the release of the feature film.

Besides all of the pop culture and spiritual reasons this name resonates, it fits with that familiar three-syllable, ends-in-y pattern we’ve long loved for girls’ names, from Dorothy to Kimberly to Emily to Everly.

If you love meaningful names and modern choices, too, Serenity hits the right note.

Would you consider this name for a daughter? Do you like your virtue names old-school or more 21st century?