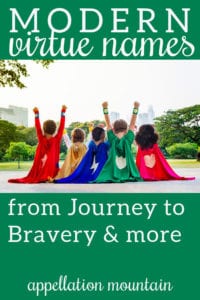 Modern virtue names pick up where the Puritans left off.

Of course, we’re still using plenty of virtuous names from earlier eras. Think of Felicity and Grace, Faith and Mercy. They’d feel right at home on Plymouth Rock way back when, or on a playground right now.

But the last few decades have seen a rise in modern virtue names. Some lean a little bolder. Many are less specifically Christian. And while subtle picks like Sage make the list, more of them feel like they’re straight out of the dictionary. They’re word names with big meanings – sometimes ones that could be tough to live up to.

And yes, as they become more and more mainstream, we’re less likely to notice if Maverick is a little bit of a rule-follower or Chance likes to play it safe.

We know that meaning matters when naming our children, so it’s no surprise to see this modern virtue names on the rise.

This one is a little bit of a cheat. Abel comes from a Hebrew word meaning breath, but it looks almost exactly like able, as in capable.

Ace is the king of the cards, a winning serve in tennis, an unstoppable fighter pilot. Is being top of the heap a virtue? Maybe. But the accuracy and strength implied by some of those uses certainly counts.

A Buddhist term meaning enlightenment, Bodhi isn’t an English-language word. But the name’s rapid climb in use seems tied to our embrace of modern virtue names.

Old school virtue required the bearer to do something – to be Thankful or exhibit Patience.  Chance isn’t a virtue in the conventional sense, but the idea of fortune – presumably, good fortune – seems rich with meaning.

At first glance, Chase is an action verb. It’s a brother for Dash. But there’s also something about Chase that implies ambition and effort. So while it probably reads preppy and buttoned-down – even banker – to some, I think there’s space to consider Chase virtuous, too.

A modern, masculine equivalent of Faith.

It sounds fictional and fanciful. After all, there’s a Dream Kardashian. And yet, this name also evokes one of Martin Luther King’s most famous speeches. When “dream” is shorthand for “possibility,” it belongs on this list.

A name that signals beginnings – in the Bible, of course, but in so many other things, too.

The crown or ring of light worn by saints and angels, Halo feels specifically spiritual and virtuous. Unless, of course, it’s the video game that inspired the name choice.

Musical and mythological, Harmony offers plenty of associations. But it makes this list because Harmony also means agreement.

A name implying safety, boosted by its meaning, as well as that stylish middle V.

There’s something 80s rock star about this name, but also something spiritual and meaning-rich. Journee and Journi also rank in the girls’ US Top 1000.

An undeniable virtue name, Justice feels patriotic – the Pledge of Allegiance ends with “and justice for all.” But it’s bigger than that, the kind of principle that feels enduring and universally good.

If Legacy implies that the child is merely there to uphold their family’s heritage, then the name feels rather burdensome. But Legacy also suggest the idea of embracing your history and carrying it forward, which qualifies as virtuous.

Legends are written about heroes – and villains, too. But presumably, parents who choose this name for a child are thinking of the former.

A twin to Justice, Liberty brings to mind the American Revolution. It’s had a longer run as a sometimes-heard name than many on this list. Built-in nickname Libby makes it feel almost traditional.

It’s a colorful bird known for going up in flames, then being reborn from its own ashes. Crazy inspiration for a baby name? Maybe, but the idea of rebirth is an appealing one, if not exactly a virtue. The acting family has helped propel Phoenix into the mainstream, and the stylish letter x hasn’t hurt.

A name rich with potential.

This name literally means wise, and also brings to mind The Seven Sages of Greece – a septet of ancient philosophers.

Saint fits more closely with titles like King, or possibly Earl and Duke. But to people of faith, striving to imitate the qualities of saints is a positive. The name might imply this goal.

One of many modern virtue names that convey peace.

It sounds like a Pilgrim-perfect choice, but Sincere is actually rising in use now.

Tru recently debuted in the US popularity rankings, though names like True, Truth, and Truly have been on the edges for years. It’s clearly virtuous, a name with a strong and admirable meaning.

An anchor holds you down, which can be a bad thing – but easily suggests a steady, settled presence, too.

An arrow is a weapon, which makes this a strange fit for virtue names – at first. Arrows are also known for flying straight, for hitting their targets. In that sense, Arrow conveys a sense of purpose and focus – admirable qualities, both.

If Joy and Felicity are names, why not Bliss?

Slightly more subtle than Bliss, Blithe and Blythe mean cheerful or friendly. The ‘y’ spelling outpaces the ‘i’ version.

A bold word choice, but possibly a stunning middle name.

Take Avery, add a Br, and the unexpected Bravery might be a possibility.

A cousin to light-filled Claire and Lux, as well as smart Sage, Bright feels more accessible than many potential short word names.

Another word for honesty, with a very name-like sound.

A rarity that implies a child is meant for great things.

A logical follow-on to virtue names like Felicity and Amity.

There’s something antique about Constance, but add a -y and Constancy fits with modern virtue names.

There’s more history to Dare than you might guess. It makes this list because it implies a certain fearless risk-taking.

Gloria remains stuck in style limbo, but virtuous word name Glory might substitute. It feels a little bit spiritual, but Glory is a secular concept, too.

Golden implies something precious and valued.

A harbor is a refuge, keeping ships safe from storms. That makes it a fit for this list.

Harvest implies abundance, as well as the practice of planting and stewarding crops.

Honor has some history as a given name, though often it was tweaked slightly. (Think Honora, Honoria, and Honore.) But just Honor fits best with modern virtue names.

Undeniably a virtue, and an attractive sound, too.

Noble previously ranked in the US Top 1000, but parents probably aren’t picking Noble for its vintage status. Instead, to be Noble is to excellent.

As in True North, an important concept in navigation.

Like Sincere, Patience has some history. But it feels fresh and new today.

A little bit Puritan, a little bit Vulcan, but overall an attractive sound.

An even rarer possibility than Journey, but appearing on the list for all the same reasons.

As in the American Revolution’s Paul. But Revere makes this list because it also means respect.

Another verb name with an uplifting meaning.

Along with Haven, a name that conjures up protection.

Originally an Old English word for little star, Sterling is also a term for British currency, and a synonym for excellence.

As in bravery, though Valor might feel even more name-like.

While it might be a lot to live up to, we all want our children to exhibit this virtue.

The name for a branch of Buddhism, ultimately derived from a Sanskrit word referring to a meditative state. But in American parlance, Zen means relaxed, calm.

In astronomical terms, the zenith is the highest point a celestial object reaches in the sky. It’s also a synonym for peak, which makes it something of a modern virtue name.

What do you think of modern virtue names? 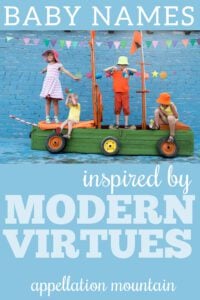 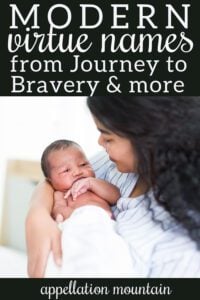