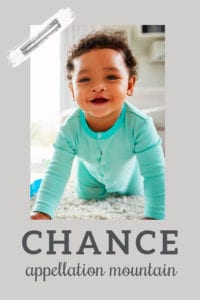 The word chance has been around since at least the 1300s. It comes from the Old French cheance, referring to luck, ultimately from the Latin cadere – to fall, as in the way that dice fall.

Chance signals opportunity and fortune – possibly good fortune. But it also suggests risk and randomness. We take our chances – accepting what happens. And a chance can be a gamble – the equivalent of a lottery ticket or a spin of the wheel.

Philosophers have discussed it, from (at least) Aristotle onward.

If you were a gambler, you might’ve ended up with the surname Chance.

Or you survived an accident, or otherwise were considered fortunate – so much so that it became part of your identity.

And, of course, a handful of names that sound like the English word Chance were also absorbed. These include the German Schantz, which – as luck would have it – can also refer to games of chance. But it may have other origins, too.

We know that surname names often migrate to the first spot.

But if the baby name Chance was used, we don’t see it in the records. Not until 1955, when five boys received the name.

Because the word is so common in English, finding an explanation proved challenging.

One guess: A 1955 horse racing movie titled The Fighting Chance might be just enough to explain a birth or three. (Though there’s a Lucky Jim in the movie – but no one named Chance.)

Or maybe it was just luck.

By 1959, Tennessee Williams had transformed two earlier one-act plays into Sweet Bird of Youth, the story of Chance Wayne. It became a 1962 movie starring Paul Newman as Chance.

The play leaned a little dark, with a gory ending. But the movie? It was far sunnier, with many of the harshest parts of the original discarded, and a happier ending for Chance.

The movie was also a hit, earning several cast members Academy Award nominations and making plenty of money. It also seems to have boosted the baby name Chance. In 1961, just eight boys received the name.

Then along came Dean Chance.

In 1964, Chance became the youngest Major League Baseball pitcher to ever win the Cy Young Award. He’d played his rookie season in 1962 – meaning it’s possible Paul Newman doesn’t get all the credit for the name’s initial rise.

Another movie likely gets credit for making the baby name Chance a mainstream favorite.

In 1970, Jerzy Kosinksi penned the novel Being There. It became a 1979 movie starring Peter Sellers in an Oscar-nominated performance.

Being There tells the story of a simple-minded gardener in the employ of a wealthy family. Through a series of misunderstandings, he becomes a Washington pundit … and perhaps a candidate for high office himself.

As a gardener, the character was known as Chance. But in his mistaken identity, he became known as Chauncey.

In fact, Chauncey – a preppy surname name – ranked in the US Top 1000 most years from 1880 throughout much of the 1900s – often shortened to Chance. Aviation pioneer Chauncey “Chance” Vought is one example.

Maybe the Chauncey/Chance connection encouraged others to view it as more like Buddy or Sonny than a potential given name.

In the 1980s, Marvel’s Spider-Man gave us Nicholas Powell, a professional gambler looking for a bigger thrill. The character answered to Chance.

And the Sunday comic strip Hi and Lois was written first by Dik Browne. His son, Robert “Chance” Browne, took over in 1989.

By the 1990s, the name appeared regularly.

And, later that same year, Jean-Claude Van Damme starred as Chance Boudreaux in action movie Hard Target, which marked John Woo’s directorial debut in the US.

Of course, Chance has another association these days: Chance the Rapper.

Born Chancelor Bennett, he scored a string of Grammy Awards in 2016, and continues to record and build his career.

As for Chancelor, it’s a title – normally spelled chancellor. The most common use today is for the head of a university – though it can also be used in religious settings. The

There’s something light-hearted about the baby name Chance. It’s easy and breezy, an adventurous name. And the idea of fortune makes it something of a modern virtue pick, a brother for Journey or Haven.

And yet, it fits neatly with one-syllable boy names, from traditional Jack to nearly as modern Chase.

Would you consider the baby name Chance for a son?

First published on January 19, 2011, this post was revised substantially and re-published on November 15, 2020.