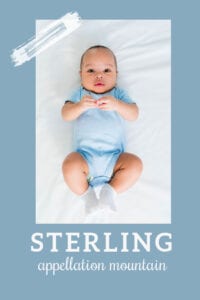 The baby name Sterling brings to mind something of great value – certainly an appropriate choice for a beloved child.

Thanks to Jess for suggesting our Baby Name of the Day.

If you’ve been to the UK, the baby name Sterling might seem about as subtle as calling your kiddo Cash.

The official currency of Great Britain is the pound sterling. Fun fact: it’s the oldest currency in continuous use. And while you wouldn’t name your baby Dollar, we tend to talk about pounds, not pounds sterling. At least in the US, that makes it even less connected to money.

But there’s so much more to the story.

Stirling – with an i – is a surname, borrowed from a city in central Scotland. The meaning and origins are debated, but it’s unrelated to the currency.

There’s also Starling, as in the bird.

All three have appeared as surnames, and probably mixed and mingled over the years.

But back to our wallets: in the case of the currency, Sterling almost certainly comes from the Middle English word sterre, or star. That’s because at least some coins were minted in medieval English with stars pressed into their design. The -ling ending meant “little.”

It’s not a super satisfying answer, because relatively few coins from the era include stars.

But the idea has stuck, and so we often say that the baby name Sterling means little star.

And then there’s sterling silver.

Pure silver is much too soft for many uses. Instead, an alloy of 92.5% silver, mixed with copper (or another metal) is used to make everything from coffee pots to belt buckles.

We’ve called that alloy sterling silver since somewhere in the 1100s – if not sooner.

And it was a big part of our lives!

Paul Revere is remembered for his midnight ride, but by profession, he was a silversmith.

By the Victorian era, sterling silver was so common for utensils, that we now call forks, knives, and spoons silverware – even if they’re often made from other materials today.

Many of us don’t use sterling silver on our dinner tables, and we may not ever visit England. But we do recognize the concept of excellence. So it’s probably best to think of the baby name Sterling as a virtue name of sorts.

That’s the highest the baby name Sterling has ranked since the middle of the twentieth century.

A few famous figures include the actor Sterling Hayden, whose long career spanned the 1940s through the 1980s. Sterling Morrison played guitar for The Velvet Underground. The best known person at the moment might be Sterling K. Brown, Golden Globe-winning star of This is Us.

They won’t be the last, though.

And while the name continues to lean masculine, it’s trending upward in use for our daughters, too. 121 newborn girls received the baby name Sterling in 2020 alone. That includes NFL quarterback Patrick Mahomes’ firstborn, daughter Sterling Skye.

The baby name Sterling combines elements of Haven and Royalty, Stella and Orion. It almost fits with the preppy hellraisers, a buttoned-up name with a wild side. Except Sterling also keeps company with River and other nature name possibilities.

It’s a choice that shines, a name that conveys accomplishment. And yet, it’s still just on the right side of subtle, a traditional pick that’s more like Will than Reign.

What do you think of the baby name Sterling? Would you use it for a daughter or a son? 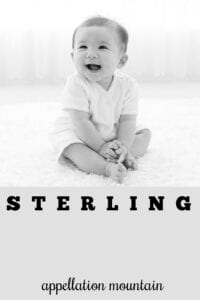