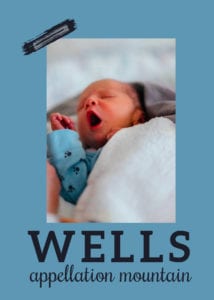 Our Baby Name of the Day is another recent debut on the popularity charts.

If your ancestor happened to live near a spring, you might have ended up with the surname Wells. In England, there’s a famous city built around a cathedral in Somerset; but that’s far from the only one. Surnames from other languages carry the same meaning, and were sometimes translated into the English word, too.

It’s a verb as well as a noun. And while water wells are the most common type over the ages, plenty of things might be drawn from a well: salt, oil, or even wishes.

Plenty of sites are considered sacred, or associated with saints or local legends.

Archeologists trace them back many millennia BC, throughout the ancient world, so no surprise that stories abound.

There’s a double-meaning to this word. Besides the connection to water, if you’re well, you’re doing fine. It appears throughout Indo-European languages. The German affirmative jawohl is a cousin. The meaning shifts over the centuries and across cultures, but it implies good fortune and good health.

Today the concepts have almost merged into one. It’s a positive, life-giving image, a mix of the traditional and the fantastic.

Speaking of the fantastic, one of the most notable bearers of the name was known by his initials: H.G., for Herbert George.

The English author penned some of the most unforgettable works of science fiction. He’s considered a father of the genre. From 1895’s The Time Machine to 1898’s The War of the Worlds, his works live on well over a century after their publication.

It lends the name a literary vibe.

But there’s another aspect to this name, courtesy of the California Gold Rush.

Back around 1850, New Yorker William G. Fargo teamed up with Henry Wells of Vermont to launch an express service to California. They provided banking services, too. A panic hit in 1855, but their company survived – and prospered. Today it’s a widely-known bank, but still uses the traditional mail wagon as part of its logo.

Scandal has hit the institution in recent years, but somehow that doesn’t seem to tarnish the name. And banker names – think Chase – tend to feel polished and preppy.

Pregnancy guru Rosie Pope gave the name to a son in 2011. In the Pope family, it’s short for Wellington. His birth was part of her Bravo television series, Pregnant in Heels.

Of course, it came at a good moment. Brooks also rose in the same era. So did other W surname names, like Walker and, more recently, Wilder.

A handful of small screen uses have boosted the baby name Wells even farther.

Beginning in 2014, The Flash debuted on the CW, with Tom Cavanaugh as Dr. Harrison Wells, the brilliant scientist responsible for Central City’s particle accelerator – which transforms Barry Allen into a superhero.

That same year, the name appeared on a second CW series – The 100. In this case, it was a first name – Wells Jaha, son of a major character, Chancellor Jaha.

THE NEXT BIG THING?

With so many positive associations, and enough pop culture use to keep it on parents’ radar, it’s easy to imagine Wells following so many other stylish surname names straight up the popularity charts. But with multiple, positive meanings and a nicely on-trend sound, that’s probably a good thing.

What do you think of the baby name Wells? Would you consider it for a son?