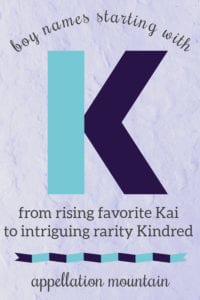 Boy names starting with K tend towards the trending.

There’s Kevin, of course, a name that helped define a generation, from classic Christmas movie Home Alone to Kevinism, a term for the German (and elsewhere in Europe) dislike of so-called American names.

More recently, Kayden (and Kaiden and Kaden) dominated K names for boys. Plenty of choices on this list are more popular when spelled with a C, making K feel creative … or at least slightly different.

Now brief and breezy Kai, with Hawaiian roots and international appeal, is the rising K name to beat.

K is also the letter of classic choices from another era or language, like the Scottish Kenneth or the Persian Kian.

It’s the seventh most popular letter for boy names, behind J, A, L, M, C, and E. That means a big percentage of our sons answer to boy names starting with K.

This name means ocean in Hawaiian. But it coincides with many similar names, including a Knight of the Round Table and the little boy in the original Snow Queen fairy tale.

Irish surname Caden inspired all of the spellings of this name, at least in part. Kayden’s rise owes much to the runaway popularity of Aiden and company, too.

Another possible spelling of this popular name.

Preppy and presidential surname name Carter is sometimes spelled with a K.

Some will see King as regal and grand. Others might think of it as spiritual – a reference to Christ the King – or a hero name, as in Martin Luther King, Jr. Parents’ reasons aside, the baby name King has been a Top 200 staple since 2013.

The phrase Kyrie eleison means Lord have mercy, from the Greek kyrios – lord. That makes Kyrie a name a little bit like King. But it owes much of its popularity to basketball’s Kyrie Irving.

Old Testament Caleb, too, is occasionally spelled with a K.

As in Fort Knox, the home of the US Bullion Repository – where we keep all the gold. Knox simply means “hill,” from an Old English word.

The tragic 2020 death of basketball legend Kobe Bryant sent his name racing up the popularity charts. His name ultimately comes from the Japanese city.

Ken is hanging with Barbie in her Dream House, but Kenneth sounds nicely distinguished. It’s as Scottish as Malcolm, a name popularized by Sir Walter Scott’s 1825 novel The Talisman.

A Kyle-Tyler mash-up, Kyler fits right in with so many surname choices for our sons. Spelling Kylar adds some influence from popular unisex name Skylar.

One more entry in the Kayden/Kaiden contest!

Cash with a K.

Preppy surname Carson looks a little different with a K.

Cain engaged in the original case of sibling rivalry. But Kane is an Irish surname name, straightforward and strong. Spelling Kain is also sometimes seen.

Spelled Cillian in Ireland, the K version is the Anglicized form – and the only one that ranks in the US Top 1000. Sometimes spelled with a C, and other times with a single L: Kilian.

A surname name with multiple origins and meanings, Kade feels like a very twenty-first century name.

A cousin to Kayson.

Add a K to stylish sound Amari, and you’ll arrive at Kamari. The names might come from Ammar, an Arabic name meaning long life.

Another K take on a popular surname-style choice.

Either a Persian name meaning king or a name right out of Irish myth.

A mix of stylish sounds.

Take the Ky- from Kyle and add the popular -son ending.

Another possible spelling for Kason.

Inspired by place name Camden, but spelled with a K.

A Irish surname name, and distant cousin to the wildly popular Aiden.

A Hawaiian name made famous by actor Keanu Reeves.

Another Irish option, Kieran means – roughly – little dark one. Other spellings are possible, like Kyron, but they might stray a little farther from the original.

As a surname, it can refer to a church official or a piece of artillery.

A Japanese import, Kenzo is familiar to many thanks to Japanese designer Kenzo Takada.

Another spin on Kason.

Native American name Koda briefly popped into the US popularity data following the release of 2003’s Brother Bear. It quickly fell out of use, but re-entered the rankings in 2016. This time around, it’s probably more about the sound and our growing love of boy names ending with -a.

A cousin to Kyrie.

This name spiked in the middle of the twentieth century, putting it solidly in dad – and grandpa – name territory right about now. But with impeccable Scottish roots and a bright sound, just give it another forty years and it should be ready for revival.

As in Ben. And Shacklebolt. The first is a celebrated, Oscar-winning actor; the second, a heroine from the Harry Potter world. The name surged in use following Shacklebolt’s first on-screen appearance in 2007, but it fits right in with so many King names we loved for our sons.

From an Arabic name meaning noble, this spelling was made famous by basketball great Kareem Abdul-Jabbar.

A take on controversial surname Cohen.

Khari means king-like in Swahili. And while it looks a lot like the feminine Carrie, it also feels distinctive and masculine.

A German surname name, this spelling owes its popularity to actor Kellan Lutz.

Carson with all the extra frills.

Crew is more popular, but Krew is gaining in use, too.

Another spelling for Case.

Another spelling of surname name Kellan.

Kian with another A.

Christian with a K, and the typical spelling in Scandinavia.

Plenty of European languages spell Christopher (and Christina and Christian) with a K.

The third spelling of Case ranked in the US Top 1000.

A streamlined spelling of Cairo, or maybe a play on the Chi Rho – a Christian symbol for Christ. The spelling might owe a little something to Kylo, too.

Cole with a K.

While Kamryn is sometimes seen as a feminine form of Cameron, it’s used for boys, too.

Caesar started out as a title and became a name. In German, it’s Kaiser – and the Kaiser was the title worn by the Austrian and German emperors during the nineteenth and even twentieth centuries. American parents might think of it more as a type of roll, and an on-trend sound for a child’s name.

A re-spelling of regal – and popular – King.

Kyle with an N.

An accessible Japanese name, one of Kenji’s possible meanings is strong.

Along with Cody, a 90s favorite.

Creative spellings dominate the upper reaches of the Top 1000 list.

Corbin with a K and a y.

Another Irish import, surname name Keenan comes from the saintly Cian. Comedian Keenan Ivory Wayans made it a household name.

It looks a little like Khalil, but it’s actually Kal-El. That’s the birth name of Superman. Nicolas Cage gave the name to a son in 2005, and it’s slowly gained in use over time.

The French form of Killian, one that sidesteps the first syllable of KILLian.

Traditional Calvin with a K.

Long before everyone was naming their sons Charlie, Karl was a favorite among Germans and Scandinavians, probably closer to the original form of the name. It’s strong and a little bit old-school, a reliable choice with history to spare.

The name of a Hawaiian island, and a possible successor to Koa and Kai.

A name meaning cliff, Kaya is traditionally masculine in Turkish, but is more common for girls in the US.

Another Irish surname, possibly meaning battle. Drop the ‘e’ and Kean works, too.

A poetic pick, thanks to English Romantic writer John Keats.

It looks like another spelling for surname name Keane, and it might be. But Keen is also a word name, a modern virtue pick meaning sharp or eager.

An Alaskan place name, Kenai became a sometimes-first following the 2003 animated movie Brother Bear. Kenai is brother to Koda in the film.

An English place name turned surname, Kendall shifted from masculine to feminine following a soap opera character on All My Children. Now, of course, Kardashian family member Kendall Jenner keeps the name in the headlines. But Kendall has a long history of use for both genders, and could easily be considered unisex.

A surname name of uncertain origin, Kendry sounds like a mix between the Ken- names of an earlier era, and surname names parents love now.

A place name with a bright sound, Kincaid is also a Scottish clan.

Kindred is a word name. It can refer to relatives – like the word kin. Or it might mean similar in spirit. Science fiction writer Philip K. Dick’s middle initial stands for Kindred.

Another English place name turned surname, Kipling was also made famous by an author. Rudyard Kipling is remembered for The Jungle Book, The Man Who Would Be King, and Kim.

A Sanskrit name meaning sunbeam, and a very current sound for a child’s name.

An Alaskan place name, Kodiak is also the name of a bear native to the region.

Another take on Christopher and Kristopher, made famous by Frozen’s Kristoff.

This brief German given name is a cousin to Conrad, and was a favorite in the US during the 1960s.

A phonetic spelling of Kaiser.

What are your favorite boy names starting with K? What would you add to this list? 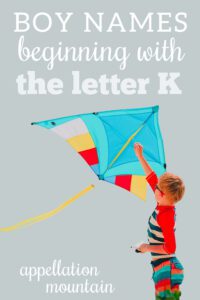 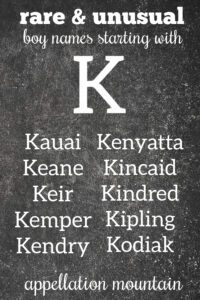