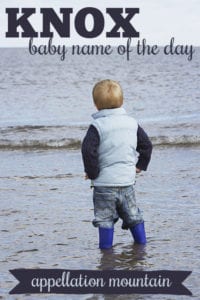 Count Knox among the names launched by the Jolie-Pitt kids.

Our Baby Name of the Day comes from Brad and Angelina’s youngest son.

It filtered into Scottish as the place name Knock. The x-spelling emerged as a surname form.

Sixteenth century Scottish Protestant reformer John Knox is one of the best known bearers of the name, but he’s far from the only one.

In fact, it’s a family name for actor Brad Pitt. His grandfather was Hal Knox Hillhouse – but we’ll get back to that in a minute.

Then there’s Henry Knox, a military officer in the Revolutionary War, and later First Secretary of War.

A fort is named in his honor. You’ve almost certainly heard of it. It’s home to the United States Bullion Depository – gold, heaps of it, all stored in a state-of-the-art vault. Thieves do their best to crack the safe in countless movies, television shows, and cartoons. (And at least sometimes in real life, too.)

The association adds something to the name. There’s a certain Americana vibe, but it also implies something of immense value.

Sometime long after the military commander, but shortly before the Jolie-Pitts, came Dead Poet’s Society. The 1989 movie was a big hit, starring Robin Williams as a teacher at an elite New England boarding school.

The young actors who played the students remain in the spotlight today. There’s Ethan Hawke and Robert Sean Leonard. Fans of The Good Wife may also recognize Josh Charles. He played Knox Overstreet, a budding poet who falls madly in love and (maybe) gets the girl.

There’s a tiny uptick in boys receiving the name post-movie, but it’s still almost unknown straight through the 1990s.

But their youngest son also completes the pattern, a third boy with a given name ending in x.

It’s risen every single year since then, reaching #219 by 2018. That makes it a thoroughly mainstream choice, the kind of name many parents would consider without ever thinking of the Jolie-Pitt kids.

Drop the K, and Nox is the Roman goddess of the night, cousin to Nyx. It’s sometimes used in fiction, especially science fiction, but it remains quite rare.

All of this makes Knox feel like a great compromise choice. It’s modern – really quite new as a given name – but it claims roots stretching back centuries. It blends rugged and preppy vibes nicely. It’s a little bit Americana, but not dramatically so. File this name somewhere between Mason and Max. If you’re after a name that’s not too out there, but doesn’t sound like anything you heard growing up, Knox might be the choice for you.

My guess: this name will continue to catch on, and might just make the US Top 100 in the next few years.

Would you consider this name for a son? Do you think it’s going to continue to rise – and maybe even crack the US Top 100?

First published on July 2, 2012, this post was revised substantially and republished on December 11, 2019. 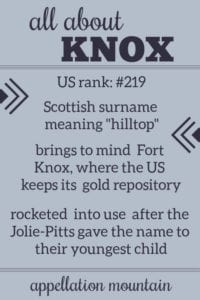