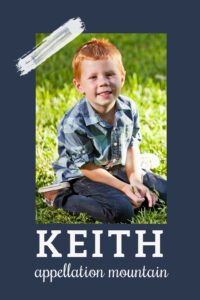 The baby name Keith started out as a distinguished surname, became the boy next door, and then somebody’s dad – or maybe grandpa. But odds are this midcentury staple will come back around again.

Thanks to Fiona for suggesting our Baby Name of the Day.

It wasn’t really knew. Aristocratic surnames have been borrowed as first across the generations. Wallace and Lyle, Douglas and Gordon have all had their moments in the sun.

But Clan Keith is, indeed, a Scottish clan. The chief traditionally holds the title Marischal. They’ve got a great motto, too: Truth prevails.

The name itself comes from a word meaning wood.

It’s said that King Malcolm III of Scotland named the first chief of Clan Keith way back in 1010. The name has been around at least that long.

Plenty of places around the world are also Keith, and there’s a long line of famous figures who answer to the surname.

Any last name will occasionally migrate to the middle and the first spots.

Dozens of others answered to the surname over the years.

It started rising in use as a given name around the year 1900 in the US.

The British might’ve been slightly ahead of Americans.

Born in 1943, the future Rolling Stones guitarist and songwriter has been with the band since he and childhood friend Mick Jagger re-connected at Dartford Railway Station in 1961. (There’s even a plaque.)

By 1962, they were signed to their first recording contract. The rest is history.

Keith Richards isn’t the only famous musician with the name.

The late Keith Moon was the first drummer for another legendary English rock band, The Who.

But Richards occupies a special place. Part of it is the Rolling Stones’ living legend status. But it’s also Richards himself. While many 1960s and 70s-era rock stars are just a fading reference for this generation of parents, that’s not true for the Stones.

After all, the wildly successful Pirates of the Caribbean franchise gave us a Keith Richards-inspired pirate. In a twist, Richards himself eventually made a cameo in the series as Jack Sparrow’s dad.

Around the time John F Kennedy was elected president in 1961, the baby name Keith must’ve been as cool as Kai is today.

After all, it became the name of the cute eldest brother in the fictitious Partridge Family.

The show debuted in 1970. It’s about a family of musical siblings and their talented bank teller mom, Shirley. Thanks to precocious youngest sibling Danny, they end up with a manager and an agreement to go on tour in a school bus. Though often the show took place in the family’s hometown, with jam sessions in the garage.

The show was a hit. And that big brother? Keith Partridge was played by David Cassidy, who became a teen idol.

In other words, Keith Partridge didn’t spark the name’s rise. Instead, it was just the perfect name for a cute boy as the 1960s slipped into the 70s.

That means a wave of established, accomplished men by the name followed by the end of the twentieth century.

Actor John Carradine gave the name Keith to his son in 1949. Keith Carradine became an established actor, from Deadwood to Dexter and dozens of other roles. His career began in the 1970s, when he won an Oscar and Golden Globe for Best Original Song for Nashville’s “I’m Easy.”

Haring’s artwork started out as New York City graffiti, but quickly graduated to galleries. Even if you haven’t seen his work, you’ve seen his influence. Bold graphics, chalk outlines – pop art mixed with social activism. It’s the visual language of the 1980s.

Somewhere post-Haring, the baby name Keith mellowed out into a everyguy kind of name.

There’s Keith Dudemeister on Scrubs. It’s the name of Veronica Mars’ father, a sheriff-turned-private investigator who inspires his daughter’s calling.

And that’s where the baby name Keith remains today.

It’s surprising to hear on a child, a name from another era. We expect Keith to be your uncle, your accountant, the tree surgeon – a responsible grown-up. It’s a midcentury staple that sounds down-to-earth and accessible.

And given the name’s long history and appealing backstory, it’s very possible that we’re just four or five decades away from another wave of baby Keiths.

What do you think of the baby name Keith? 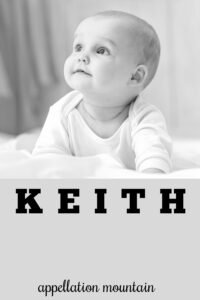