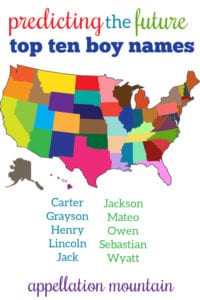 Back in 2016, looking at a stable – or stagnant – Top Ten list, I wondered which names would replace the current favorites as they inevitably fell.

My guesses were based on state data. Why? The data sets are smaller. So I figured it might be easier to spot up-and-coming names by looking at those popularity charts.

I should note that I didn’t expect them to reach the US Top Ten the following year. With the exception of the occasional pop culture-fueled rise (think Miley, Khaleesi, or Logan), most names plod their way up the popularity charts. Sure, a name in the 500s or 600s can easily jump 100 spaces or more in a single year. But once we get into the Top 50? Only a handful of double-digit jumps happen each year.

So let’s review my predictions from back in 2016, and then consider what might the future may hold.

We first heard Grayson beginning in the 1990s. It’s climbed in use slowly, feeling more like an overlooked traditional than a trendy surname pick. I think it would already be closing in on the Top Ten in the US, save for one factor: spelling. As of 2018, Grayson ranked highest – but Greyson also makes the Top 100. Graysen falls in the 700s, and plenty of other variations have been seen.

Another steady climber, Julian epitomizes the boy name trends of our day. It’s longer, softer, and more romantic. But it’s hard to argue that a name associated with Julius Ceasar is anything but masculine. And we’ve long favored J names for boys – James, Joseph, and John are among the most traditional choices in American baby naming history.

I’d call Henry a classic boy name. And yet, classic names trend, too. Names like Peter and Paul are out of favor today, while Theodore and Henry? They feel rock-solid and stylish at the same time. For years, you named your son Henry to project something just a little different. Not quirky, exactly, but also not as predictable as Michael or Christopher. Today, if you wanted to name your son the equivalent of Henry, you’ll have to call him Arthur instead.

It’s been a good era for presidential surnames. Carter and Kennedy have fared well, too. But I don’t think it’s about the men themselves. Instead, it’s a mix of Americana style and the sound of the name itself. Why is Lincoln leading the pack? Perhaps the widely-admired president gets some credit, but I think it’s down to cool nickname Link. It helps this name appeal to parents after something modern, but rooted in history; edgy, but respectable, too.

I think I bet on the wrong Luke name. In 2015, Lucas ranked #16. It’s since reached #8. Luke, on the other hand, has remained flat, moving between #28 and #30. I bet on Luke because I think it sounds a little more modern – a brother for Finn, an alternative to Jack. But, of course, Lucas offers Luke as a built-in nickname, too. And so the slightly more versatile version of the name has carried the day.

Oliver followed Henry’s path – only even faster! It went from traditional-but-offbeat to traditional-and-cool in the space of a dozen years. Credit a few factors: our love of vowel names; Olivia’s rise to the Top Ten in 2001; and the great middle ‘v’ sound. All combined, Oliver made it to the Top Ten in 2017. Proof that the state data can – at least some of the time! – help predict future favorites.

Owen has always been in the US Top 1000, and often in the Top 200. But despite a long history of use, Owen feels more like a modern boy name than a traditional pick. Maybe it’s the energetic O, or the sort, nickname-proof style. It’s currently more popular than ever before, and continues to climb. You can imagine parents loving names like Charles, William, and Owen … or Mason, Knox, and Owen. The names crosses style categories effortlessly.

Samuel ranked in the US Top 20 back in the 1880s. Maybe that’s why it seemed like a lock to return to the top of the charts. Except the name seems to have reached a plateau, right around #20ish. While Sam is terribly appealing, Samuel seems a little less of a crowd-pleaser. Compare that to, say, Gabe and Gabriel, Will and William, or Alex and Alexander. Most Samuels are only ever Sam, and that makes the name a little less flexible. Still, it’s a minor drawback. This name remains traditional, handsome – and outside of the Top Ten, so that might be a bonus.

File Sebastian with Julian. In 1989, Sebastian was the celebrated court composer to King Triton in The Little Mermaid, an animated crab. The name felt dramatic and suited to a singing fantasy. But somehow, that little crab with the big voice pushed the name into the mainstream. It ranks in the US Top 20 for the first time ever, and might just keep on climbing. One factor: Sebastian is powerfully popular with Spanish-speaking parents in the US, making it a crossover favorite along the lines of Isabella or Sofia.

For ages, the only Wyatt was Earp. While his biography was checkered, pop culture immortalized him as a white-hatted lawman. A 1950s television series cemented his image. In 1994, Kevin Costner played a grittier version of the legendary figure, but the movie bombed at the box office. Still, the name slowly gained favor, a sort of rugged-cool choice with history, but modern style. That’s a winning combination, and could take this name even higher.

Of those ten names, one cracked the US Top Ten: Oliver.

Based on the state popularity data, I think six are worth keeping on the list. To those six, I’m adding three that I almost included back in 2016. And one entry here is completely new.

My picks for future Top Ten boy names are as follows:

The trends demonstrate that many of these names are gaining steadily. Parents love them, and they have broad appeal across categories.

Grayson, Henry, Lincoln, Owen, Sebastian, and Wyatt all stay on the list for another round.

Jackson and Mateo struggle with the same issue facing Grayson: there’s more than one obvious way to spell each of these names.

But I think both can overcome the challenge. Mateo might be the next big Spanish-English crossover boy name, one that feels approachable to English speakers, thanks to the long popularity of Matthew. It benefits from our love of o-ending boy names, too.

If multiple spellings were tallied, Jackson would already hold the #1 spot in the US by some calculations. So maybe it’s time that the most popular spelling appears in the Top Ten.

Carter slipped by me in the last analysis. I think I’ve long assumed that Carter had already peaked. But the numbers are a tricky thing. Carter will make the Top Ten if a higher percentage of boys are named Carter – but rank is relative. Sometimes a name can fall in terms of absolute use, but rise in rank. Fewer boys were named Carter in 2018, but it still ranks higher than it did in 2015. So I’m not sure what to expect from this name in the coming years, but it increasingly feels like a modern traditional.

As for Jack? It’s classic and casual, a name that feels cool even when it’s common. Jack has all of the bravado of Maverick, but in a far more traditional name. It’s easy to imagine parents compromising on Jack. Another factor? It’s a chart-topper elsewhere in the English-speaking world, one that American parents seem to be embracing, too.

Those are my picks for future Top Ten boy names. Can you imagine any of these cracking the national Top Ten in the next three to five years? Which names have I omitted that you think belong on the list? 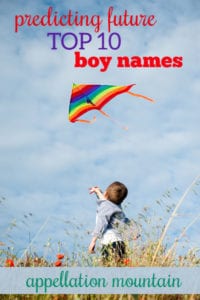 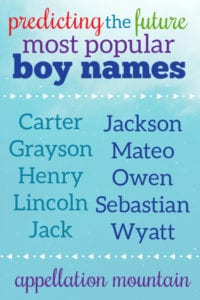