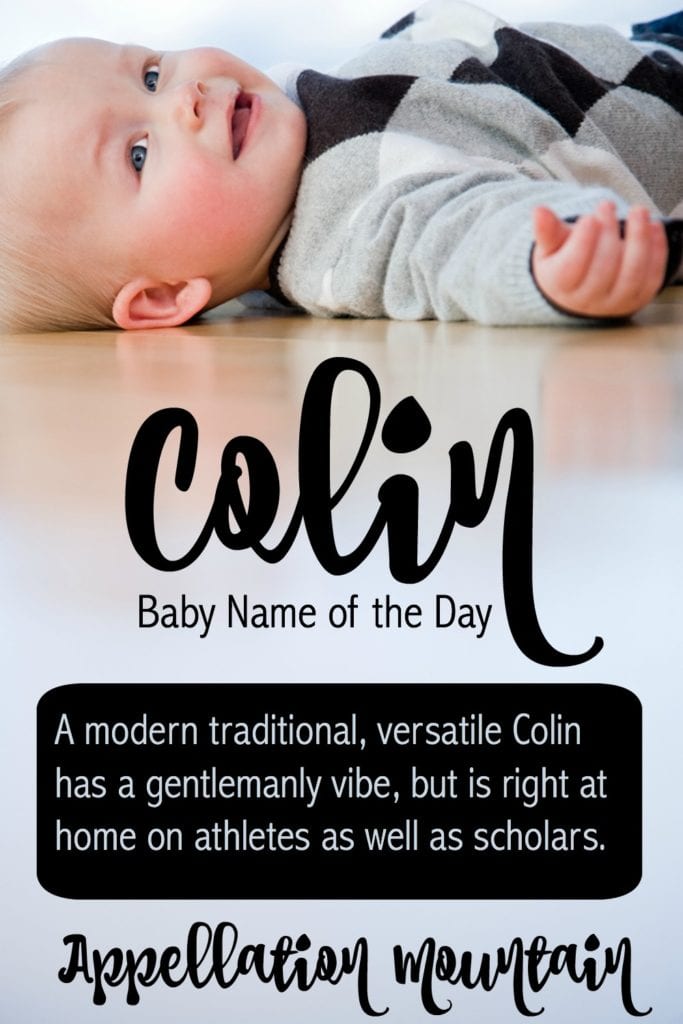 Colin is a staple for boys born in recent decades, a gentlemanly name that feels right at home on a scholar or an athlete.

There are two main origins for this name.

You’ll find the names Cailean used in Scotland and Coilean in Ireland. They both come from the same root, meaning young dog or pup. It’s been Anglicized as Colin for centuries.

Back in the thirteenth century, Cailean Mór Caimbeul was an early leader of Clan Campbell, also known by the Anglicized form of the name. He’s the ancestor of the Earls of Argyll.

Earlier still, there was a King of Scotland named Cuilén mac Ildulb in the 900s. His name, too, is sometimes Anglicized as Colin.

The name also derives from Nicholas. Nicholas shortened to Col or Colle. Add the familiar -in, of Robin and Jankin and many a medieval diminutive, and you have an obvious Nicholas nickname.

Nicholas names are plentiful, of course. Originally Greek, it comes from nike – victory – and laos – people. Saint Nicholas needs no introduction, and the name is well-known in many languages.

Colin: By the Numbers

You could never call this name trendy. It has a long history of sparing use. But it started to take off in the 1980s, reaching the Top 200 – perhaps coincidentally, around the same time Nicholas entered the US Top Twenty.

Alternate spelling Collin peaked in the mid-1990s, and is also fading in use today.

There’s no shortage of famous men by the name. Actors Farrell and Firth come to mind. Tom Hanks gave the name to his look-alike son, who is also now an actor – and a father, too.

Beyond Hollywood, there’s no shortage of familiar bearers of the name.

Frances Hodgson Burnett used it for the young boy in her 1911’s children novel The Secret Garden. The novel is considered a classic, and makes this name as literary as Alice or Peter.

But the one bearer that almost certainly comes to mind is Colin Powell. He pronounces his name with a long ‘o’ sound – COE lin. A retired four-star general in the US Army, Powell served as Secretary of State under President George W. Bush. He was the first African-American to hold the office, and remains widely admired.

The picture that emerges of Colin is that of a New Traditional.

It’s a name that wasn’t common in 1916, but wasn’t completely unknown, either. In 2016, it seems like a steady choice for a boy. Not exciting or trendsetting, but a name that has stood the test of recent generations. It’s a smidge more conventional than Mason, and will feel less dated than Aiden and company.

If you’re after a name that’s rock steady, and on trend without feeling trendy, this name might be for you.

What do you think of Colin? Does it feel dated to you, or do you agree it has a new traditional vibe?