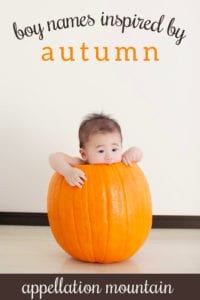 Autumn boy names embody the spirit of the season. They’re outdoorsy and adventurous. And while the forests and the trees aren’t specific to autumn, there’s something about hiking or camping in the fall woods that feels especially right.

For boy names that strike a cozy, capable note, you might be looking for a homespun boy name like Arlo or Emmett.

These names are more on the nose, specifically suggesting all things fall. They’re word names, many of them borrowed from the natural world and the colors that define the months of September, October, and November.

Traditional Adam doesn’t immediately signal autumn. But one of several possible origins for the name is “red earth.” That feels quite appropriate for the season. If you like your autumn boy names subtle and traditional, Adam works.

One of many tree names on this list, Alder’s leaves are spectacular in the autumn.

A color name, as well as a football powerhouse, Auburn sounds like boy names Austin and Ashton and maybe a little like Adam, too.

A tree name, known for its white bark as well as the colors of its leaves in the fall.

A fiery name that could signal the summer heat, or the campfires of fall.

To garner is to gather. That sounds just right for the season of the harvest and Thanksgiving.

A glowing color name that brings to mind the colors of the season.

This surname name refers to a farm steward, one who oversaw a granary or storehouse.

A word name specifically associated with the autumn.

Hawthorn shrubs are known for their red berries, a color that feels at-home in the season.

Nash means “at the ash tree,” a quiet nature name that feels right at home on this list.

A strong and might name, in just three letters.

Octavian means eight, but it brings to mind the month of October.

An upbeat Irish surname with a colorful meaning: red.

Sure, it’s a potato. But it’s also a reddish-brown color.

Rusty comes from the reddish-brown color of rust, and while it’s uncommon now, Rusty ranked in the US Top 1000 for half of the twentieth century.

Rye grass is a cousin to wheat, which makes it sound seasonal. And since we name our sons Ryan and Kai, why not Rye?

A surname that means row of houses by the woods, Woodrow is the given name of actor Woody Harrelson.

What are your favorite autumn boy names? 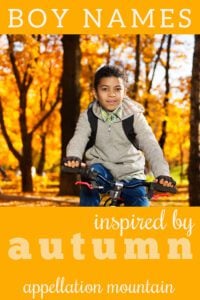 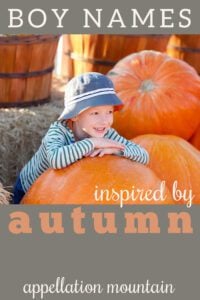