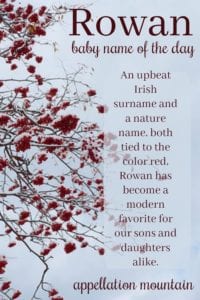 Rowan counts as a nature name and an upbeat Irish surname choice, too.

Like Riley and Kennedy, this one has a long history of use as an Irish surname. The original would’ve been something like Ó Ruadháin, from ruadh – red. The given name Ruadán dates back centuries, too. There’s a Saint Ruadán from the 500s, one of the twelve apostles of Ireland. A minor mythological figure answered to the name, too.

It often became Rooney in English, but Rowan also evolved from Ruadán.

A handful of impressive bearers includes:

Many Americans first heard this as a given name thanks to British comedian Rowan Atkinson, who rose to fame as the bumbling, mostly silent Mr. Bean. He’s had a long career, beginning in the late 1970s.

It appears to have more history as a first name in the UK, though it’s found in small numbers in the US from the early twentieth century onward.

Still, credit almost certainly goes to Atkinson for American parents’ embrace of the name. It gained in use during the 1990s, just as Atkinson’s movie career took off. He had roles in Four Weddings and a Funeral, Never Say Never Again, and The Lion King. (He’s the voice of Zazu.)

Let’s take a minute and go back to the name’s origins. It’s been a tree name for ages, and that’s a huge category. There’s Laurel and Willow, Hazel and Aspen.

Like the surname, the tree’s name comes from the color red, thanks to the color of the berries. Though the tree name is whispered down the alley from Old Norse to English and Scottish before transforming into the same spelling as the surname.

It’s presently among the most popular of nature names for boys.

The trees were considered quite powerful. The wood fends off witches and vampires, protects ships and cattle and houses.  Their berries could help tell the future. When Anne Rice named the supernatural powerhouse at the heart of 1990’s The Witching Hour, she chose Rowan for the most talented of the Mayfair witches.

That almost certainly helped raise interest in the name for girls. It rises steadily for our daughters as well as our sons in 1990s, when Rice’s 1990 novel about New Orleans witches topped the bestseller charts.

The name has continued to gain for girls and boys alike.

One tipping point on the girls’ side: Brooke Shields and husband Chris Henchy welcomed daughter Rowan Francis in May 2003. That year, the name debuted in the girls’ Top 1000.

In other words, I’d call this name truly unisex. It fits with so many two-syllable, ends-in-n favorites for our sons, but it also works well with nature names and color names we favor for our daughters.

What do you think of Rowan? Do you like it better for a son or a daughter?