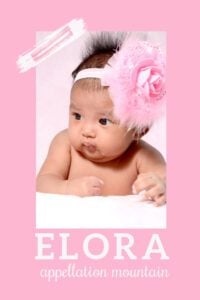 The baby name Elora has crossed oceans and worlds of fantasy to arrive in the US Top 1000.

Thanks to Mollie for suggesting our Baby Name of the Day.

It’s easy to imagine parents arriving at Elora by smooshing together the sounds in Eleanora.

Or maybe by combining sounds from a handful of Hebrew names, with meanings all related to light, like Leora, Liora, and Elior.

Some probably just made it up, cobbling together the enduring El of Elizabeth and Ellen and so many evergreen girl names, with the -ora ending.

After all, five girls were given the baby name Elora way back in 1898. During the same decade, names like Cora, Dora, Nora, and Flora appeared in the US Top 100, with Elnora, Zora, Clora, Eudora, and Isadora among the many other -ora names in use.

But there’s another place parents might’ve heard Elora in the 1890s and early nineteenth century.

Travel to Maharashtra, India, and you can visit Ellora. It’s a series of temples cut into the rock of a large cave complex, one of the biggest of its kind in the world.

Some of the artwork may date to the year 600. It’s certainly well over a millennia old. Towering rock sculptures dedicated to the gods and summarizing famous stories are found there.

In addition to temples devoted to the Hindu, Buddhist, and Jain faiths, monasteries for each group have traditionally flourished in the caves.

It’s a religious site, first and foremost, welcoming the faithful on pilgrimage. But Ellora also sits on a South Asian trade route, bringing merchants through the region.

It’s short for Elloorpuram. Sometimes it’s called Elapura, Elura, or Verul. But while the name is ancient, the meaning is unclear.

FROM INDIA to ONTARIO

Often, when an ancient place name coincides with a given name, it’s down to coincidence.

But there might be something that links the Ellora Caves to the baby name Elora.

The Elora Gorge sits in Ontario, north of Guelph. The Grand River flows through it, complete with water falls and a swimming hole in an old limestone quarry. The movie version of Stephen King’s It, as well as the sequel, featured the location.

The community takes it name from the caves. How? Back in 1832, Captain William Gilkison founded the town. Scottish by birth, he’d been a British officer stationed in India and later fought in the War of 1812.

Gilkison purchased 14,000 acres of land along the Grand River, opening up businesses in what was then called Irvine. But he opted to change the name, instead, to Elora, inspired by the name of his brother’s ship. The ship, in turn, was named for the caves.

Even in a moment when few Americans traveled the world, accounts of others’ journeys in newspapers and travelogues, brought foreign place names home. It’s possible that some of those nineteenth century girls named Ellora and Elora were inspired by the caves, too.

No question, though, that the baby name Elora owes its use to Willow.

The 1988 movie introduced the world to Elora Danan.

Ron Howard directed the George Lucas fantasy film. Warwick Davis plays Willow, a farmer who ends up on a quest, protecting an innocent baby from an evil queen.

Because that innocent baby? The survival of the entire world depends on her.

A rag tag band of supporters forms, and against all odds, they save the day.

The movie wasn’t exactly a hit when it was first released. Critics weren’t sure what to make of it. But it received two Academy Award nominations, performed well internationally, and slowly became a cult classic. Chances are that – even if you haven’t seen the movie beginning to end – Willow seems familiar.

A television series based on the film is expected to premiere on Disney+ in 2022. This new Willow will surely introduce the name to a whole new generation of parents. But this time, it won’t feel completely new.

There’s also an Elora on Reservation Dogs, the FX/Hulu comedy about a group of teenagers growing up on an Oklahoma reservation. The kids are intent on moving to California. It succeeds on its own merits, but it’s also noteworthy as the first television series featuring all indigenous writers and directors, as well as a mostly-indigenous cast.

Elora is played by Kawennáhere Devery Jacobs, and the character’s name is clearly a reference to Willow.

The series marks yet another place for parents to hear the name.

It tracks with a generation of Willow fans growing up.

And, just as in the late nineteenth century, it also marks a moment where we love -ora names, with Aurora, Cora, and Nora all popular.

But it’s also an otherworldly name, one connected with a deeply spiritual and famous location, as well as a fictional figure from a fantasy quest.

The combination appeals, making the name familiar and accessible, but undeniably different, too.

What do you think of the baby name Elora? 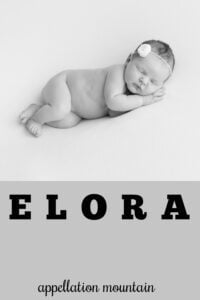