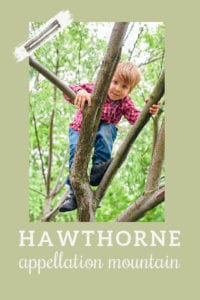 Thanks to Evangeline for suggesting our Baby Name of the Day.

In many ways, this is a straight-up nature name, borrowed from a shrub. When planted close together, they create hedges.

In Old English haga meant hedge, and the thorn is obvious – they’ve got ’em. For centuries, landowners planted hawthorns as living fences.

We use the plant for firewood. The berries give us wine, syrup, and jam, too.

The associations with the plant are many, and several lend themselves to considering the baby name Hawhtorn.

Because it blooms in late April, we called it mayblossom or maythorn. May Day celebrations also utilized the plant. The association with spring makes it a symbol of hope.

It’s touted as a remedy for heartbreak. In ancient Greece, hawthorn was associated with love and marriage.

Some contend that Jesus’ crown of thorns was hawthorn. We speculate that hawthorn provided the staff of Saint Joseph, too. Maybe, but we don’t know for certain.

We do know that the wood surfaces in legends. It’s associated with fairies and holy wells, and hawthorn stakes are excellent for killing vampires. Or so says the internet.

FROM PLANT TO NAME

Just like many nature names, odds are that Hawthorn became a surname because someone lived near a particularly notable hawthorn hedge.

The baby name Hawthorne comes from the surname.

But let’s talk about the most notable Hawthorne of them all.

Nathaniel was descended from John Hathorne, an interrogator of the Salem Witch Trials. Or so we assume; he never explained why he added the ‘w’ to his name.

His writings – the dark Scarlet Letter, the haunting House of the Seven Gables – are considered masterworks of American literature. They remain widely read today.

And so Hawthorne feels like the dominant spelling – and a literary baby name, too.

TNT and THE HUNGER GAMES

A short-lived TNT medical drama starring Jada Pinkett Smith was titled Hawthorne. You might think of The Hunger Games’ Gale Hawthrone, best friend to Katniss and a possible love interest.

Whether it’s the YA series or our love of nature names, the baby name Hawthorne has risen in use.

That suggests that our love of nature names is driving the baby name Hawthorne’s popularity increase.

Despite the baby name Hawthorne’s gentle nature name vibe, it comes with some dramatic, even aggressive nickname options. Thorn and Thor are two; Hawk might also work.

But overall, the baby name Hawthorne requires no nickname. It’s a polished nature name, a literary choice with roots in the seasons. It would wear well for a son today.

What do you think of the baby name Hawthorne?