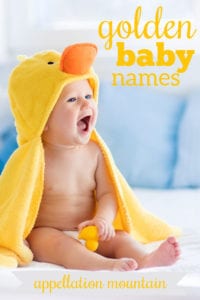 Golden baby names shimmer. They might feel bold, maybe even a bit flashy. But all of that glitz comes with plenty of meaning, too.

After all, Robert Frost’s “Nothing Gold Can Stay” is a poem about the inevitability of change; it’s quoted in classic young adult novel The Outsiders, when Johnny tells Ponyboy to “stay gold.” Gold symbolizes innocence and goodness. “Good as gold” suggests authenticity.

It’s the metal used for crafting wedding bands and religious objects. Gold medals go to first-place winners. And, of course, the golden sun shines on us all.

The combination of meanings feels inspiring. Like Laurel or Ivy, it bridges the natural world and achievement.

No surprise golden baby names could represent the most stylish of colors.

The Latin aureus means golden. Marcus Aurelius reigned as Roman emperor in the second century; the family name comes directly from the word. Saints answered to Aurelius and Aurelian over the years. But I think it’s the feminine form, Aurelia, that shows the most promise today. It returned to the US Top 1000 in 2012. It’s heard across Europe, which lends it a certain sophistication. 2003 hit movie Love Actually gave the name to Colin Firth’s Italian love interest. If you’re crushed that subtly shades-of-green Olivia is so very popular, I think quietly golden Aurelia makes the perfect compromise.

Another name borrowed from antiquity, Flavia comes from the Latin word flavus – usually interpreted as yellow, but translated as golden, too. Family name Flavius connects to a handful of Roman emperors, including Constantine the Great, or Imperator Flavius Valerius Aurelius Costantinus Augustus. (How’s that for grand?) Fans of mystery novels might think of Flavia de Luce, the school-aged sleuth in Alan Bradley’s series. While Flavia has appeared in the US Top 1000 just a few times in the nineteenth century, it’s a great choice for parents in love with middle-v names for girls, but hoping for something rare.

Golda comes directly from the Yiddish word gold, which makes sense. It’s really just gold-with-an-a. In 1964, we met Tevye and five daughters in Broadway’s Fiddler on the Roof – oh, and Tevye’s wife, Golde, pronounced like Golda. The name didn’t rise in use, though; in fact, Golda had previously appeared in the US Top 1000 from the late 1800s right into the 1930s. In 1969, Israeli politician Golda Meir was elected prime minister. She’s arguably better known than the fictional character, but neither is especially familiar to families today. Still, I think Golda works for parents after something determinedly throwback and completely unexpected.

If Golda speaks to the old world and an era gone by, Golden is pure twenty-first century. Actor Golden Brooks gives this one to the girls; she’s probably best known as Maya on long-running BET sitcom Girlfriends. But it’s been used in almost equal numbers for boys and girls over the years. Which reminds me: while I say style makes this a very current choice, it actually peaked in use way back in 1919. Depending on your age, you might think of On Golden Pond, a 1979 play turned hit 1981 movie. And, of course, there are golden tickets to Willy Wonka’s factory, and Harry Potter’s golden snitch.

Goldie sounds retro, a sparky name in the key of Sadie or Millie. Goldilocks makes it a fairytale adventure name – though not exactly a heroic one. Goldie Hawn makes it Hollywood royalty. (And yes, that is Hawn’s real name.) Actor Ione Skye has a Goldie Priya; more recently, Carson Daly and Siri Pinter named their fourth child Goldie. (She joined brother Jackson and sisters Etta and London.) While it still has a long way to go to return to its peak popularity circa 1915, Goldie has been gaining modestly in use over the last few years. It’s a shining name with energy to spare.

Laurelin sounds like a smoosh of Laura and Lynn, or possibly nature name Laurel and Lynn. Neither of those names have anything to do with gold. But Laurelin actually comes to us via JRR Tolkien’s Sindarin, one of his invented languages for his elaborate fantasy worlds. It refers to a tree, the Tree of Gold, but translates roughly to “song of gold.” I’d call it an under-the-radar option if you love the idea of golden baby names, but fret that Goldie comes with too much glitter. Just six girls were named Laurelin in 2019 – it’s quite rare, though it’s been used in small numbers since the 1970s.

One of several rare flower names that’s attracting attention lately, Marigold feels both traditional and unexpected. Downton Abbey gave the name to Edith’s young daughter, putting it on parents’ radar. The flower name comes from the phrase Mary’s Gold – as in the religious figure. But the flowers are indeed brightly golden, a sunshiny hue. At least much of the time – depending on the variety, they also come in orange, maroon and other shades. Marigolds are favored for use at weddings in India, where they’re fashioned into garlands. They’re thought to represent the sun, and a prosperous future for the newlyweds.

Medieval legend gives us an Oriana, a princess beloved of the knight Amadis. The Spanish story makes Oriana heir to the throne of Britain. The name was later used to refer to Queen Elizabeth I, as in a collection of songs known as The Triumphs of Oriana, published in 1601. The name almost certainly comes from oro – the Spanish word for gold, ultimately from the Latin aurum. It’s glittering and golden, and unlike many of the choices on this list, Oriana feels subtle. It’s also very close to current chart-topper Ariana. Whether that’s a plus or a minus is up to you.

Don’t you love a great Irish name? Órfhlaith comes straight out of legend and lore, a sister for Brian Boru. While it looks complicated, Órfhlaith is pronounced Orla – hence, the phonetic spelling used here. Orlagh is also seen, especially in Ireland. It comes from the Irish words for gold and princess, making this short and simple name quite grand. You might be familiar with designer Orla Kiely, known for her bold and expressive prints. It fits in nicely with names like Isla and Nora, but feels distinctively different, too. There’s an Orla Quirke mentioned briefly in the Harry Potter books, which sounds just about perfect.

This name brings to mind popcorn (thank you, Orville Redenbacher) and flight (thanks to the younger of the pioneering Wright brothers.) Eighteenth century author Fanny Burney coined it, possibly from or, meaning gold, and ville, meaning city. It’s the name of the good guy in her first novel, Evelina. While Burney isn’t a household name today, she was a trailblazer. In her day, young ladies didn’t read popular novels – much less write them. Burney was also a name fan, using dramatic and invented choices for many of her characters. Orville had a good run in the late 1800s through the 1920s in the US.

Paz is the Spanish word for peace, but it’s also the Hebrew word for gold. Combined it’s quite powerful, a mix of the spiritual and the aspirational. Spanish actor Paz Vega makes us think of the first association; she’s actually Maria Paz. The double name honors the Virgin Mary, Our Lady of Peace in English. Nobel Prize-winning poet Octavio Paz comes to mind, too. That’s quite a lot of meaning to pack into a mere three letters. In Hebrew, the elaboration Pazit is also sometimes heard, but doesn’t feel terribly accessible in American English. Pazia is another, more wearable, spin.

When we talk about Rose names, we often mean familiar choices like Rosalie, or recognizable but rare ones like Rosalind. And then there’s Rosaura. It comes from rosa combined with aurea – the Latin words for rose and gold. In 1635, Pedro Calderón de la Barca gave the name to a chararcter in Life Is a Dream. Many centuries later, one of the sisters in Like Water for Chocolate also answered to Rosaura. Lovely and literary, this name has been heard in small numbers for girls since the early twentieth century. It’s an appealing mix of the botanical and the colorful.

Sage is stylish, and so is Rosemary. Could golden Saffron be the next girl name to leap from the spice cabinet to the nursery? British actor Saffron Burrows, who played Cynthia on Mozart in the Jungle, comes to mind. So does the wise-beyond-her-years daughter on long-running Britcom Absolutely Fabulous. Famous Saffrons haven’t been enough to push this name into the spotlight, but with a tailored sound and a golden glow, it might catch on yet. Saffron is particularly associated with the flag of India. And if you know your 1960s pop songs, Donovan’s “Mellow Yellow” starts with the line, “I’m just mad about Saffron.”

Zahava sounds glittering and exotic. It comes a Hebrew word meaning gold. It’s sometimes spelled with an e: Zehava. The Z and the v combination brings to mind other names with high Scrabble value letters. Think Olivia and Everly, Zora and Zoey. But Zahava outscores them all, while remaining straightforward to spell and pronounce. It could appeal to parents after something elaborate, feminine, and different. It’s been used in small numbers for girls in the US ever since the 1970s, but remains rare.

So many golden baby names! Are there any that you would consider for a child? What would you add to the list? 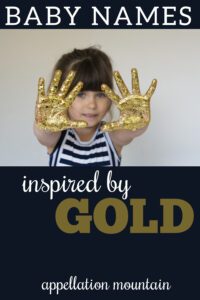 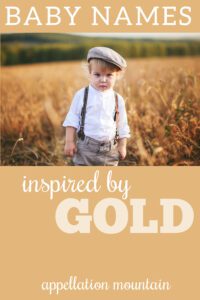