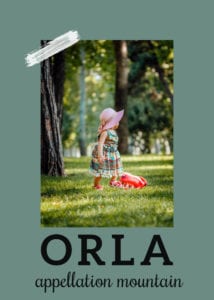 The baby name Orla comes with a meaning that seems too good to be true: golden princess.

Except it really does carry that spectacular meaning! It comes from the Irish or – gold – combined with flaith – princess.

Break out the tiaras!

Orla is the Anglicized form of Órfhlaith. Brian Boru reigned as High King of Ireland around the year 1000. His sister answered to Órfhlaith. So did others in the ruling families of Ireland over the next several centuries.

Regardless of spelling, the pronunciation is always OR lah.

Nearly every famous Orla is Irish. There’s a BBC correspondent and a member the Celtic Woman ensemble.

Then there’s designer of everything colorful from sweaters to coffee mugs Orla Kiely. Visit her flagship store the next time you’re in Covent Garden, or shop her collection at your local Target. She’s sometimes called “the Queen of Prints.”

Kiely’s design empire probably helps raise the name’s profile in the US, and also lends it a creative vibe.

Orla Quirke is briefly mentioned in the Harry Potter series, one of many fabulously-named Hogwarts students. (She’s sorted into Ravenclaw.)

British reality show alum Danielle Armstrong, of The Only Way is Essex fame, named her daughter Orla Mae in 2020.

If you’re looking in the data, you’ll note that Orla sometimes charted in the Top 1000 for boys during the late nineteenth century.

Nineteenth century Danish statesman Orla Lehmann might explain the use of Orla for boys. A reformer who helped establish the parliamentary system in Denmark, he may have inspired parents to choose the name for their sons.

Since then, it’s been exclusively feminine in the US and throughout the English-speaking world.

Overall, Orla feels like a rare, but wearable, name for a daughter.

It’s more accessible that rising Irish favorites like Saoirse and Caoimhe. After all, even if you’ve never seen the name before, the baby name Orla is easily pronounced and spelled.

It’s a little sharper than flowing, liquid names like Mia and Ella. But that makes the name a distinctive, memorable choice.

As of 2018, just 29 girls were named Orla in the US. That makes it surprisingly uncommon, a perfect Irish heritage choice for families after something different, but still straightforward.

What do you think of the baby name Orla? Would you consider it for a daughter?