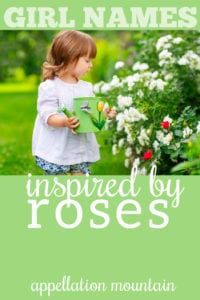 Rose names range from the spare and elegant Rose, a classic with history galore, to elaborate and fanciful confections, from Harry Potter’s Rosmerta to Hunger Games’ Primrose.

Of course, Rose reigns as the middle name of the moment. From celebrities to the family next door, plenty of parents have embraced it as a go-to middle.

But not so long ago, Rose stood proud as a first name favorite. A century ago, it regularly ranked in the US Top 20. Up until 1960, it appeared in the Top 100. As of 2020, the name had climbed to a respectable #113. But there’s still plenty of room for this lovely botanical choice to grow – and bring lots of other Rose names along for the ride.

In the botanical world, roses abound – there are well over 100 varieties. Rose names are equally plentiful, with at least two dozen possibilities. Some feel timeless; others lean literary; but every one of these Rose names has potential for a daughter born today.

Rose – The timeless original. Like Jane or Grace, it’s a single-syllable choice that feels feminine, traditional, elegant, and strong. Equally suitable for a ballerina or a district attorney, Rose seems open to reinvention, a name that can suit nearly any child, and grow with any woman. With so many girls named Ava Rose, Mia Rose, and Olivia Rose these days, it’s often heard – though not often enough as a given name. Rose ranked #113 in 2020.

Rosa – The Latin version of the classic, Rosa seems at home in the Spanish- and Italian-speaking worlds, but it’s also heard throughout Europe. Civil rights icon Rosa Parks makes it a hero name. At #639 in 2020, it’s uncommon – but plenty familiar.

Rosanna – A Rose-Anna mash-up, Rosanna was the title of a smash hit song for Toto back in 1982. Not surprisingly, the name peaked in the 80s, too. Today it’s outside of the US Top 1000, along with Roseanna and Roseanne, as in Barr. That last one is almost certainly going to hibernate for a while. But Rosanna feels every bit as romantic and traditional as Isabella or Olivia. Besides Rosie, there’s also spunky nickname option Roxy.

Rosemary – Hamlet’s Ophelia told us that Rosemary is for remembrance. It’s a softly vintage name, both a Rose-Mary smoosh and a borrowing from the herb, which was named from the Latin rosmarinus – dew of the sea. Plenty of songs feature the name. (This is my personal favorite, from Interpol in 2005. Yes, it’s about a twisted serial killer, but I’ve managed to mostly overlook that tiny hiccup.) Romy is the German nickname, a fresh and vivacious spin on a gentle antique. As of 2020, Rosemary ranked #445. Rosemarie is another, similar option.

Rosamond, Rosamund – In use since at least the 12th century, and probably a few hundred years prior, this name has more in common with the equestrian-tinged Rosalind than the botanical Roses. Still, it’s tempting to translate this as “rose of the world” – in fact, the 12th century mistress of England’s King Henry II was named Rosamund Clifford and nicknamed precisely that. These Roses last appeared in the US Top 1000 in the 1930s, making them true throwbacks.

Rosalba – Used mainly in Italian, this one means “white rose.” It has the romantic feel of Arabella, but remains far less expected. The name has never cracked the US Top 1000, and doesn’t seem especially common in Italy today, either. I’ve also found Rosalva listed on Spanish language name sites.

Rosaura – A combination of Rose and the Latin word for golden, Rosaura was first used in a seventeenth century Spanish novel.

Rosario, Rosaria – The term “rosary” literally translates to rose garden, but refers to a Catholic devotional prayer practice counted out on beads. Rosario is feminine in Spanish and masculine in Italian; Rosaria is the Italian feminine. Despite the success of actress Rosario Dawson and the lively sound of this name, neither version has recently charted in the US Top 1000.

Rosetta – An Italian pet form of Rose, Rosetta is often followed by Stone – the ancient stele that provided the key to reading Egyptian hieroglyphics, as well as a widely-known language learning program. It was discovered in 1799 by the French, who had conquered Egypt under Napoleon the year before. The port city was called Rashid, but the French referred to it as Rosetta. It’s been out of the Top 1000 since the 1970s, but never say never to a comeback.

Rosetti – A surname inspired by Rosetta that takes Rose names in the general direction of Harper and Avery. Poet Christina Rosetti makes this feel particularly wearable.

Roswitha – Not a Rose name at all, but a Germanic name that starts with the right sound.

Róisín – Pronounced ro sheen, this Irish name means “little rose.” Róis – rosh – is the literal translation for the flower. With authentically Gaelic names like Niamh and Saoirse on more parents’ shortlists, maybe Roisin’s moment is coming. So far, it’s never made the US Top 1000. A bonus? The name has patriotic and poetic associations, making it a worthy Irish heritage pick. It’s sometimes translated Rosaleen, which feels like it’s waiting with Darlene and Arlene for a future wave of revival.

Rosalie – In the 1920s, Rosalie was a princess in disguise in a Gershwin musical.  In 1937, the musical became a movie and propelled Rosalie into the US Top 100.  After several years out of favor, Rosalie is back again, thanks to another story adapted for the big screen – she’s Bella’s vampire sister-in-law in the Twilight franchise. Today the name stands at #198, a stylish sound that feels vintage and modern at once. (We do love a good three-syllable, ends-in-y name for a girl, don’t we? There’s also Rosalia, an ancient festival and the name of a twelfth century saint. But it’s Rosalie that clearly comes out on top today.

Rosalind – Shakespeare used Rosalind for a character in As You Like It. Romeo‘s love interest before he met his Juliet answered to the similar Rosaline. Besides Rosie, Rosalind offers the nickname option Lindy, and might be a graceful way to honor women named Rose and Linda. It’s tempting to translate Rosalind as “beautiful rose,” but it comes from Germanic elements for horse – hros and soft – linde – meaning that the name suggests a biddable horse. Last big in the 1940s, Rosalind remains outside of the current Top 1000.

Rosmerta – The Harry Potter name was borrowed from an ancient fertility goddess. JK Rowling made her the proprietress of The Three Broomsticks, Hogsmeade’s favorite watering hole.

Primrose – Without the heroic Everdeen sister of Hunger Games fame, Primrose might feel too prim for a real girl. But the character transforms it from a botanical rarity to a more mainstream botanical option. It continues to gain steadily since the movie came out in 2012, though it’s yet to arrive in the Top 1000.

Rosalina, Rosalita – Add -lina and -lita to Rosa, and you’ll have lovely elaborations of the original.

Rosalynn, Rosalyn, Roslyn, Roselyn: These might be a spin on Rosalind, or maybe they’re a Rose-Lynn smoosh. With Evelyn rising fast, these Rose names feel like options, too. One note: you might hear some of these pronounced Roz-lyn. In fact, Rosslyn, Virginia is part of metropolitan Washington DC. None of these choices made the Top 1000 in 2007, but as of 2020, Roselyn ranks #723 and Rosalyn #843.

Rosina, Rosena, Rosella, Roselle, Rosalita: Like Rosetta, these all started out as pet forms of Rose and Rosa, elaborations sometimes used as given names. Rosina appears in the Rossini opera The Barber of Seville. Bruce Springsteen scored a hit with Rosalita in 1973. While none of them are trending, any of them might wear well today.

Rosabel, Rosabelle, Rosabella: Heard in romance languages, but nearly unknown in English, these are -bel names that fit right in with Annabelle and friends, but remain far less familiar. None of them appear in the current Top 1000.

Anna Rose, Mary Rose, Ella Rose – You might smoosh these together into Annarose, Maryrose, or Ellarose. (I think Ellarose works especially well.) But they work as double names, too, and that makes it tough to tell how common they’ve been over the years.

There you have it – plenty of reasons to rescue Rose from the middle spot and promote it to first.

Have I missed any Rose names? What are your favorites? 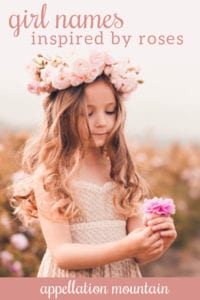 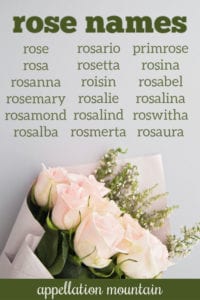