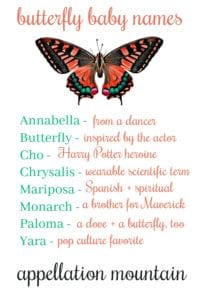 Could butterfly baby names be the next wave in nature name possibilities? With choices like Rowan and River, Willow and Autumn so popular today, it’s easy to see parents moving on to all things lepidopteran.

While having butterflies in your stomach signals nervousness, almost all the associations with the beautiful bugs are positive. Many cultures consider them symbols of the soul; and their transformation from drab little caterpillar to glorious winged creature can be read as a story of rebirth – religious or secular. You’ll find dozens of inspirational quotes that go something like this: Just when the caterpillar thought the world was over, it turned into a butterfly.

Still, finding these names proves challenging. Many of the most wearable possibilities don’t scream butterfly, which might make these less appealing for parents looking for a clear link. Considerable problems attach to the many Native American names that might carry the meaning. Others refer to something else, like the Italian farfalla. Even if you like the sound, in the US, that’s just pasta.

Butterfly baby names are on our radar in 2018, because it was widely rumored that the youngest Kar-Jenner would name her daughter something butterfly-inspired. (Instead, she’s Stormi.)

What sparked the story? The people of the internet noticed that Kylie was sporting butterfly jewelry, including a gift from boyfriend Travis Scott. Butterflies also featured in her nursery decor, the matching tattoos the couple got, and a song the new father released a song titled “The Butterfly Effect” last year.

Let’s say you love the symbolism attached to butterfly, or you just appreciate their beauty. Dozens upon dozens of personal names also apply to butterflies. Most of them are for girls, but options abound for boys, too.

Some of my favorites? Cressida, Heraclea, Atalanta, Lucinda, and Thisbe. For boys, Cassius, Leander, and Orion all work. But even Top 100 names make the list. Henry and Anna are butterfly baby names, too. Find even more options from this exhaustive list at British Baby Names.

Let’s start with a still-subtle choice: Annabella. Vanessa annabella is the scientific name for the West Coast lady, one of the “painted ladies” that we all think of when we picture a butterfly.

But here’s the fun angle: Annabelle Moore, born Annabella Whitford, starred as the original Gibson Girl in the 1907 Ziegfield Follies. She also starred in several early silent films. In one, she performs the Annabelle Butterfly Dance, complete with wings attached to her back. That makes this name vintage, artistic, and doubly tied to the creatures.

Or maybe you like the idea of naming your daughter just Butterfly. She wouldn’t be the first.

Dancer-turned-actor Butterfly McQueen was born Thelma, and acquired her nickname after dancing the role of the butterfly in A Midsummer Night’s Dream. It stuck, and she later legally adopted it. Her most famous role came in 1939’s Gone With the Wind, but she appeared on stage, screen, and television for decades. In several cases, the played characters also named Butterfly.

Despite her high profile, only a very small number of girls have ever been given the name. Still, if kids are called Fox and Wren, why not Butterfly?

From Hollywood to Harry Potter. If you’ve read the books or watched the movies, you’ve heard of Cho Chang. She’s a fellow Quidditch player and Harry’s crush. Because all Harry Potter character names have been obsessively dissected, we know that while Cho means butterfly in Japanese – at least some times – her name is often translated differently in international versions of the books, to a word that means autumn. And the phrase “chou chang” means melancholy – which seems quite right for the character.

If not for the Wizarding World, I doubt this name would be on our radar. But with Luna a break-out hit from the books, maybe – just maybe – Cho could be next.

Among the most-rumored butterfly baby names Kylie was considering? Chrysalis, a nod to her mom, Kris Jenner.

It’s a fascinating word, referring to the mid-point of a butterfly’s life cycle, smack between larval and adult. It comes from the Greek word chrysos – gold, because of the color of the hard shell that protects them during this stage of development.

It’s been used as the name of a minor DC Comics character and a My Little Pony villain, but it’s unknown as a child’s given name. Still, it sounds like it would work, a modern spin on all of the Christine/Kristen/Crystals of an earlier generation.

The hottest Kylie baby name rumor was Mariposa, nickname Posie. She didn’t go that direction – but someone absolutely should!

Mariposa is the Spanish word for a butterfly, and it has the most fascinating origin. The Spanish phrase “María pósate” means “Mary, alight.” That makes this modern nature name quite religious.

It’s a place name, heard in other uses, too. But it’s not unknown as a given name. Fourteen girls received the name in 2016, and twenty in 2020. A 2008 Barbie video was titled “Mariposa and her Butterfly Fairy Friends.”

This is one to watch in the next few years, perhaps the most promising of the butterfly baby names.

Close your eyes and picture a butterfly, and it’s probably a Monarch. Their black, orange, and white wings are familiar to many in North America. It’s said the name came from King William III of England – William of Orange.

As a name, Monarch seems outlandish. Except this is the age of Maverick and Reign, Princess and King. Monarch is nearly unknown as a child’s name – there have never been even five kids given the name in a single year – but it doesn’t seem unthinkable, either.

I know what you’re thinking. Paloma means dove, not butterfly. True – except that in some Spanish dialects, Paloma also refers to a butterfly.

Either way, this is a name with wings.

Like many short names, Yara claims multiple possible origins from across the world. It’s a goddess name in Brazil, a surname in Japan. Change the spelling slightly, and even more possibilities emerge. But Yara makes this list because it appears to mean small butterfly in Arabic.

Of course, it’s also a character on HBO’s Game of Thrones. (In the books, Yara’s name is Asha.) And ABC hit sitcom Black-ish stars Yara Shahidi as Zoey.

What are your favorite butterfly baby names? Are there any I missed? 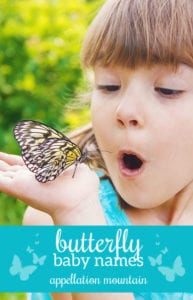 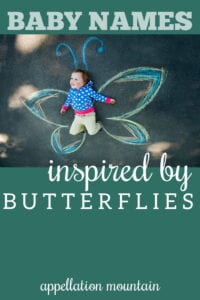