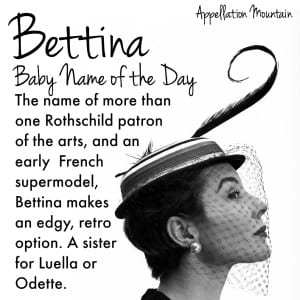 Names evolve in the most interesting ways. We shorten them, lengthen the shortened form, and then change them some more.

Thanks to Sarah for suggesting the much-morphed Bettina as our Baby Name of the Day.

At three syllables, Bettina doesn’t seem like the short form of a longer name.

You might guess the first: Elizabeth or Elisabeth. Bettina is usually listed as a German form. Since we’re used to thinking of Betsy, Betty, and Bette as diminutives for Elizabeth, it doesn’t feel like a stretch.

Then there’s the Italian Benedetta, a feminine form of Benedict. Again, it’s easy to imagine Betty emerging as a short form, so why not Bettina?

Despite these connections to more formal names, Bettina is much more likely to be given as an independent name than a nickname, at least in English-speaking countries.

Plenty of women who have answered to the name:

Born Elisabeth Catharina Ludovica Magdalena, the Countess of Arnim became a writer, artist, and social activist during the nineteenth century. Her circle of friends included Beethoven and Goethe, as well as other creatives. They called her Bettina.

In 1847, a group of German immigrants came to Texas and founded a utopian community named in honor of the Countess. The settlement of Bettina didn’t last, but it’s a quirky, optimistic footnote for the name.

Then there are the Rothschilds, billionaire bankers and generous philanthropists.

The current generation includes Nina Burr – born Bettina. Her mother was Bettina Rothschild Looram, and her grandparents were the Baron and Baroness Alphonse and Clarice de Rothschild, originally from Vienna.

Their family tree also includes Bettina Caroline de Rothschild, born in 1858 in Paris. She was part of the French branch of the family, and married an Austrian cousin. She may have been named after her grandmother, Betty.

Several of the Bettinas have been big in the world of the arts, beginning with Betty, and including Nina, a trustee of the Museum of Fine Arts, Boston, responsible for a large bequest from the Rothschild family’s collection of jewels and artwork to the museum’s permanent exhibits.

In recent years, Bettina has faded steadily. Just 11 girls were given the name in 2014.

And yet, names like Luella and Odette feature on hipster baby lists. Bettina feels like the kind of obscurity that could be so uncool that’s it becomes cool once more.

If you’re after a sassy, retro rarity with ties to the world of fashion and art, Bettina is an option to consider.

What do you think of Bettina? Is this name a retro revival possibility, or stuck in style limbo?