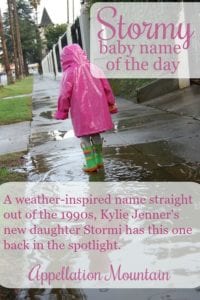 Stormy joins the Kardashian-Jenner reality television show family – only spelled with an ‘i’ instead of a ‘y’.

Could our celebrity-inspired Baby Name of the Day point to a new trend?

Let’s start with just storm. It comes from an Old English word to refer to a violent weather event – strong winds, thunder and lightning, buckets of rain. Maybe hail or even heavy snow.

But it’s referred to non-meteorological events for centuries, too. By the 1600s, you might storm the castle. We’ve only been enthusiastically talking up a storm (and so on) since the middle of the twentieth century.

We’ve had stormy seas and weather since the 1300s, and the word has been used in a figurative sense nearly as long.

So how did this become a given name?

Like so many rarities, we have to begin at the ending. Storm was sometimes given as a surname, either to a child born in bad weather, or for someone known for his bluster.

But in the 1940s, Storm and Stormy started to appear in very small numbers in the Social Security Administration data, for boys and girls.

Perhaps credit goes to the 1935 movie Stormy, where the name was worn by a boy searching for a lost horse. The actor who played him – Noah Beery Jr. – had a long career, from Westerns in the 1930s into the 1960s to a role as James Garner’s dad on The Rockford Files in the 1970s. So maybe that was enough to put the name on parents’ radar.

Or maybe it’s thanks to Major League Baseball’s Roy “Stormy” Weatherly, who played from 1936 into 1950.

In 1933, Lena Horne recorded the enduring single “Stormy Weather.” It’s been covered countless times, a torch song for the brokenhearted.

The lyrics refer to bad weather – “it’s raining all of the time” – and to the singer’s mood. But it’s never used as a given name. There’s no bump in use as a name, either, so that doesn’t seem to explain it.

But in 1943, 20th Century Fox took inspiration from the song title and produced a major, musical motion picture by the name, with the song featured prominently.  Lena Horne performs the song, but her character’s name? Selina.

Still, the timing might explain some of the early use of Stormy.

In 1967, The Association scored a hit with “Windy,” a single about a girl with “stormy eyes that flash at the sound of lies.”

A year later, Classics IV released a single called “Stormy.” Once again, the weather term is clearly used as a woman’s name. The singer pleads to “bring back that sunny day.”

There’s a steady rise in the name’s use, with a handful of cover versions helping to boost the name, from 1968 onwards.

In 1975, comic book readers met Storm, one of the X-Men. And yup, her superpower? It’s the ability to control the weather.

She’s crazy powerful. Born Ororo Munroe, a Kenyan princess with an American father, she quickly becomes one of the X-Men’s most important characters. Halle Berry played her in the 2000 movie version; Alexandra Shipp starred as Storm in the 2016 version.

What tipped both names from sometimes-heard into the mainstream, so many years after the song?

It’s a tough question to answer, because there are countless references to the word. The 1990s brought us the Geo Storm, Desert Storm, and at least one professional wrestler by the name.

Let’s look back a little farther:

And, of course, Misty had been a Top 100 pick in the 1970s and 80s; Dusty saw some use for both genders around the same era, while the rhyming Rusty climbed for boys; and Sunny peaked for girls in the same era.

So let’s say this: a mix of pop culture associations eventually pushed both masculine and feminine forms into the US Top 1000. But they were seemed like fleeting trends, not lasting additions to the lexicon of baby names.

This name has been all over the headlines lately, thanks to the latest scandal from Washington DC. Adult film Hall of Famer (yup, that’s a thing) Stephanie Clifford is better known as Stormy Daniels, and word is that she had an affair with Donald Trump.

I suspect Kylie must have considered this when she named her daughter. Could it be why she opted for the ‘i’ spelling instead? Or did Kylie imagine the whole ugly scandal would be quickly forgotten? After all, if rumors are true, she’s had this name chosen for months.

Stormy: Everything Old is New Again …

And yet, here’s my big take-away from the name announcement.

It suggests that Kylie – and maybe her generation – are willing to consider reviving names long before conventional wisdom suggests they’re ready for a comeback.

Adam Levine and Behati Prinsloo named their daughter Dusty, a name that peaked in the 1970s. He’s not quite a millennial, but she is.

And so I wonder – do Stormi and Dusty herald a new generation of early retro revivals? Could the next few years bring us baby girls named Heidi, Wendy, Tanya, Dawn, Crystal and Brandy? Will their brothers be Troy, Keith, and Brian?

Somehow I don’t hear the boys’ names making quite the same kind of comeback. But maybe – just maybe – Stormi is the start of something.

Readers, do you think Stormi and Dusty are part of a new trend? Will we hear more 70s/80s names in revival in the next few years?