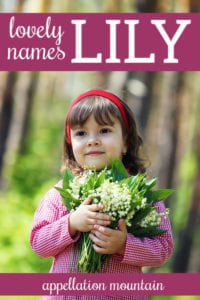 Lily names dot the popularity charts. There’s Lily, of course, a floral favorite. It combines the nature name appeal of River and Willow with the vintage style of Charlotte and Eleanor.

We associate the spring flowers with the Easter season, symbols of purity and virtue. But different varieties carry different meanings, from confidence to good fortune to abundance.

Layer in lots of fictional Lilys, from Edith Wharton’s Lily Bart to How I Met Your Mother’s Lily Aldrin. The name makes an enduring choice for a daughter, familiar across generations.

No question Lily stands on its own. But there are dozens of formal names for Lily. Imports from other languages, longer names that contain the sound, and more can all work with short, simple Lily.

Let’s look at all of the possible Lily names.

Lily, Lilly, Lillie – Lily is the most common spelling today, but Lillie and Lilly both have a long history of use. Once Lillie topped the charts. Nineteenth century actress turned royal mistress Lillie Langtry remains a captivating figure.

Lillian, Lilian – It looks like lilium, the Latin word for lily, suggesting that Lily comes from Lillian. However, the opposite might be true. It appears that Elizabeth shortened to Lily … and then Lillian evolved from there

Liliana, Lilliana, Lilyana, Lilianna, Lillianna, Lilyanna, Lillyana – Logical elaborations of Lily and Lillian abound, but how do you spell Liliana? Each of these has ranked in the US Top 1000 in recent years.

Lilith – Medieval legend tells of Adam’s first wife. Some versions make Lilith a demon. Others depict her as the archetype of a strong woman. (Hence the name of 90s music festival Lilith Fair.) It’s not related to the flower. Instead, Lilith comes from an Akkadian word meaning “of the night.”

Lilia, Lillia – Drop the ‘n’ from Lillian, and we have a name perfectly in step with current trends, a Lily version of all of those ends with -ia names.

NOT QUITE LILY NAMES

Delilah, Dalilah – The Plain White Tees made Delilah a hit.

Galilea – A name from the Biblical city of Galilee, Galilea also includes the right letters to get to Lily.

Lilou – A Lily-Louise smoosh, Lilou has been big in France. Luc Besson named one of his characters in The Fifth Element Leeloo. The 1997 hit movie boosted the name.

Liliosa – The name of a ninth century Spanish martyr and another name directly related to the lily flower. It might shorten to Lola, too.

Lileas, Lilias – Liliosa is the Spanish; this is the Scottish.

Liliane – The French Liliane is the given name of actor Leelee Sobieski.

Lilwen – A Welsh name, Lilwen marries the best of the Lily names with the Welsh Gwen and company. If Arwen and Eowyn appeal, this name might also belong on your list.

Lilikoi – From the Hawaiian name for the passion fruit.

Lilavati – A Sanskrit name that means charming, Lilavati is rare but accessible.

Elizabeth – Do we really need another nickname for Elizabeth? There are scads! And yet, Lily started out as a short form of this venerable classic.

Elinor – If Elizabeth can lead to Lily, why not Elinor?  The ‘li’ is right there, just as with Elizabeth.

Lilibet, Lilibeth – It might be a Lily-Beth smoosh, or a slimmed down version of Elizabeth. Queen Elizabeth II was known as Lilibet as a young girl.

Lilliandil – A character from CS Lewis’ Voyage of the Dawn Treader, Lilliandil reigns as Queen of Narnia. But here’s a twist: Lewis didn’t name her. Not until the 2010 film adaptation did the character receive a name. It’s rarer than rare, but has potential.

Tigerlily – An unusual floral name, part-smoosh and part-bloom.  If you’re looking for a fierce spin on a girls’ nature name, Tigerlily might be the one.

What are your favorite Lily names? 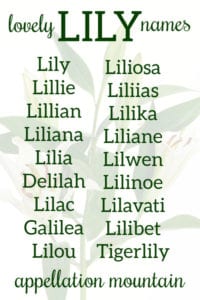 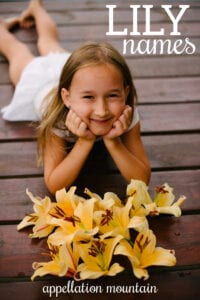