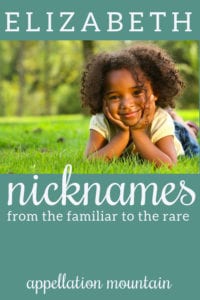 Elizabeth nicknames range from the automatic Lizzie to the unexpected Birdie and Bess.

With so many centuries of use behind it, classic Elizabeth has developed dozens of short forms, across multiple languages. That makes it evergreen, but also surprisingly versatile.

Many Elizabeth nicknames now feel like stand-alone options in their own right. Others read like imports, more expected in German or French.

But with so much history, we expect Elizabeth nicknames to range from the obvious to the obscure.

It’s one strength of choosing a classic given name for a child.

Read on for some great, unexpected Elizabeth nicknames – plus a few familiar favorites.

A French nickname for Elizabeth, by way of that strong B sound. It’s also used – perhaps more logically – for Barbara. Celebrated 1987 film Babette’s Feast won the Oscar for Best Foreign Language Film. (The movie was Danish, but the character Babette hails from Paris.) While we love -ette ending names for girls, Babette hasn’t been heard in the US since the 1960s.

That strong B sound suggests that just the initial might do as a nickname.

Tess is having a moment, while Bess remains in limbo. This nickname has been associated with Elizabeth for ages; Queen Elizabeth I of England was sometimes called “Good Queen Bess.”

A long-time favorite, immortalized by a Kiss ballad, Beth has faded in recent years, but remains a classic among Elizabeth nicknames.

It looks like Beth Anne, but Bethan is a traditional Welsh short form.

Betsy feels sparky and unexpected, a fresh-faced retro name that could grow up just as easily as Nancy or Wendy.

Short Elizabeth to Bettina, but then add an -ina, and you’ll arrive at Bettina. It sounds vintage, delicate, and completely unexpected.

Mad Men’s Betty Draper failed to revitalize this Elizabeth nickname. But now Blake Lively and Ryan Reynolds have given it to their youngest daughter – and Taylor Swift revealed her name in a song. That might make Betty the new Sadie, but regardless, it remains a traditional nickname for Elizabeth.

We tend to think of Billie as short for Wilhelmina, or maybe as a stand-alone feminine form of William. But it’s occasionally connected to Elizabeth, too, an unexpected but appealing possibility.

Mad Men’s Elizabeth “Betty” Draper was sometimes Birdie, at least to (former) husband Don. It’s not just the show, either – Birdie appears on Elizabeth nickname lists over the years. If you love bird-inspired choices, but want a formal name to fall back on, Elizabeth called Birdie might be the perfect choice.

It’s said that Buffy comes from Bethie. But it really comes from 1960s sitcom Family Affair, which introduced three adorable children – Catherine, Jonathan, and Elizabeth, better known as Cissy, Jody, and Buffy. Following their parents’ death in a car crash, they move to New York City to live with their Uncle Bill. Hilarity ensues. Decades later, Buffy the Vampire Slayer proved that this Elizabeth nickname has bite.

The sound is there – the strong B, the scissory S/Z. But Busy mostly makes this list because we think of actor/author/social media star Busy Philipps, born Elizabeth.

The hero of the Legally Blonde movies-turned-musical, resourceful and stylish Elle Woods, boosted her name. But it tracks with how we shorten names in the US – Benjamin becomes Ben, Katherine is Kate, and Louisa ends up just Lou. So Elle works beautifully.

Popular Ellie – it’s ranked in the US Top 100 since 2011 – works for all the same reasons that Elle succeeds.

The Frozen figure has made her stylish name internationally known. But perhaps it’s made parents hesitate, for fear that they’ll really never hear the last of “Let it Go.” The German and Scandi nickname comes more naturally from Elisabeth – with an s – but it feels like a powerful pick no matter how Elizabeth is spelled.

Sparky Elsie belongs with vintage favorites. Like Elsa, it follows naturally from Elisabeth-with-an-s. But it’s also a stand-alone name, a Top 100 pick in the US from 1880 into the 1930s. Appropriately, it’s a Downton Abbey name, too – though the character is almost exclusively called Mrs. Hughes.

The first letter of Elizabeth may be E, but the first sound is El. Factor in that strong B, and Libby has long served as one of the traditional Elizabeth nicknames. While it’s seldom heard today, it fits right in with Abby, Gabby, Maddie, and Addie.

Former US Senator and Secretary of Transportation Elizabeth Dole is often known as Liddy to the public. It’s a childhood nickname that stuck. Fans of 30 Rock might remember than Jack and Avery named their daughter Elizabeth “Liddy,” inspired in part by Dole.

A German nickname for Elisabeth, Liesel is familiar the world over thanks to The Sound of Music. Though the eldest von Trapp daughter spelled it Liesl. Either way, it’s one of those surprising choices that everyone knows, but no one uses.

Some will insist that Lily is a nickname for Lillian, and linking it to Elizabeth is just too much. But actually, it’s the other way around. Lily started out as one of many Elizabeth nicknames. Lillian is an elaboration of Lily.

Queen Elizabeth II’s childhood nickname – Lilibet – reminds us that the Lily-Elizabeth link is long-standing. Now that Meghan and Harry’s daughter – the queen’s great-granddaughter – is named Lilibet Diana, this is one of the Elizabeth nicknames in the spotlight.

A 1960s favorite, Lisa started out as a short form of Elisabeth. Unlike some choices on this list, it’s easy to see how the nickname evolved.

Smoosh the sounds of Elizabeth just a tiny bit, and you’ll arrive at Lizbeth. It sounds like a rushed together pronunciation of the name, but it works as a nickname, too. It’s also bestowed independently. Think of Stieg Larson’s fictional hacker-hero Lisbeth Salander of The Girl with the Dragon Tattoo and sequels.

Liz and Lizzie – or Lizzy – serve as the immediate, automatic Elizabeth nicknames. From Lizzie Borden to Liz Lemon, women – real, fictional, and somewhere in-between, have been Liz across the ages. For every wholesome Lizzie Maguire or polished Liz Claiborne there’s a sultry Liz Taylor or edgy Liz Phair.

Strictly speaking, Liza peaked as an independent given name in the 1970s. But it never really caught on. Credit for the 70s peak goes to Liza Minnelli, daughter of Hollywood legend Judy Garland and an Oscar-winner in her own right. Today Liza feels both vintage and slightly undiscovered – a name everyone knows, but no one is using.

Maybe Lizzo is more like Cher – a mononym too big to belong to more than one person. Singer Lizzo was born Melissa Viviane Jefferson, but it’s easy to imagine an Elizabeth answering to Lizzo, too.

T seems an unlikely letter to inspire Elizabeth nicknames. Except the sound is there. And if Elizabeth can be Bess, is Tess really so far away?

As Tess is to Bess, Tetty is to Betty. The difference is that Tetty surfaces in the historical record, particularly in the 1700s. It’s all-but-forgotten today. And yet, with Theodora on the rise, Teddy sounds like Teddy – which has some promise.

Take the last two letters, add the first letter, and then tack on an ‘a’ and – ta da! Thea emerges as an unconventional Elizabeth nickname.

We love Z names, and Elizabeth’s strong Z sound offers several. The ZAB is right there, smack in the middle of the name.

Shift the Z from the middle to the front, and maybe – just maybe – Zella works. But in our age of Stella, Bella, and Ella, Zella is just as likely to stand on its own.

What do you think of these Elizabeth nicknames? Are there others that should be on the list?

First published on March 11, 2016, this post was revised substantially on May 17, 2020. Additional revisions and re-publication followed on December 1, 2020. 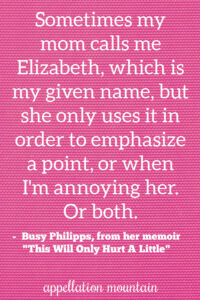 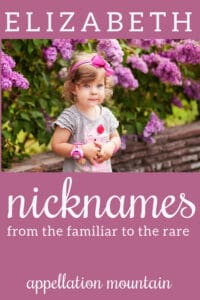