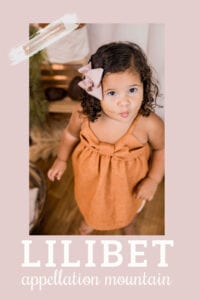 The baby name Lilibet made headlines in June 2021 when the Duke and Duchess of Sussex gave it to their second child.

Our Baby Name of the Day is in honor of Lilibet Diana Mountbatten-Windsor’s birth.

We tend to think of Lily as short for Lillian, and Elizabeth as a completely separate name.

But chances are good that Lily was one of the dozens of nicknames that emerged from Elizabeth across the ages. Lillian likely developed as an elaboration of Lily – not the other way around.

Born Princess Elizabeth Alexandra Mary of York in 1926, the current Queen of England was never expected to reign. After all, her uncle ascended the throne in 1936. All assumed he would marry, having children of his own to inherit. Elizabeth and her younger sister, Margaret Rose, would likely have faded into the background.

But then King Edward VIII abdicated, when Princess Elizabeth was just ten. Her father inherited the throne as King George VI.

Fast-forward to 2021, and Queen Elizabeth II is the longest-reigning British monarch. In June of 2022, she’ll celebrate her Platinum Jubilee – seventy years on the throne.

How does this connect to the baby name Lilibet?

And now, it’s the name that Harry and Meghan chose for their daughter, as a way to honor her great-grandmother.

Meghan and Harry put the baby name Lilibet on their daughter’s birth certificate, but they weren’t the first.

A handful of girls received the name in the 1980s and 90s, though there have been fewer than five born annually over the last two decades.

Odds are that more women answered to the nickname Lilibet, but relatively few have been given the formal name.

The royal couple plans to call their daughter Lili. It offers the same kind of casual charm as her older brother’s name, Archie Harrison Mountbatten-Windsor.

And, as with Archie, it’s a trending name.

Lily and company have dotted the US Top 100 and Top 1000 for much of the twenty-first century. It’s become a near-classic for girls, an ecovintage name that we’re used to hearing. But many of the formal options, like Liliosa and Lilwen, are nearly unknown.

It’s a great strategy for naming a child: blends-in nickname for everyday use; stands-out formal name when you want one.

The baby name Lilibet feels a little like a Lily-Bette smoosh, and there’s something sophisticated in the -et ending.

But it’s also casual, a nickname-name promoted to given name status.

It fits with -et ending girl names like Scarlett and Juliet. But it also feels like a tailored, vintage gem, a sister for Evelyn or possibly Simone.

All combined, it’s a casual charmer. It’s hard to go wrong with sweet and stylish Lilibet.

What do you think of the baby name Lilibet? Would you consider it for a daughter? 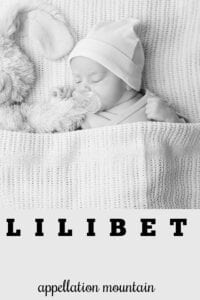