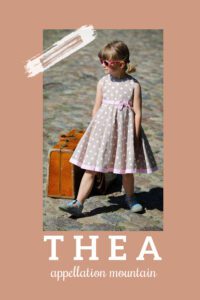 The baby name Thea brings to mind a goddess and an astronomical theory. It’s a jazz-age name enjoying a perfectly-timed revival in the 2020s.

Theodore ranks in the US Top 100 for boys. It comes from the Greek, meaning “gift of God.”

Dorothea and Theodora are feminine forms. They’ve never quite rivaled Theodore in terms of popularity. Though Dorothy, yet another variation on the name, was a long-time Top Ten pick in the early 1900s.

The runaway popularity of Theodore has helped both Dorothy and Theodora gain in use.

But it’s Thea – the feminine equivalent of Theo – that is really soaring.

THEO and MIA and LEAH

After all, Thea fits with our love of brief and complete names like Mia and Leah.

Plus, plenty of parents are naming their boys just Theo, instead of the full Theodore.

If you’re after a name that’s impossible to shorten, but still rich in sound, the baby name Thea fits right in with current favorites.

As it happens, the baby name Thea enjoys more popularity in the twenty-first century than in the past.

From 1880 through the 1960s, the name sometimes appeared in the US Top 1000, always in the 600s, and usually much higher. For long stretches, the baby name Thea simply failed to chart.

That doesn’t mean there were no Theas. But never before had it been broadly familiar. It’s possible, of course, that other names – not just Theodora and Dorothy, but Cynthia, Althea, and more – had been shortened to Thea.

That’s still far more familiar than the name was in years gone by.

Spell it Theia, and it becomes a goddess name.

She’s a Titan, daughter of Gaia – the primordial earth goddess, and wife to Hyperion. Theia was mother to sun, the moon, and the dawn, too.

Here’s were it gets even more interesting.

There’s a theory about the formation of our moon that relates to Theia.

Scientists posit that about four billion years ago, our young Earth collided with another planet. The planet’s name? Theia.

The Moon formed from the collision’s debris.

That would make Theia the mother of the moon in both myth and our solar system today.

While the baby name Thea has never been common, it surfaces across the centuries:

A few fictional uses include:

In English, the baby name Thea is most often pronounced THEE uh. It’s worth noting that Spanish language speakers may say TAY uh instead.

Sparky and storied, the baby name Thea could be the perfect choice for parents seeking something traditional but vibrant, familiar but distinctive, and stylish but straightforward, too.

What do you think of the baby name Thea? 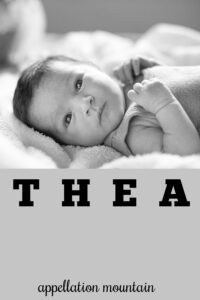