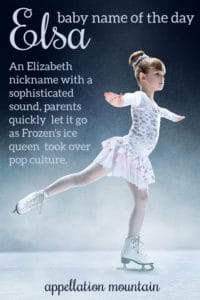 Elsa once appeared mostly on lists of seldom-heard Elizabeth names.

First things first: this isn’t a completely unknown form of Elizabeth. The name has appeared in the US Top 1000 every year since 1880, though most years the name has charted at #500 or above.

It’s a logical choice for the character. Elizabeth feels quintessentially royal. In much of Europe, the name is spelled Elisabeth, with an ‘s’ instead of a ‘z.’ That makes Elsa as logical a short form as Eliza.

Given Frozen’s semi-Scandinavian setting, the name fits. It’s known throughout Scandinavia and beyond; the movie’s locations were based on several real-life Norwegian settings.

Unlike some princesses, Disney named this character from scratch. While the story is based on The Snow Queen fairytale, she’s not named in the original tellings. In any case, the version we know in Frozen evolved dramatically from the villain of the original story, so a new name was in order.

Long before we ever belted out the lyrics to “Let It Go,” another musical Elsa gets credit for the name’s popularity.

Richard Wagner’s 1850 opera Lohengrin increased use of this name in the English-speaking world.  She’s Wagner’s unforgettable heroine, the first bride ever to marry to the famous Bridal Chorus, better known as Here Comes the Bride. Queen Victoria’s eldest daughter, Victoria, chose it when she wed Prince Frederick William of Prussia in 1858. It started a tradition that continues today.

Lohengrin’s story is a tragic romance. Elsa – like her Arendelle counterpart – is set to inherit, in this case as the Duchess of Brabant. But this time, the heroine must marry and is eager to avoid her chief suitor. Lohengrin appears, by magic, on a boat drawn by swans. The only condition of their happy union? She can never ask about his origins.

They live happily ever after, until the love-struck bride caves, haunted by rumors of her husband’s past. She asks. He answers – truthfully – but then leaves forever.

The Swan Knight appeared throughout medieval folk tales, and Lohengrin is first mentioned by name in Arthurian legends around the thirteenth century. But it looks like Wagner either chose the Duchess of Brabant’s name himself, or borrowed it from one of many versions.

The opera debuted in New York in 1871, and the name was established as a familiar, but not too common, choice for a girl by the late nineteenth century.

A handful of others add to the name’s appeal:

In the 1960s, Elsa was best known as the orphaned lion cub whose return to the wild is profiled in Born Free, the book and later movie. The title song even won the Academy Award for Best Song, and the movie also picked up the award for Original Music Score.

And yet, today none of these figures are nearly as instantly familiar as the Disney princess.

In recent years, the name has been popular from Spain to Sweden to France, a nicely pan-European choice. A handful of Mexican notables answer to the name, too.

One more fun fact? Orchid enthusiasts use it as an informal name for the orchid Elearethusa.

Heading into 2010, Elsa rose steadily. Connecting to Elizabeth kept it classic. It owed something to the rise of Ella, too. But the sound felt distinctive and different. It carries a sophistication, like Sophia. And it fits with liquid names, the Siennas and Elenas we’ve embraced.

Then along came Disney to sprinkle this name with a heap of pixie dust.

From December 2013 onwards, Frozen was everywhere. There’s a ride and a meet-and-greet at Walt Disney World; the character graduated to ABC’s Once Upon a Time in late 2014; merchandise related to the movie can be found everywhere. And now there’s the sequel, coming in late 2019.

All of this could point to a smash-hit of a girl name, and indeed, it doubled in use from 2013 to 2014, in the first wave of Frozen fever.

It’s worth noting that the Disney Princess effect isn’t so straightforward.  Plenty of parents quickly declared Elsa “ruined” as a real girl’s name thanks to the movie.

With so much history and charm, it’s feels like Elsa could have gone either way. But even in our age of Khaleesi and Leonardo, Elsa remains too deadly-wedded to the blockbuster movie for parents to consider it for a daughter. Maybe that will change in another decade or three?

Would you ever consider Elsa? Or is it just too Snow Queen? 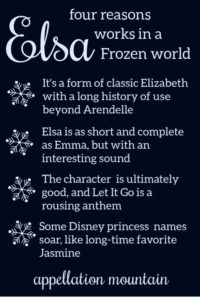