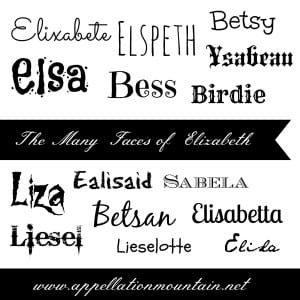 Last year, I wrote a post about the Many Faces of Adelaide.  After writing yet another post about a name related to Adelaide, it hit me that there were so many forms of the name, from obscure forms long out of use to diminutives that were unfamiliar – but wearable – in English.

In a recent Facebook thread, Sarah mentioned that the same was true for Elizabeth, and suggested I write a similar post about this venerable name.

It seemed daunting at first.  As any good name nerd knows, Isabella and Elizabeth are cousins.  But which is the variant, and which is the original?  It is a harder question to answer than you might guess, so for this post, I’m considering Isabella a separate name – that just happens to share many of these nicknames and variants.

Belsante – I’ve seen Belsante interpreted as a form of Elizabeth and Isabella, and I’d filed it away as such.  But that might be misinterpretation by modern eyes.  British Baby Names has another source for Belsante, one that feels more likely.  And yet, Belsante is definitely old school and might – at least some of the time – relate to the name in question.  So she makes the list.

Isabeau, Ysabeau – Another one that seems more clearly related to Isabella and company, Isabeau was heard in medieval France.  A few pop cultures references have boosted her profile – the movie Ladyhawke and the Deborah Harkness supernatural/historical bestselling All Souls trilogy – and yet she’s still exceedingly rare.

Bess – As simple as Tess, as good as Queen Bess, and worn by a companion of girl detective Nancy Drew.  It’s almost surprising that this slim, trim nickname name hasn’t heard more use.

Bessie – Whoa! Could Bessie be a sister for Sadie, a future prom date for Archie?  She seems too cutesy of a nickname to consider – but then, Hattie and Maisie and Millie all stand on their own nowadays.

Betty – The frosty former Mrs. Draper of Mad Men fame but Betty back in the spotlight.  She’s always been a little bit of a bombshell – think Grable and Boop.

Betsy – She’s the flag-stitching good girl alter ego of pin-up Betty.  She may be a Girl Scout, but Betsy has an upbeat, adventurous spirit.

Birdie – Avian names are huge, so it wasn’t a total shocker when Busy Philipps put Birdie on her baby girl’s birth certificate.  Busy is, as it happens, an Elizabeth.  But while that’s a one-of-one kind of name, I’ve heard enough connections between Birdie and Elizabeth to put her on the list.

Buffy – Fluffy Buffy was a cheerleader – and vampire slayer.  Still, Buffy and Muffy still seem trapped in the pages of the Preppy Handbook, rarely bestowed as an independent name in recent years.

Ellie – Ellie is Buffy’s opposite, a nickname name on the upswing.  Over 3,300 Ellies were born in 2012, and that’s not counting girls called Ellie who answer to one of many formal name possibilities.

Elsie – For years, Elsie was stuck in the meadow, a reliable name for a cow.  But she’s had a revival in recent years, boosted in part by Lauren Conrad, who answered to the initials L.C.  Now she’s making a dramatic comeback, reaching #395 in 2012.

Libby – While Libby’s heyday is in the past, she’s still a widely accepted short form for Elizabeth.  Plus, Libby fits right in with Abby and Gabby – perfectly wearable in 2014, and much less common than Ellie.

Elizabeth: Classics in Their Own Right

Beth – Plenty of Beths have actually been Elizabeth – but not all.  Ever since Kiss recorded power ballad “Beth” in 1976, it seems easier to think of her as a stand-alone name.  She’s less dated than Karen, more classic than Brooke.

Eliza – The given name of the indomitable Miss Doolittle of My Fair Lady, it is easy to love Eliza – classic, but spunky.

Lisa – It seems strange to think of Lisa as a classic, but between da Vinci’s Mona Lisa and Lisa’s #1 status through the 1960s, why not?  She stands on her own as a complete name – even if she is in mom name territory today.

Liza – Hollywood star Judy Garland and her director husband Vicente gave this name to their daughter in 1946, making this a starbaby name.  Liza Minnelli became a star in her own right – she’s won an Emmy, a Grammy, an Oscar, and a Tony – and proved that this name stands on its own.

Elizabeth: The Next Generation

Ailsa – The Scottish Ailsa is probably borrowed from a place name, but some have connected to Elizabeth over the years.  (If you’re curious, the place is an island known as Ailsa Craig, and a bird sanctuary today.

Alizabeth, Alyzabeth – Yes, I know.  They’re non-standard spellings.  But in our age of Alivia, it seems foolish to ignore the possibility of respelling a popular name with an A.  Plus, in this case, there are plenty of international forms of the name that do start with an A in a foreign language.  Alizabeth and even Alyzabeth aren’t such a stretch.

Elsa – She’s a short form of Elizabeth in several languages, with a Scandinavian feel – so we could file her with Libby and Ellie.  But in our age of Disney mega-hit Frozen, I think Elsa feels like a next generation name.

Bettina – There’s something teacup-delicate about Bettina, a name sometimes related to Elizabeth and sometimes to Benedetta, an Italian feminine form of Benedict.  In the 1940s, the impossibly elegant French fashion model Simone Bodin used this as her professional name.  You might not recognize her name, but you probably know her face – Bettina worked extensively with a young Givenchy – giving her a haute couture vibe, too.

Elisheva – Probably closest to the original Hebrew, along with Elisheba.  Her -eva ending could make her quite stylish in 2014.

Liana – Liana doesn’t quite sound like she fits on this list, does she?  But as forms change and evolve, Liana can tie to Elizabeth – as well as Juliana and Eliana and lots of other possibilities.

Lily, Lilly, Liliana – As a young girl, Queen Elizabeth II was known as Lilibet.  She’s not the only one, either.  Just as Margaret can answer to Daisy, there’s a long tie between Elizabeth and Lily, in all of her forms.

Sabela – Yes, she’s closer to Isabella.  But file Sabela and Sabella with Elizabeth’s cousins, an unexpected spin on the name.  Actors Roselyn Sanchez and Eric Winter have a daughter named Sebella Rose.

Tetty, Tibby, Tatsy – These could all fit on the old school list or the nickname list – they’re diminutives that we just don’t hear nowadays.  They all have a certain charm, though – and if you’re looking for a really unusual way to revive the name, any one of these could work.

Ysaline – One of my favorite out-there middles, possibly connected to this family of names via Isabel and company.

Ealisaid – The Isle of Man sits in the Irish Sea, between Ireland and England.  The native language is Manx, a cousin to the other Gaelic tongues.  The pronunciation is something like AYL eh sehd.  She made British Baby Name’s Clunky Celtic list, and I think that’s a good description of her.

Elisabeth – Nearly as familiar as Elizabeth with a ‘z’ and the spelling preferred in French, as well as Dutch, German, Norwegian, and several other European languages.  Thanks to a few high profile uses of Elisabeth-with-an-s, she’s just as wearable in the US.

Elisabetta – Elaborate Elisabetta is an Italian form of the name, a sister for Francesca.  There’s also Isabetta, an ever rarer form.

Elisaveta – There’s something sleek and exotic about Elisaveta, the Bulgarian form of the name.

Eliska – The Czech equivalent of Eliza looks a little unusual at first, but just listen to her: eh LISH ka.  The correct spelling includes a diacritic mark: Eliška.

Elixabete – Want to avoid the nickname Lizzie?  Elisabeth is an option, but there’s also Basque spin on the classic, the intriguing Elixabete.  Only trouble is that the Basque pronunciation is more like ee lees ah BEH tay.

Elsbeth, Elspeth, Elspet – A contracted form of the name, most commonly heard in Scotland.

Liselotte, Lieselotte – Smoosh together Lisa and Charlotte and you’ll arrive at this clunky German possibility, less common than Anneliese.

Lisbeth – Demure Elizabeth takes on another dimension when she drops her ‘e’ – suddenly, she’s Lisbeth Salander, The Girl with the Dragon Tattoo.

I’m sure I’ve missed oodles of Elizabeth names.  Which ones would you add to this list?  Which ones can you imagine using?