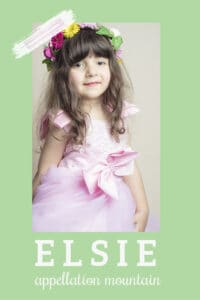 Thanks to Zooey Deschanel for inspiring our Baby Name of the Day.

To find the meaning of the name Elsie, we have to go back to the evergreen Elizabeth.

Elizabeth appears in both the Old and New Testaments. It comes from the Hebrew Elisheba or Elisheva – “my God is an oath.” That’s sometimes interpreted as promise or vow, too; it’s an appealing meaning.

It becomes the Greek Elizabeth by the New Testament.

Even if you’re not a regular church-goer, that might ring a bell. She’s the mother of John the Baptist, and cousin to Mary.

The Biblical figure explains why the name has remained widely known across the centuries.

Queens and saints have answered to the name, including the twelfth century Saint Elizabeth of Hungary, and the legendary Queen Elizabeth I of England. (To say nothing of the recently departed Queen Elizabeth II.)

Plenty of related names have developed. The name’s most notable relation is Isabel, more common in England pretty much until the first queen by the name reigned.

The name’s popularity inspired dozens of nicknames, and that’s where the baby name Elsie comes in.

In plenty of languages, Elizabeth is Elisabeth, spelled with an S, including French, German, Dutch, and most of the Scandinavian languages.

Elsie could’ve come from any of those languages, and it is used in Sweden and Denmark by the nineteenth century.

But we often consider Elsie Scottish. Elspeth is a Scottish form of Elizabeth, contracted and smooshed down to just two syllables.

Elsie is the obvious short form of Elspeth, and both often appear on lists of Scottish baby names.

Of course, Elspeth has never appeared in the US Top 1000.

Why? During the nineteenth and early twentieth century favorites, Elsie reigned as a pop culture phenomenon.

Women by the name from around the turn of the twentieth century are plentiful, including:

ELSIE ON THE FARM

Now we have to talk about a cow.

Borden, Inc. was a huge food company with an emphasis on dairy. In the 1930s, they chose this name for their bovine mascot.

Elsie was a star of the World’s Fair in 1939, and made her movie debut in 1940’s big screen adaptation of Louisa May Alcott’s Little Men. For a few years, the famous cow and family made their home at Freedomland USA, a theme park in the Bronx.

The barnyard association may have cratered the name. By 1975, it had left the US Top 1000 entirely.

It’s tough to say precisely how many women have answered to Elsie over the centuries. Plenty of them would’ve been Elizabeth on their birth certificates.

From the 1970s into 1990s, the number of girls named Elsie reached an all-time low in the US, hovering at or just above the 100 births/year mark. It was in old lady territory, and not in grandma chic way.

It fell out of favor in the UK, too. Though the pop culture associations would’ve been different. Long-running British soap opera Coronation Street included original cast member and central figure Elsie Tanner. She’s feisty and strong, a major figure on the show from the 1960s into the 1980s. And while the actress who played her, Patricia Phoenix, passed away in 1986, Elsie Tanner’s children have appeared in story lines  in more recent years.

It’s also true that the baby name Elsie returned to favor in the UK more quickly. It’s been a Top 25 choice in England & Wales since 2018.

American parents have been slower to warm to Elsie, but by 2005, it had returned to the US Top 1000.

In 2020, actress Zooey Deschanel announced that she and husband Jacob Pechenik had welcomed daughter Elsie Otter. That year, the baby name Elsie ranked #233. It rose to #221 as of 2021.

What explains the name’s comeback?

It probably helps that, by the 1990s, the Borden company had receded from the public eye. While both the brand and the spokescow remain visible, they’re far less familiar today.

Much of Elsie’s renewed appeal is about the rediscovery of sparky nickname names, like Sadie.

What happened in 2004? Lauren Conrad first appeared on MTV reality show Laguna Beach. By 2006, she was a major reality star on The Hills. Her nickname is L.C. Her initials also became the name of her fashion line for Kohl’s.

While Conrad can’t get all the credit for the name’s resurgence, it seems like L.C. helped give Elsie a new, fresh image – and shake off the barnyard for good.

We love El names, and vintage nicknames like Goldie and Birdie continue to catch on. Elsie sounds like an obvious member of the family, a vintage darling with charm to spare.

It could be short for Eloise, as well as Elizabeth/Elisabeth, and Elspeth, of course.

But it’s often not. And a new group of Elsies continue to keep the name in the spotlight. It’st he name of the housekeeper in Downton Abbey, though Elsie Hughes is usually just Mrs. Hughes – at least in early seasons of the tv series.

Young American actress Elsie Fisher is a rising star, known for roles in 8th Grade and The Addams Family and for voicing the character Agnes in the Despicable Me films.

It’s all contributing to the rise of Elsie, a sparky favorite that feels ready for a return to the spotlight.

What do you think of the baby name Elsie? 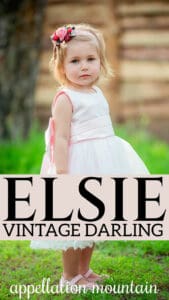 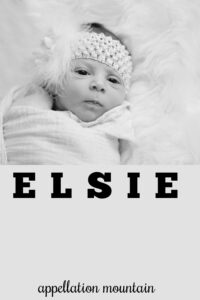